The outbreak of the new coronavirus has sent the number of passengers on domestic and international flights plunging more than 95 percent from a year earlier during Japan's Golden Week holidays, Japanese airlines said Friday.

Faced with stay-at-home and business closure requests under the current nationwide state of emergency declaration, the number of domestic flight passengers fell to 124,000, down 95 percent, during the holiday period from April 29 to May 6. Travelers on international flights dropped by 98 percent to 8,700, partly due to travel restrictions imposed by countries amid the epidemic.

The Golden Week holidays are normally a time for people in Japan to return to their hometowns or take trips. 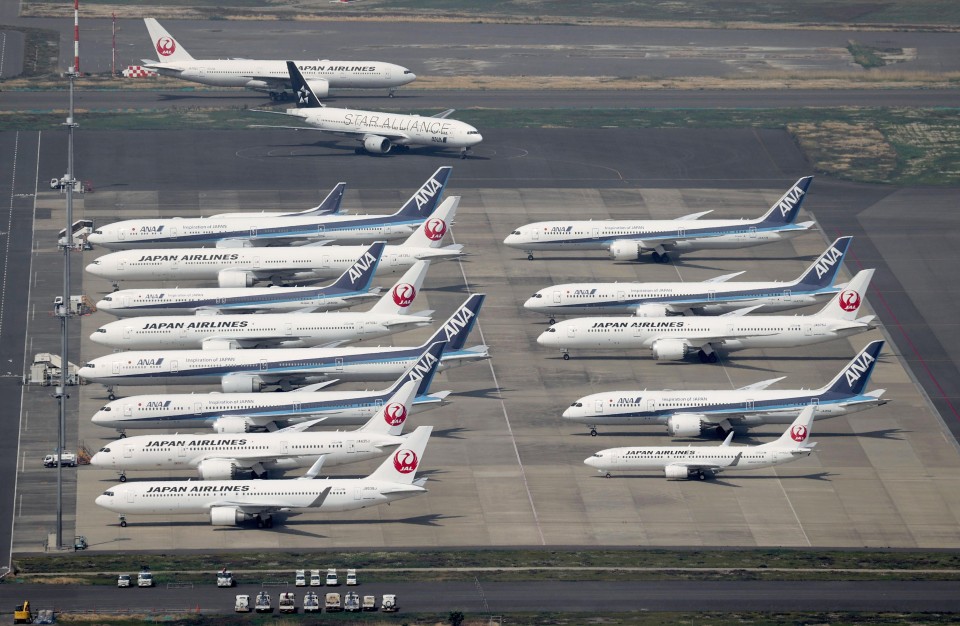 Photo taken from a Kyodo News helicopter shows planes in parking slots at Tokyo's Haneda airport on April 30, 2020, amid the coronavirus pandemic. Japan Airlines Co. said the same day its January-March group net loss came to 22.9 billion yen, marking its first quarterly loss since its stock was listed again in 2012.

Japan Airlines said a total of 47,646 people, down around 95 percent from a year earlier, and 2,030 people, down about 99 percent, boarded domestic and international flights.

The seat occupancy rates dipped below 20 percent on many flights during the period, with ANA seeing a 19 percent drop and JAL a 15 percent fall, according to the airlines.

Data from six major railway companies in the country showed Thursday that the number of passengers on shinkansen bullet and limited express trains during this year's Golden Week holidays plunged 95 percent from a year earlier.

The figure was the sharpest decline for the period since their establishment in 1987 through the privatization of the former state-owned railway company.