Bankruptcies due to the effects of the new coronavirus sharply increased in Japan in April, with the number reaching nearly 90, especially affecting small and medium-sized firms in the tourism and accommodation sectors, a recent survey showed.

As of Friday, the number of bankruptcies linked to the spread of the virus totaled 114, compared with 25 at the end of March, according to the survey conducted by Tokyo Shoko Research.

After Prime Minister Shinzo Abe declared a state of emergency in April, the Japanese economy has been affected by stay-at-home and business closure requests.

The 114 bankruptcies happened in 35 out of Japan's 47 prefectures and at least half of them were small in scale, with debts of less than 300 million yen ($2.8 million), the survey showed. 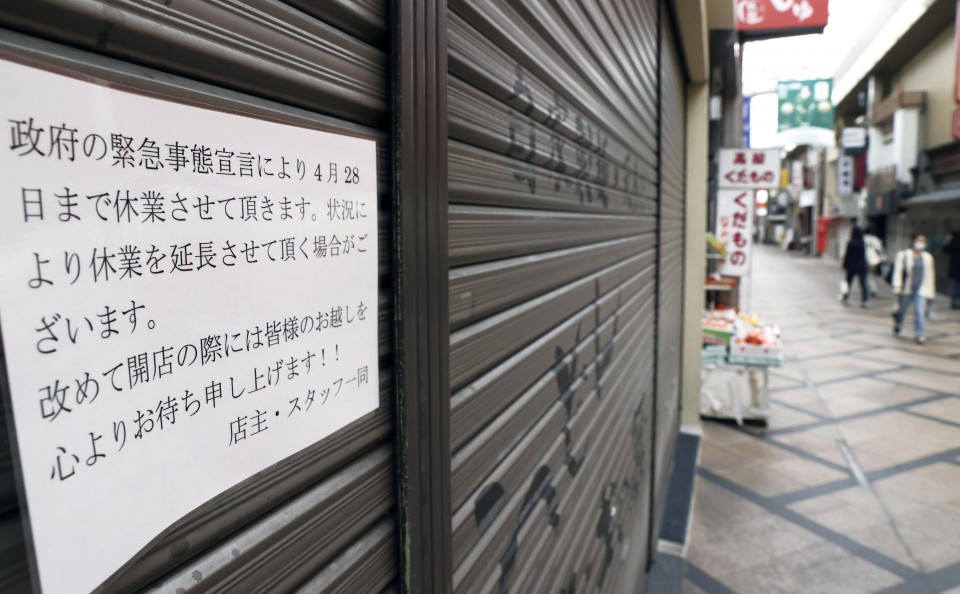 Photo taken April 18, 2020, shows a note put on the closed shutter of a store near Nara Station in western Japan, informing customers of its closure under a nationwide state of emergency over the coronavirus pandemic.

Of the total, 26, the largest portion, were from the accommodation sector, followed by 16 among eateries and 10 among apparel companies. By region, 38 bankruptcies, or over 30 percent, were filed in Tokyo and its surrounding areas.

Business failures stemming from the COVID-19 outbreak are feared to rise as authorities continue to ask people to stay home as much as possible and to tighten border controls, sharply reducing spending by foreign and domestic tourists and consumers, analysts said.

On Monday, Abe extended the state of emergency by more than three weeks through the end of May, in a further blow to the tourism and dining-out industries.

While it is not included in the latest survey, the credit research entity said there were more than 50 bankruptcies of companies with debts of less than 10 million yen in April alone, including those caused by the outbreak of the virus, in a sign that COVID-19 is taking a toll on firms smaller in scale.

In addition to large falls in revenues, fixed costs in forms of rent and wages are also squeezing small and medium-sized firms.

Nearly 40 percent of small companies polled in a late April survey by the research firm said they are worried about payments, such as for salaries and purchases, that are due "within three months."

The government has taken steps to support struggling companies, enacting an extra budget for fiscal 2020 late last month to finance an economic package.

Under the package, small firms which have seen revenues cut by a half due to the virus pandemic can apply to receive up to 2 million yen in cash, starting from Friday.

But a Tokyo Shoko Research official said that despite the support measures, companies will still find it difficult to assess when they can repay loans as it remains uncertain when the virus will be contained.

"More companies may choose to close down their businesses," the official said. 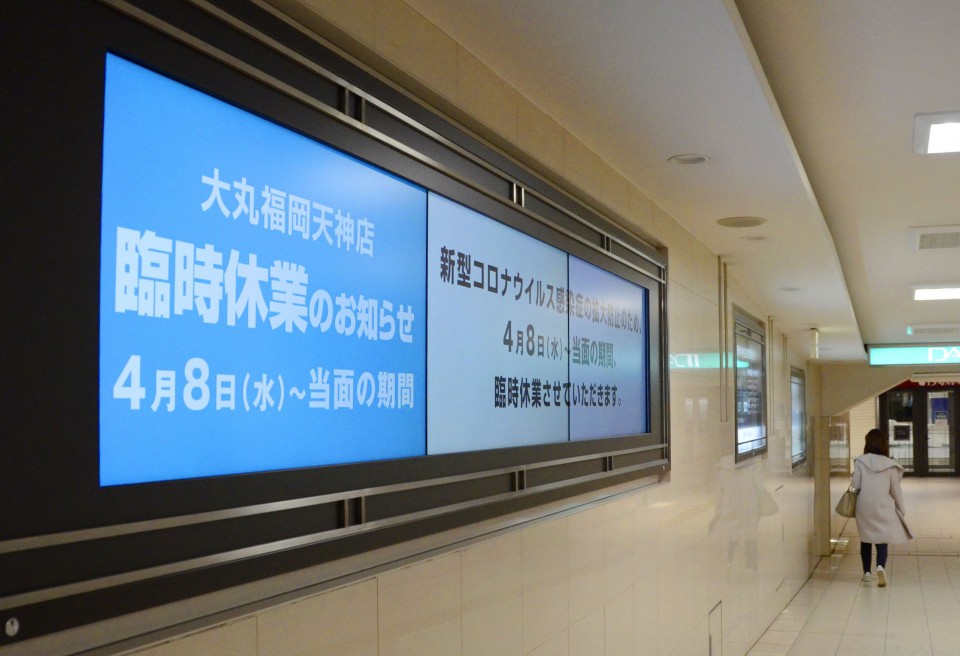 A screen at a Daimaru department store in Fukuoka, southwestern Japan, shows a temporary closure notice on April 8, 2020, a day after Prime Minister Shinzo Abe declared a state of emergency for Tokyo, Fukuoka and five other prefectures to curb the spread of the new coronavirus after an alarming growth in cases in urban areas.