Japanese Prime Minister Shinzo Abe on Thursday lifted a state of emergency for 39 of the country's 47 prefectures ahead of its planned expiration at the end of the month, paving the way for businesses to gradually resume operations as the spread of the new coronavirus has been kept in check.

Urban regions such as Tokyo and Osaka, however, will remain under the state of emergency and people will be asked to stay at home to ensure newly reported cases continue to fall and the burden on hospitals eases. 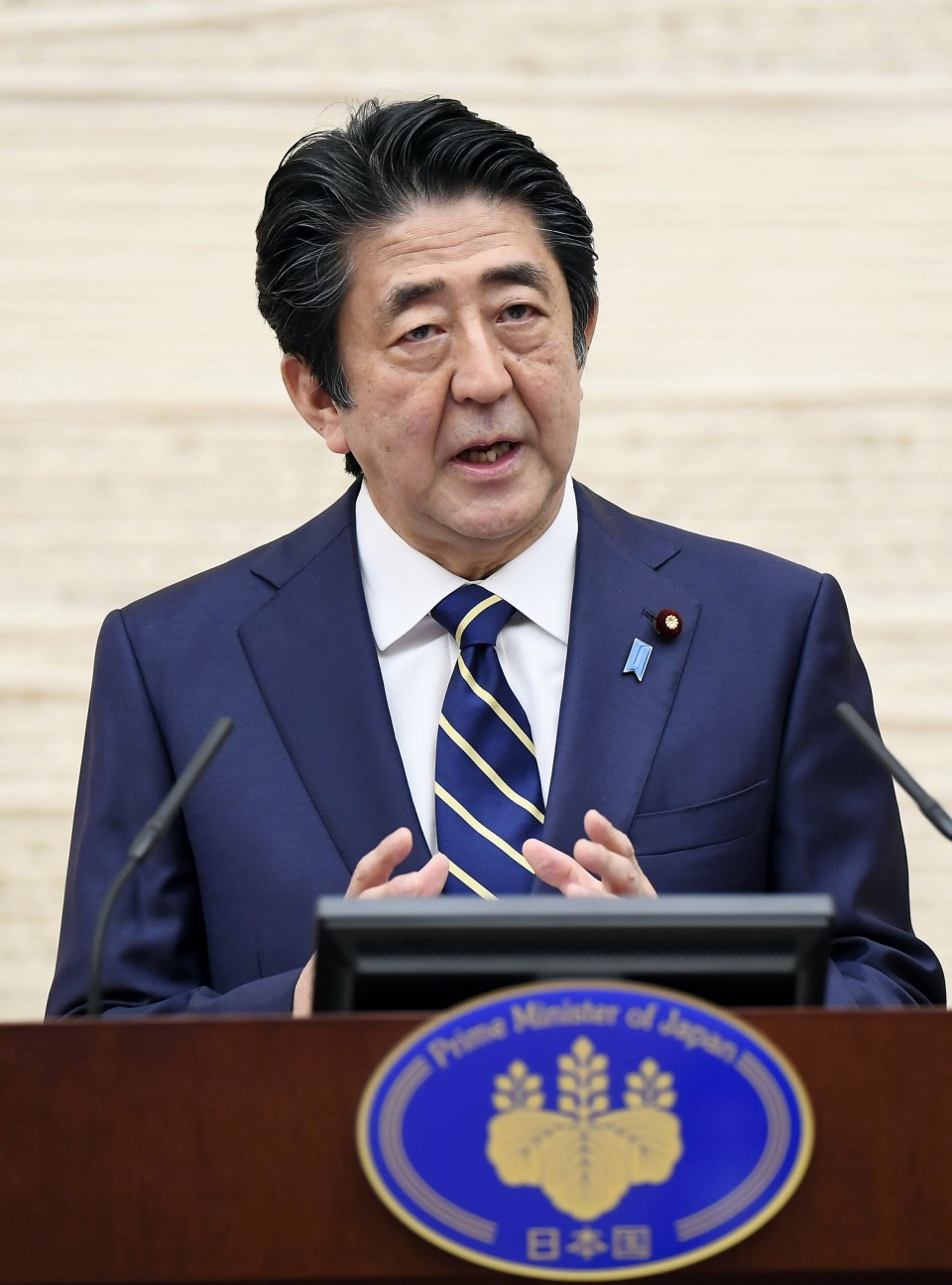 As Abe announced his decision to lift the state of emergency, he said the 39 prefectures have reached a point where the further spread of the virus can be averted, adding that they have the capacity to provide sufficient medical care and perform virus tests as needed.

"With the lifting of the state of emergency in many regions, today marks the real beginning of our efforts toward a new normal in the era of the coronavirus," Abe said at a press conference.

"We are embarking on an extremely difficult challenge, which is to keep preventing the spread of infection and moving toward fully resuming social and economic activity," he said.

The 39 prefectures include five -- Ibaraki, Ishikawa, Gifu, Aichi and Fukuoka -- that were classified as requiring "special caution" due to their large number of coronavirus cases.

Those that will remain under the state of emergency are Hokkaido, the Tokyo metropolitan area also encompassing Chiba, Kanagawa and Saitama, as well as Kyoto, Osaka and Hyogo.

Tokyo and Osaka are two major areas serving as the backbone of the world's third-largest economy and nearly 50 percent of the country's total population lives in the eight prefectures. 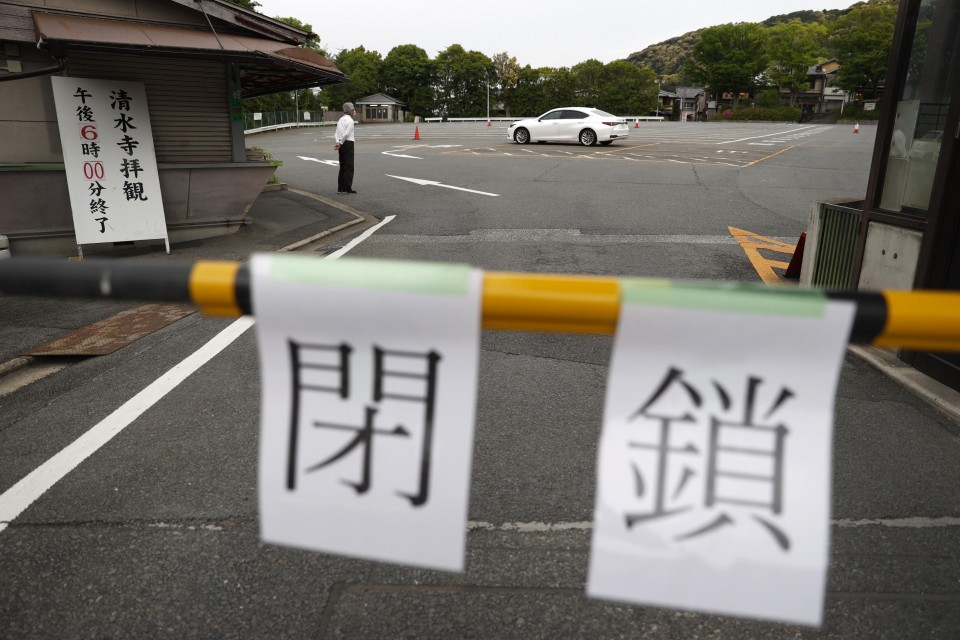 (A parking facility is closed near Kyoto's major sightseeing spot Kiyomizu Temple on May 9, 2020, under an extended nationwide state of emergency over the coronavirus pandemic.)

Abe said taking the eight prefectures off the emergency list before the end of the month is still possible, depending on the outcome of a fresh review by experts likely to be carried out on May 21.

To ease the pain felt by small and midsize companies and college students who largely rely on part-time jobs, Abe, meanwhile, instructed ministers to draw up a fresh extra budget by around May 27, the second of its kind in the current fiscal year that began in April, to boost financial support.

One of the criteria proposed by a government panel of experts for lifting the state of emergency in the remaining prefectures is whether infections have fallen below 0.5 new cases per 100,000 people in the past week.

Asked about the criteria in parliament earlier in the day, economic revitalization minister Yasutoshi Nishimura in charge of overseeing coronavirus containment steps said it corresponded to the situation until around March 20 when Japan was able to limit the spread of COVID-19 by tracking clusters.

For Tokyo, with a population of roughly 14 million, it would mean that the number of people infected with the virus would have to be fewer than 70 in one week. There were 30 new cases of infection reported in Tokyo on Thursday.

Japan has avoided an explosive rise in infections but over 16,800 cases and 726 deaths have been confirmed so far. The infection tally includes about 700 from the Diamond Princess cruise ship that was quarantined near Tokyo in February. 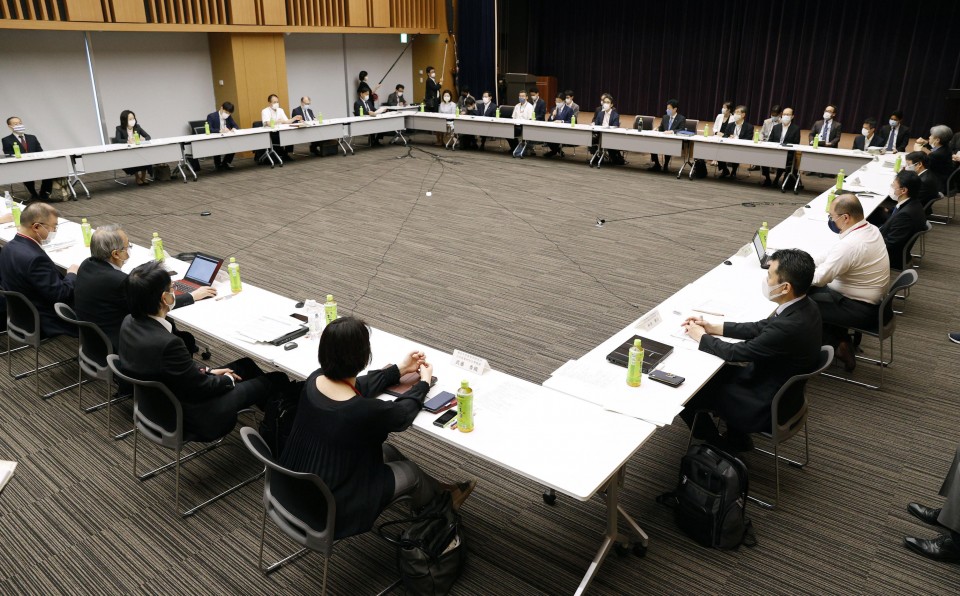 (A meeting of a government panel of experts working on measures against the new coronavirus is held in Tokyo on May 14, 2020, ahead of the planned lifting of a state of emergency for some parts of the country.)

Abe is being pressed to strike the right balance between preventing a reversal of the recent downward trend in daily reported cases and allowing economic activity to resume in stages.

Based on expert recommendations, the government has been encouraging people to adopt a new lifestyle without letting their guard down in what is now expected to be a protracted battle against the virus.

The government will continue to request that people avoid travel between areas that are still under the state of emergency and those that are not. They will also be asked to avoid confined and crowded places and close contact with people.

Restaurants, department stores, movie theatres and museums are expected to gradually open in places where the emergency is no longer in place, although they need to take preventive measures against the virus based on each industry's guidelines.

The number of daily reported cases has fallen below 100, one-seventh of the figure at its peak, but Abe warned of another outbreak if people let their guard down as it is impossible to reduce the risk of infection to zero.

Alarmed by the prospect of an explosive surge in new COVID-19 cases during the Golden Week holidays from late April to early May, the government stepped up calls for reducing person-to-person contact and avoiding travel beyond prefectural borders.

Abe initially declared a one-month state of emergency until May 6 for seven urban areas hit hard by the virus in early April. He then expanded it to the entire nation on April 16 before extending it to May 31.

He said the extension was critical for Japan to tackle the coronavirus crisis, which has dealt a heavy blow to the economy, but that the emergency could end sooner for some prefectures depending on the infection situation.

Prefectural governors have been asking people to stay at home and businesses to close temporarily, using authority to make such requests granted under the emergency declaration. The requests are voluntary and no penalties are imposed for noncompliance.

Tokyo, hit hardest by the virus among the 47 prefectures, has seen new cases fall to double-digit levels in recent days after the daily count surged to over 200 in April.

But the metropolitan government has said it will maintain its business suspension request until May 31, when the current state of emergency is slated to expire.

Osaka Gov. Hirofumi Yoshimura, meanwhile, has set out the prefecture's own criteria for easing curbs on business activity, and other governors have followed suit.

Chronology of events related to new coronavirus and Japan

The following is a chronology of major events related to the new coronavirus and Japan.

May 4 -- State of emergency extended until May 31.

May 14 -- Abe lifts state of emergency in 39 of Japan's 47 prefectures, including five classified as requiring "special caution."