A hospital in Tokyo reported nine coronavirus cases Thursday in a suspected cluster infection, only a few days after Japan completely lifted a state of emergency over the pandemic.

Meanwhile, the health ministry has dispatched a cluster response team to the southwestern city of Kitakyushu as fears grew over a possible second wave of infections in the country. The city in Fukuoka Prefecture has seen a sudden rise in cases following three weeks with no new infections.

Also Thursday, the Tokyo metropolitan government reported 15 additional cases in the capital, confirming more than 10 new infections for the third consecutive day since Tuesday, a day after Prime Minister Shinzo Abe lifted the state of emergency. The city had seen a continued decline in numbers last week.

The figure released Thursday included some of the nine cases reported by Musashino Central Hospital in Koganei in western Tokyo. 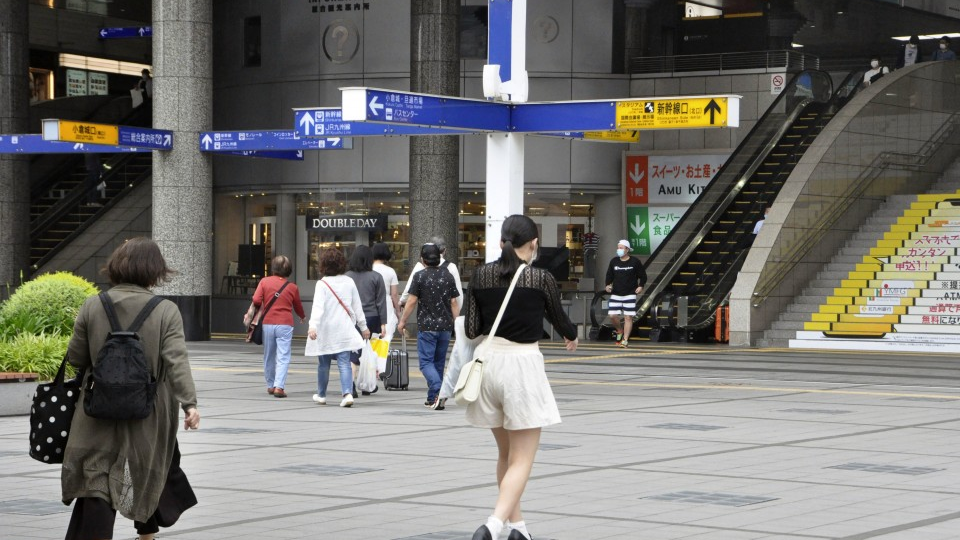 Photo taken on May 27, 2020, shows people walking near JR Kokura Station in Kitakyushu, Fukuoka Prefecture. Coronavirus infections have risen in the southwestern Japan city after a state of emergency over the virus was entirely lifted in Japan on May 25. (Kyodo)

According to the hospital, one employee from the psychiatry unit tested positive on May 21. Among those who had close contact with the employee, another four workers and five inpatients from the ward were later found to be infected.

Some other inpatients have come down with a fever, the hospital said.

The metropolitan government has requested the Health, Labor and Welfare Ministry to dispatch a cluster response team to the hospital.

The hospital said it has discontinued outpatient appointments and also stopped accepting new inpatients for the time being.

"We have been disinfecting the entire hospital as quickly as we can," it added in a statement. "We will endeavor to prevent the further spread of the virus with the utmost care."

The total number of infections in Japan has topped 17,400, including about 700 from the Diamond Princess cruise ship that was quarantined off Yokohama in February. The virus has also killed around 900 people nationwide.

Infections in Tokyo rose to nearly 5,200 on Thursday, the highest among the country's 47 prefectures.

In Kitakyushu, Fukuoka Prefecture, authorities had not reported any new cases from April 30 to last Friday. But they confirmed 43 cases in a period of six days through Thursday, bringing the total for the city to 119.

Infection routes have not been identified in most of the 22 cases reported between Saturday and Wednesday, local officials said.

Kitakyushu Mayor Kenji Kitahashi warned of a second wave of infections and asked residents to refrain from nonessential outings.

"If we leave this as it is, we will definitely be hit by a large second wave," he said at a press conference.

Some of the public facilities that had reopened in the city after the lifting of the state of emergency were closed again until around mid-June. The city said it had also decided to cancel or postpone events it organizes.