The Japanese government and ruling parties are considering drafting a second extra budget for fiscal 2020 to further help small and medium-sized businesses and people affected by the impact of the coronavirus pandemic, sources close to the matter said Thursday.

Last week, parliament enacted a 25.69 trillion yen ($240 billion) extra budget for fiscal 2020 through March next year to finance an emergency package aimed at aiding the economy and people hit hard by the virus.

The envisaged drafting of the second supplementary budget will come under an extended state of emergency declared by Prime Minister Shinzo Abe on Monday. 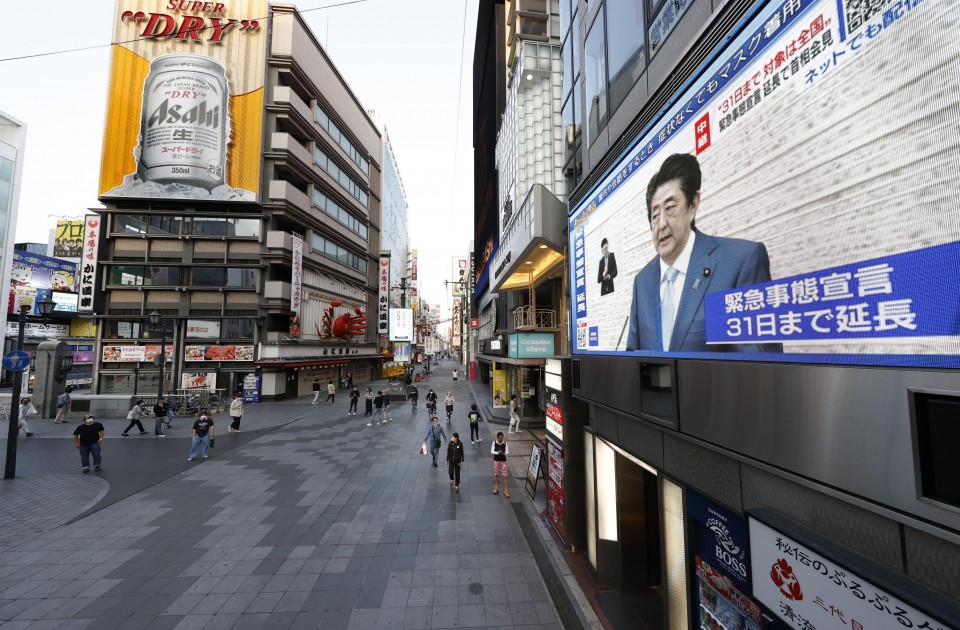 A street television in Osaka's Dotonbori district in western Japan displays on May 4, 2020, a press conference by Prime Minister Shinzo Abe the same day to explain the extension of a nationwide state of emergency over the coronavirus pandemic until the end of May.

According to the sources, the second extra budget is aimed at funding assistance for rent payments of cash-strapped businesses and people.

Other areas that the supplementary budget is likely to cover are government subsidies for unemployment and financial support for university students.

Many students are reportedly facing difficulty in paying apartment rent or tuition, with some even dropping out of school because they cannot earn money from part-time jobs amid the coronavirus outbreak. Restaurant owners and other retailers have cut part-time jobs due to social-distancing steps urged by the government.

The state of emergency, which was originally set to expire on Wednesday, will last until May 31 in an effort to ensure the number of newly reported infection cases will fall further and not strain the medical system.