Hana Kimura, the 22-year-old female professional wrestler who was among the cast of the internationally popular Netflix reality show "Terrace House," is believed to have killed herself using toxic gas at her Tokyo home where she was living alone, investigative sources said Monday.

Kimura, who had been a target of cyber-bullying, was found collapsed on her bed with a plastic bag covering her head early Saturday. A container seemingly used to generate toxic gas was discovered nearby, the sources said, adding several suicide notes were also found in her room.

Hana Kimura looks on during the press conference Bushiroad and Stardom on October 17, 2019 in Tokyo, Japan.(Getty/Kyodo)

In Kimura's apartment, a piece of paper was attached to a door that said "Toxic gas being generated" in Japanese. One of the notes was addressed to her mother, saying "Thank you for giving birth to me," according to the sources. Her death was confirmed at a hospital.

News of her death has sparked an outpouring of messages of condolence and a public outcry against cyber-bullying, including a tweet by singer Kyary Pamyu Pamyu saying, "People say we should just ignore slanderous comments, but it's difficult. An entertainer is also a human being. Please don't forget this."

On Monday, leading politicians reaffirmed the need to deal with such bullying following the death of Kimura, who was known to be a popular wrestler usually playing the role of a "heel" or villain.

The Diet affairs chief of the ruling Liberal Democratic Party, Hiroshi Moriyama, met with Jun Azumi, his counterpart in the main opposition Constitutional Democratic Party of Japan, and agreed to start a discussion on establishing a set of rules to prevent cyber-bullying.

"It is important for the legislature to play a role to make a society where such incidents do not happen," said Moriyama. "We will aim to reach a consensus on a certain direction (for the rules) by the fall," Azumi said.

Kimura was among the six cast members of "Terrace House Tokyo 2019-2020," the latest in a series that began in 2012 and is broadcast by Fuji Television. It has also garnered a cult following overseas as it is distributed by the U.S. video streaming service Netflix with English subtitles. 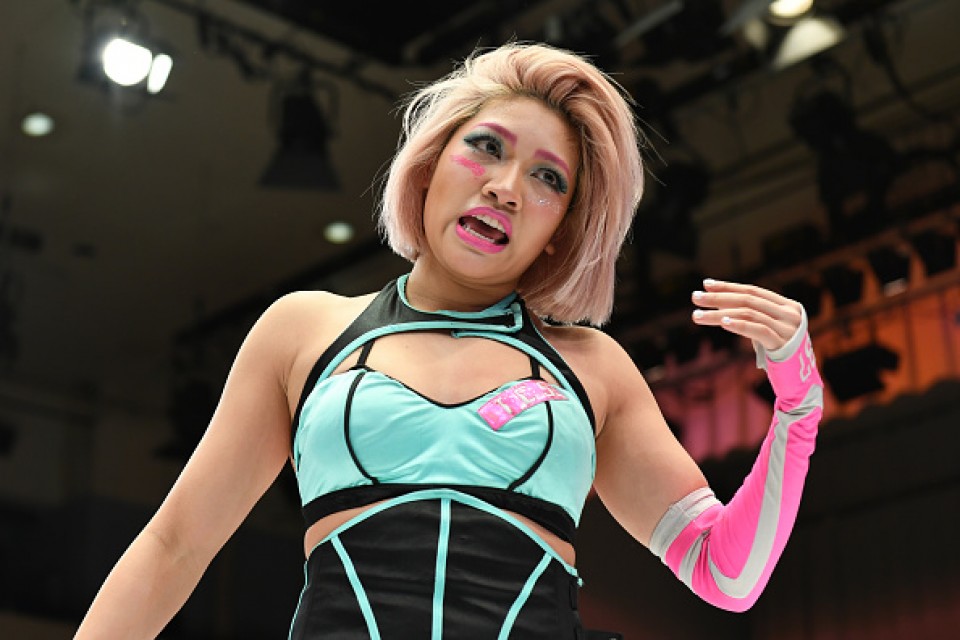 Hana Kimura reacts during the Women's Pro-Wrestling Stardom - No People Gate at Korakuen Hall on March 8, 2020 in Tokyo, Japan. The event is held behind closed doors due to coronavirus outbreak. (Getty/Kyodo)

The current series, which began in May 2019, features three women and three men sharing a house in Tokyo. The cast members are "looking for love while living under the same roof," and there is "no script" in the show, according to Netflix.

However, Kimura, who joined the show last September, had been the target of hateful messages on social media criticizing her remarks and behavior during the reality program, especially after an episode distributed in late March in which she lost her temper.

After one of the male cast members shrank one of her expensive wrestling costumes, after accidentally mixing it with his clothes and washing it in a washing machine, Kimura was seen yelling at him, "Be more considerate to others," before pulling a cap off his head in an angry outburst.

After this episode, Kimura began receiving tweets including some saying, "Everybody will be happy if you are gone quickly," and "Never appear on TV again."

On the day of her death, the Yokohama native tweeted, "Every day, I receive nearly 100 honest opinions and I cannot deny that I get hurt."

She also wrote on Twitter, "Thank you for giving birth to me, Mom. I wanted to be loved in life."

In the early hours of Saturday, shortly before her death, Kimura posted a picture of herself and a cat on Instagram with the message "I love you, please live a long and joyful life. I'm sorry."

Fuji TV had already stopped shooting of the show due to the coronavirus spread. Following Kimura's death, the Japanese broadcaster has decided to halt broadcasting an episode on Tuesday and distributing two episodes on Netflix on Tuesday and June 2.

"I would like to offer my deepest condolences (on her death)," Chief Cabinet Secretary Yoshihide Suga said at a press conference Monday.

A research group at the Ministry of Internal Affairs and Communications is discussing ways to simplify procedures to identify individuals who make defamatory posts online. "We will act appropriately based on discussions (by the group)," the top government spokesman said.