Japan's economy in the January-March period shrank an annualized real 3.4 percent from the previous quarter due to the global coronavirus pandemic, a significant contraction for the second consecutive quarter that pushes the world's third-largest economy into recession, government data showed Monday.

The data showed gross domestic product, the total value of goods and services produced in the country, corresponded to a 0.9 percent decrease on a seasonally adjusted quarterly basis.

Japan now meets the technical definition of a recession of at least two consecutive quarters of negative GDP -- following a 7.3 percent slump during October-December -- for the first time since the fourth quarter in 2015.

The economy is also highly likely to contract for a third consecutive quarter in the April-June period, probably falling at its fastest pace in the postwar years due to the impact of the virus, with some private-sector economists forecasting annualized contraction of over 20 percent in those three months.

The January-March outcome was, however, better than the average forecast of a 5.0 percent annualized real contraction made by private-sector economists polled by Kyodo News.

Yasutoshi Nishimura, minister in charge of economic and fiscal policy, told a press conference that GDP in the April-June period will "get more serious" than the January-March figure, and the economy will "slow down to a considerable extent for the time being."

He attributed the projected economic slump to the state of emergency declared over the virus that restricted economic activities across Japan in April and May.

The preliminary reading of inflation-adjusted GDP followed the 7.3 percent plunge in the final quarter of 2019, the sharpest fall in more than five years, due to a consumption tax rate hike from 8 percent to 10 percent on Oct. 1 and the after-effects of a devastating typhoon, according to the Cabinet Office.

The GDP decline in the October-December period was the steepest since a 7.5 percent slump in the April-June quarter of 2014, following the previous consumption tax increase from 5 percent to 8 percent on April 1 that year.

A Cabinet Office official said the country's economy could have picked up in the January-March period if there had been no virus impacts because the effects of the consumption tax hike and typhoon had faded.

"The current economic situation is the largest crisis since World War II," the official said.

In the reporting month, private consumption, which accounts for roughly 60 percent of the Japanese economy, dipped 0.7 percent from the previous three-month period, with spending on trips and eating out especially hard hit as people were asked to stay home to slow the spread of coronavirus, the official said. 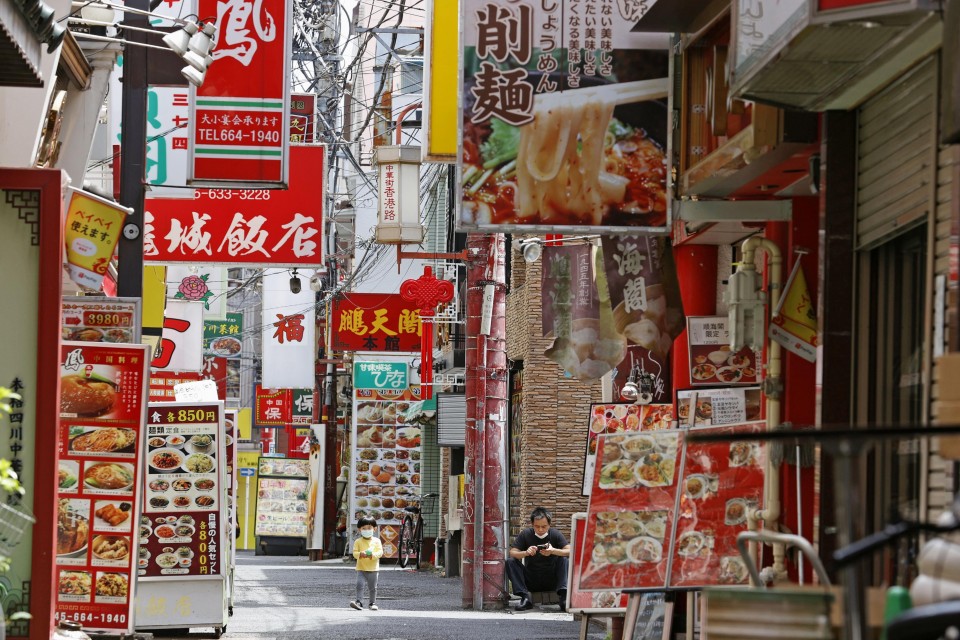 (The streets in Yokohama's Chinatown are deserted on May 15, 2020, as Kanagawa Prefecture remains under the state of emergency put in place by the central government to control the spread of the new coronavirus.)

The virus also weighed heavily on overseas demand, leading to a 6.0 percent drop in the country's exports of goods and services. Cars and auto parts posted significant declines, while spending by foreign tourists, which helps lift exports, dived due to a slump in visitor numbers.

Imports dropped 4.9 percent, with those from China heavily impacted. The decrease also apparently reflected a fall in the price of energy imports.

In nominal terms, or unadjusted for price changes, Japan's economy contracted an annualized 3.1 percent, and 0.8 percent on the quarter.

Yuichi Kodama, chief economist at Meiji Yasuda Life Insurance Co., projected that it will take at least "a year or two" for the economy to return to pre-virus levels.

He said the domestic economy, which had reached a peak around October 2018, was not in good condition even in January and February due to the continued negative impacts of U.S.-China trade frictions and the consumption tax hike.

"Basically, the economy was already stagnant and the coronavirus epidemic dealt it a major blow," Kodama said.

As for fiscal 2019 through March, the Japanese economy edged down 0.1 percent in real terms, the first contraction since fiscal 2014.

The Cabinet Office is scheduled to publish revised January-March GDP data on June 8.