As the coronavirus pandemic cripples the U.S. economy ahead of the November election, Republican President Donald Trump has turned to an apparent strategy of blaming China for the global health crisis and using the situation to attack his Democratic rival Joe Biden as being too soft on Beijing.

The development is likely to put U.S. policy toward China under intense scrutiny from countries including Japan, which is eager to press the United States to remain tough against Beijing regardless of the outcome of the Nov. 3 election as the Asia-Pacific region faces China's growing assertiveness.

Until just a few months ago, the 73-year-old president was happy with a hard-fought trade deal he signed with China, which led the world's second largest economy to agree to increase its purchases of U.S. goods and services over the next two years by at least $200 billion.

But the euphoria of his trade victory quickly dissipated as the novel coronavirus, which was first detected in China late last year, spread to the United States and forced the booming economy into a near standstill amid efforts to slow the spread of the disease. 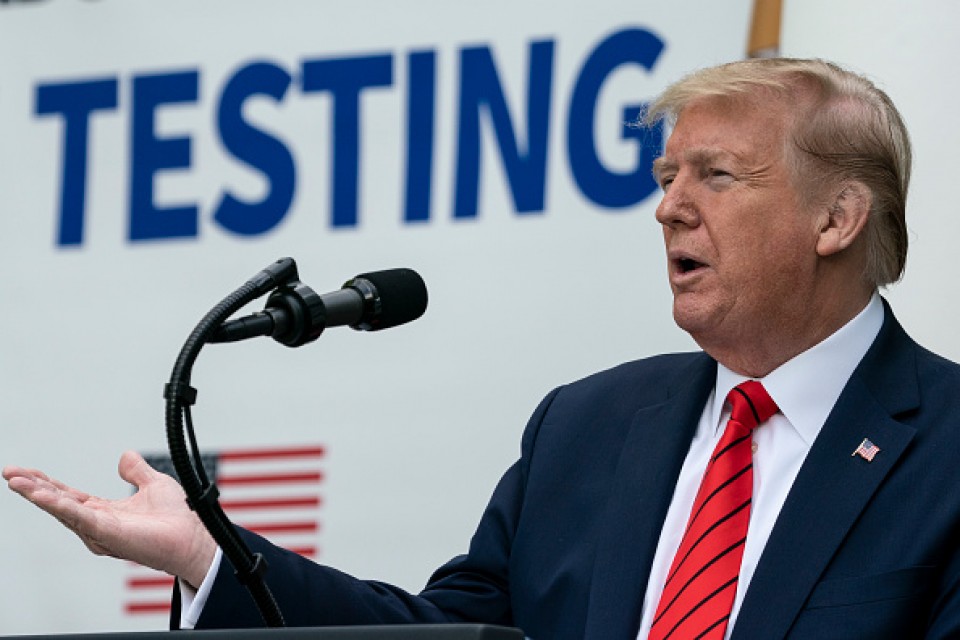 U.S. President Donald Trump speaks during a press briefing about coronavirus testing in the Rose Garden of the White House on May 11, 2020 in Washington, DC.)[Getty/Kyodo]

Trump says he is confident virus originated from China lab

Trump says he knows how North Korea leader is doing, without elaborating

Apparently to deflect criticism for initially downplaying the threat of the virus and praising China for its containment efforts, Trump has recently sharpened his rhetoric against China, saying that the contagious virus "could've been stopped at the source."

The Trump campaign and a leading pro-Trump fundraising committee have also rolled out a series of ads trying to portray the 77-year-old former Vice President Biden as dangerously conciliatory to China.

"During America's crisis, Biden protected China's feelings" one of the ads claimed, showing a clip of Biden criticizing Trump's record of "xenophobia" around the time the president banned the entry of travelers from China while the number of confirmed cases in the United States remained low.

The one-minute ad also inserted images of Biden clinking glasses with Chinese President Xi Jinping and an excerpt of his speech in 2011 in China, during which the then vice president for Barack Obama said, "It is in our self-interest that China continue to prosper."

Biden's campaign has fought back, releasing an ad saying it has been Trump, in fact, who "rolled over for the Chinese" by repeatedly praising China's efforts to contain the virus when it was spreading across the globe.

Susan Thornton, former acting assistant secretary of state for East Asian and Pacific affairs, said in an online think tank event late last month that she doubts foreign policy issues will be a decisive factor in the election, but noted that "bashing China is always good politics" in the United States.

A recent survey by Pew Research Center showed that negative views of China appear to be prevailing among the U.S. public, over concerns ranging from job losses to China to Chinese human rights policies.

According to the telephone survey conducted from March 3 to 29 among 1,000 adults, roughly two-thirds said they have an unfavorable view of China, the most negative rating for the country since the center started the poll in 2005.

The figure has also risen by nearly 20 percentage points since the start of the Trump administration in 2017, which has pressured China by slapping punitive tariffs on the country in a bid to push negotiations over the chronic U.S. trade deficit and alleged intellectual property theft from U.S. firms.

While Republicans have traditionally held more negative views than Democrats toward China, the country's unfavorable ratings have climbed among both parties, according to the survey.

The intensifying battle over China has drawn attention in Japan, a close U.S. ally, with a government source saying officials are "carefully analyzing" how U.S. policy toward Beijing is shaping up during the election campaigning.

In April, a Japanese government official identified only by the initials Y.A. contributed an online article to the U.S. magazine The American Interest, saying that Japan prefers in almost every way the Trump administration's confrontational approach to China over Obama's engagement and accommodation.

"While President Obama was talking about possible cooperation with China on global issues in a bid to make a responsible stakeholder out of a rival, Beijing was busy sending military ships" to the Japan-controlled, China-claimed Senkaku Islands in the East China Sea and creating artificial islands in the South China Sea, the article said.

The Trump administration, meanwhile, has sent a "strong warning signal to China," although it has also raised doubts among Asian countries over the U.S. commitment to the region because it has used "economic leverage" against its allies as well as China.

"So, do we want, if possible, to go back to the world before Trump? For many decision-makers in Tokyo, the answer is probably no, because having a poorly implemented but fundamentally correct strategy is better than having a well-implemented but ambiguous strategy," the article said.

Toshihiro Nakayama, a politics professor at Japan's Keio University, said the article is unlikely to have been an official Japanese government "operation" to deliver its view to Washington, but it signals the "worries" lingering inside Tokyo that Biden may return to the Obama-era approach if he is elected president.

So far, Biden does not seem to have any reason to backpedal. He has made clear in an essay for the U.S. magazine Foreign Affairs earlier this year that China represents a "challenge" that should be confronted by the United States and its allies.

Nakayama, who has expertise in U.S. politics and Japan-U.S. relations, said there is "nothing to lose" through China-bashing amid the current bipartisan consensus that the United States needs to be tough against China.

But he warned that too much focus on hitting China may leave the details obscure as to how Washington plans to influence Beijing's behavior to address long-standing concerns ranging from politics to economic issues.

Thornton said both Trump and Biden seem to be indicating that U.S. actions on the world stage will seek to "confront China every turn and make sure that we (the United States) can compete with China."

But she said such a national purpose does not sound "very compelling" to her, especially when the coronavirus pandemic has demonstrated that "all of the big challenges facing our country in the future are not going to come from a single nation-state."

"It's going to come from these other kind of formidable transnational challenges," she said at the event hosted by New America on April 21, arguing, "We're going to need to band together with other countries -- maybe China, maybe not China -- but at least other countries to confront these challenges."

"I hope that they (Trump and Biden) would turn to that, but so far it hasn't happened," she said.