With no end in sight to the coronavirus pandemic, some single parents in Japan have taken to meeting online to counter feelings of isolation and share concerns with others in similar situations.

At an online gathering held on a recent Sunday night by a single-parents club known as "S Kuru," five participants from eastern and western Japan talked about the challenges they have faced. 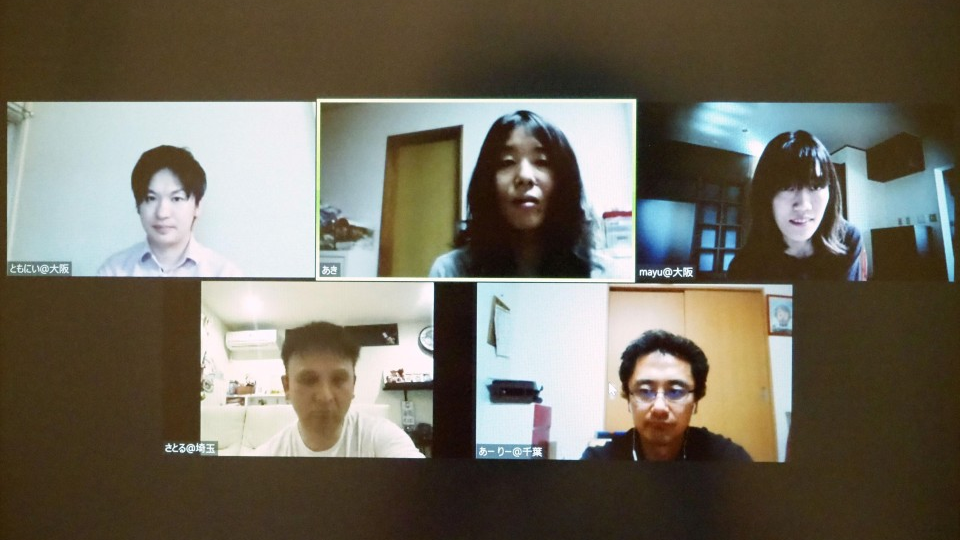 (A video screen shows single fathers and single mothers holding an online session on May 10, 2020, to discuss various problems associated with the coronavirus pandemic. A group called "skuru" has sponsored the event three times a week since April using a video conference system.)

"It's tough not having opportunities to talk with other adults during these stay-at-home measures," one said, while another pointed to how the growing stress parents and children feel can make them testy with each other.

With the faces of children occasionally popping up on the screen, the atmosphere is friendly and creates a sense of closeness between participants.

Members of S Kuru connect through the messaging app Line but the group has also hosted in-person events in the past.

The club, whose name's S stands for single, supporter and sympathizer, and Kuru comes from the word "crew," began holding online gatherings via Zoom Video Communication Inc.'s online conferencing platform three times a week from April as the virus spread to more areas in Japan.

Participants report on the latest happenings in their lives while also sharing information on government and private services for single parents. Over 100 people took part in the daily events held during the Golden Week holidays through May 6.

"With everyone getting increasingly fatigued from coronavirus (measures), they need to vent," said Tomohiro Imai, 32, representative director of Hitorioya Shien Kyokai, the Osaka-based single parent association organizing the club and the events.

Japan was placed under a nationwide state of emergency in mid-April. Although restrictions were eased in most prefectures last week, Tokyo, Osaka and their surrounding areas, as well as Hokkaido remain under the emergency, with people asked to stay home as much as possible.

A 44-year-old single mother living in Tokyo with her two sons aged 18 and 6 started joining the events in May. She described the feeling of having to do everything herself -- working from home at the same time as managing household chores and helping her youngest son, who enrolled in elementary school this spring, study while schools remain closed.

"Everything was half-hearted and I just kept blaming myself. Before I realized it, I was drinking more," she said.

But interacting with parents in similar situations helped her feel less alone and reduced the heaviness in her heart, she said.

Participants of the online gatherings all shared concern about what would happen to their children if they contracted the virus and had to self-isolate.

With many not having relatives close by to rely on, sobering comments such as "I feel acutely aware that tomorrow is not guaranteed" and "More than anything else, I want a sense of security," filled the virtual space.

Only some local governments have outlined policies indicating that children would be looked after at child consultation centers, hotels or other facilities should their guardians become infected with the coronavirus.

"Governments should secure a place for children and take other measures to dispel concerns single parents have," Imai said.