Tokyo was slowly getting into motion Tuesday with some people returning to their office and others heading to the park a day after Japan lifted a state of emergency over the novel coronavirus pandemic.

"There seems to be slightly more people," said a male worker in his 30s who was among the people headed for their office in front of JR Tokyo Station.

"It's not like we can immediately return to our previous lives. I pray that there won't be a second wave (of infections) due to everyone letting their guard down," he said.

A woman in her 40s, who had been commuting throughout the state of emergency period, which began April 7, said she is "happy that our daily lives are returning to normal," but expressed worries that some people were not wearing a mask.

The metropolitan government has decided to ease its business suspension request in three steps, and the capital is now in the first stage. 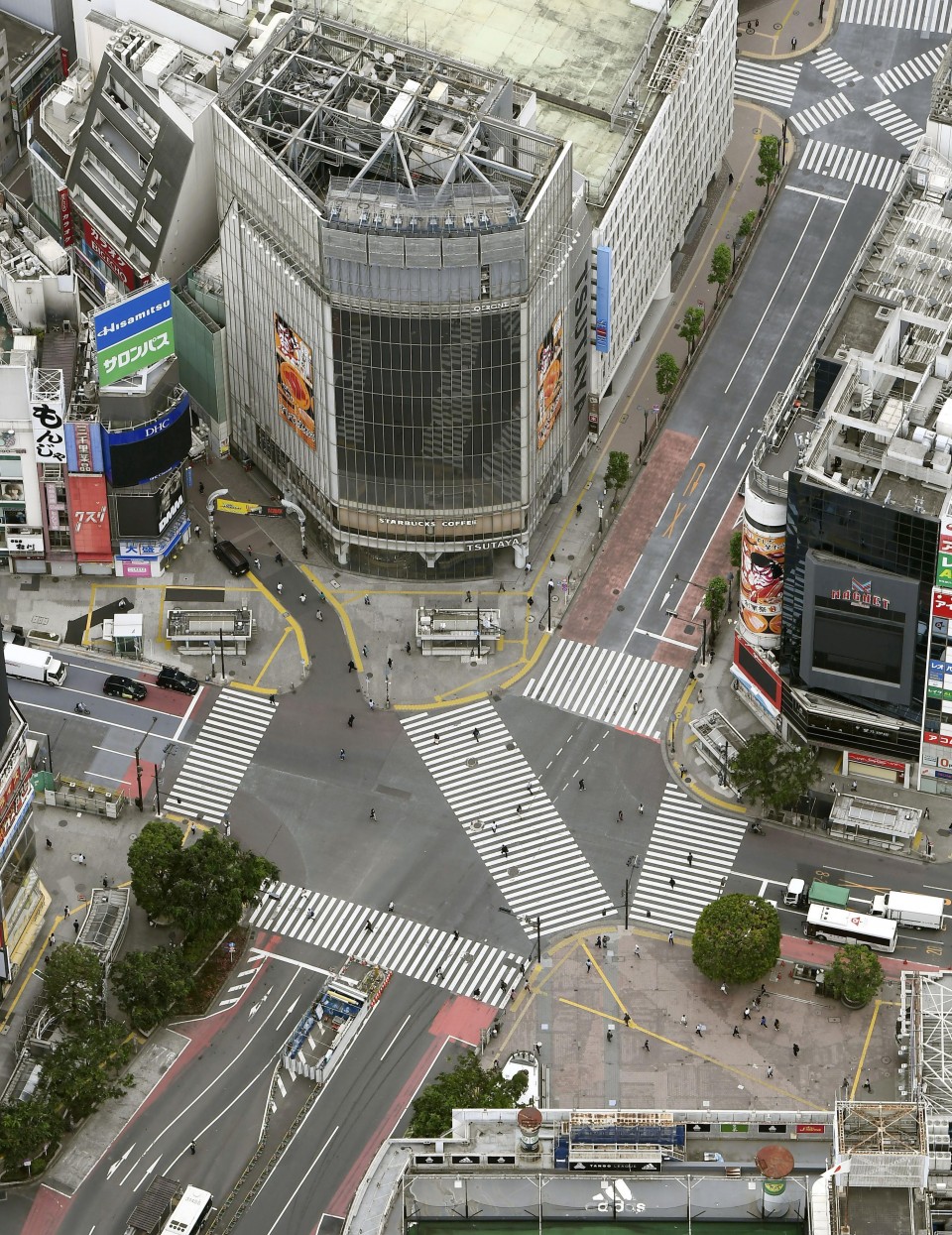 Photo taken from a Kyodo News helicopter shows a scramble crossing in Tokyo's Shibuya area on the morning of May 26, 2020, a day after a coronavirus state of emergency was lifted in Tokyo and four other prefectures. (Kyodo)

Museums, libraries and indoor sports facilities are allowed to reopen, while restaurants, which had been asked to stop providing alcohol by 7 p.m. and close by 8 p.m., can now stay open and offer alcohol until 10 p.m.

Eateries in the Kanda district, where office workers congregate after work, were ready to do business, but clients were few.

"I want office workers to return quickly to our area," said Toshie Kawaguchi, owner of Karatsu, which had been closed for a month and a half. Having lost his income, he had to put off paying rent on the store.

"It's been a long time since we went out for drinks. We can't linger here too long, but we want to enjoy ourselves," said a female customer in her 40s who was with her friend.

Stores opened throughout the city, including those in the Asakusa district, but the usually popular shopping area was quiet.

"Foreign tourists are our main clients, so I think that this tough situation will continue for a while," said Setsuko Makino, a 73-year-old souvenir shop owner.

"I had been waiting for the reopening. It's fun to be at a department store after a while," said 77-year-old Katsuyo Miura, who traveled in from Sagamihara, Kanagawa Prefecture.

Playground equipment at municipal parks, which had been off-limits, was also made available again.

Children dashed to the swings, jungle gyms and other equipment as soon as workers removed the safety tape from them at Kinuta Park in Setagaya Ward.

"I am really glad because I can now let my child play at a park without constraint," said Megumi Tsukahara, 31, who lives nearby with her 2-year-old son Soma.

In Chiba Prefecture, where restrictions were similarly lifted, a theater was preparing to start welcoming visitors from Wednesday, with its staff sanitizing seats and ticket machines.

"I hope there won't be a second wave (of infections)," said the theater's manager Hiroshi Horikawa, 51.

Hokkaido Prefecture was one of the last five prefectures to have the state of emergency lifted.

Hiroshi Momono, a 70-year-old worker for a nonprofit organization who was on a train to his office in Sapporo, said the number of people on the train had not changed from four days ago.

"Maybe the practice of getting on trains at different times is taking root," he said.

Kenichi Katakura, the 67-year-old manager of a hot spring resort in Asahikawa, expressed caution on its opening day.

"While I am relieved, the risk for infection increases when people congregate. I can't be joyful with abandon," he said of the hot spring, which attracts on average 20,000 people a year.

Japan gives up approving Avigan in May for coronavirus treatment