Osaka Prefecture said Thursday it will remove part of its business suspension requests from Saturday, even as it remains under the state of emergency put in place by the central government.

Department stores and movie theaters will be allowed to reopen as long as they follow the authorities' infection prevention measures.

Museums, universities and cram schools will be able to reopen, while internet cafes and pachinko parlors will be permitted to resume business as long as their floor space does not exceed 1,000 square meters.

Restaurant opening hours will be extended by two hours to serve customers from 5 a.m. to 10 p.m.

Osaka judged it has cleared its self-imposed criteria set in early May to curb the spread of the new coronavirus for reopening some economic activities. 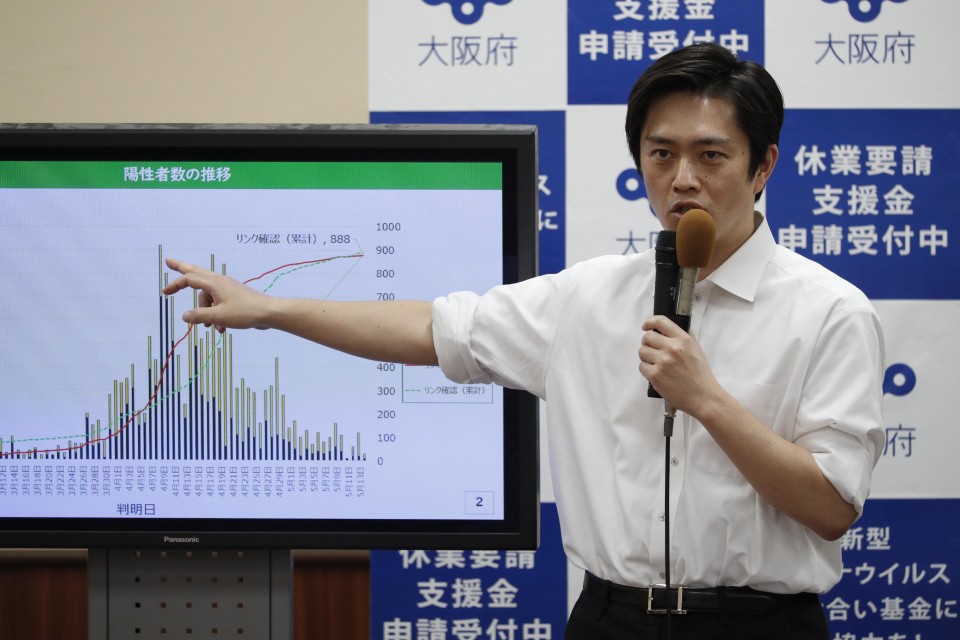 (Osaka Gov. Hirofumi Yoshimura speaks at a news conference in Osaka on May 14, 2020, after the central government lifted a coronavirus pandemic state of emergency in 39 of Japan's 47 prefectures.)

The declaration by Gov. Hirofumi Yoshimura came a few hours after Prime Minister Shinzo Abe lifted the nation's state of emergency for 39 prefectures, excluding Osaka, Tokyo and six other prefectures.

The partial reopening of the economy will not apply to businesses such as nightclubs and live music venues, as well as similar venues such as karaoke bars, Osaka said. Gyms and other sports facilities will also not be covered by the move.

The prefectural government will also continue to request that residents refrain from nonessential outings. Businesses will still be asked to refrain from holding events regardless of size or location.

The decision was based on the "Osaka model" created by the prefecture on May 5 that set three numerical targets which if met for seven consecutive days, would ease restrictions on its local economy in stages.

Osaka's targets were fewer than 10 new patients with unclear infection routes, a positive infection rate under 7 percent from PCR testing, and less than 60 percent of the prefecture's hospital beds being used by seriously ill COVID-19 patients.

Osaka said it will coordinate its planned removal of business restrictions with neighboring Kyoto and Hyogo, the two western Japan prefectures which also have their own measures and remain under the state of emergency.

The central government plans to re-examine the need to maintain the emergency on May 21 for the eight prefectures that include Hokkaido, Tokyo and its metropolitan area also encompassing Chiba, Kanagawa and Saitama.