While China's tensions with the United States and Australia have been sharply intensifying over its handling of the new coronavirus outbreak, the Asian power has been apparently aiming to bolster ties with its neighbors -- Japan and South Korea.

As relations with Washington are expected to worsen at least until the U.S. presidential election later this year, Beijing has been making friendly overtures toward Tokyo and Seoul with an eye on economic revival after the pandemic passes, diplomatic sources said.

Many foreign affairs experts are carefully watching what kind of foreign policy China will adopt at the postponed annual session of the country's parliament, the National People's Congress, scheduled to be convened next Friday.

Recently, the administration of U.S. President Donald Trump has accused Beijing of failing to curb the spread of the virus, first detected late last year in the central Chinese city of Wuhan, and of not sharing relevant information in a timely manner.

Trump has said the United States could even "cut off the whole relationship" with China, while threatening to impose tariffs as punishment for Beijing's alleged mishandling of the epidemic in the critical early months.

Globally, more than 4.5 million cases of infection with the new virus have been confirmed, with the number of deaths exceeding 300,000, according to a tally by Johns Hopkins University.

Canberra has, meanwhile, asked for an independent investigation into the origins of the new coronavirus, prompting China to suspend beef imports from four major Australian meat processors, citing labelling and certification issues, in an apparent retaliatory move.

"We will need an independent inquiry" to "learn the lessons," Australian Prime Minister Scott Morrison told reporters on April 23. Australia is one of China's largest trading partners.

"Now people are aware of my view about having the sort of authorities that would enable independent public health inspectors to be able to go into areas where a virus of potential pandemic implications can be understood quickly," Morrison added.

The Chinese Embassy in Canberra released a statement on April 28 saying Ambassador Cheng Jingye has "called on Australia to put aside ideological bias, stop political games and do more thing to promote the bilateral relations."

The Chinese Commerce Ministry has indicated that, following an 18-month investigation, it will impose anti-dumping tariffs on Australian barley. The punitive step would deal a stunning blow to Australia's agricultural sector.

"If an independent inquiry is conducted, China may be blamed for the virus outbreak. China is worried that the proposal will be raised at the WHO's general assembly that will begin Monday," a diplomatic source said, referring to the World Health Organization.

China is also at odds with the United States, Europe, New Zealand and others over Taiwan's participation in the WHO as an observer. Beijing has long considered the self-governing, democratic island a renegade province awaiting reunification. 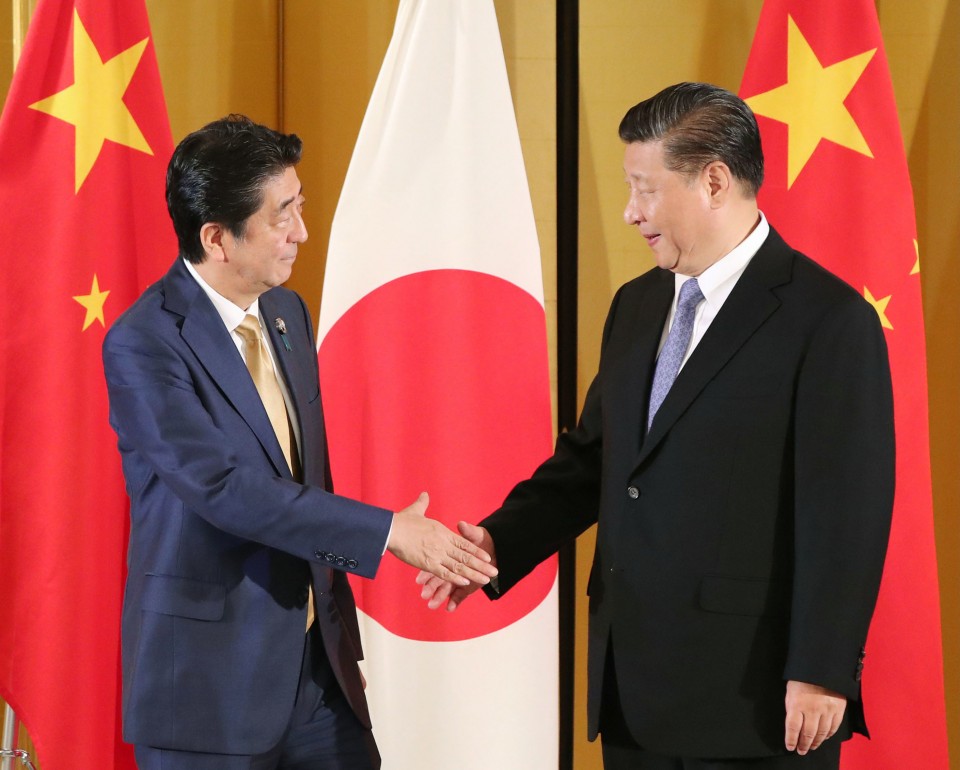 The WHO has been criticized by the United States and some of its allies for having turned a blind eye when China allegedly withheld information that could have helped limit the epidemic. The global body's director general, Tedros Ghebreyesus, has strenuously rejected such accusations.

Trump, who is believed to be attacking Beijing to gain public support ahead of the presidential election, has been one of the strongest critics of the WHO, calling it "a puppet for China." In recent weeks he has frozen funding to the U.N. agency.

Prime Minister Shinzo Abe has also said Japan, along with the European Union, will seek an investigation into the WHO's initial response to the coronavirus spread at the two-day annual meeting of its decision-making body in a virtual setting.

But Tokyo has taken a softer stand against China than other nations, as the governments of the world's second- and third-biggest economies have been trying to improve their ties by effectively shelving bilateral rows.

Japanese Ambassador to Canada Yasuhisa Kawamura was quoted by China's Embassy in the country as telling Ambassador Cong Peiwu on May 8 that Tokyo is opposed to politicizing the pandemic and will work in tandem with Beijing to prevent infections.

The group of uninhabited islets, called Diaoyu in China, are controlled by Tokyo but claimed by Beijing. Relations between the two countries have been often frayed by the territorial dispute, but strains did not escalate this time.

Amid growing uncertainties over ties with the United States, "China is really eager to strengthen cooperation with Japan to revive the economy, which was hit hard by the virus outbreak," another diplomatic source said.

"For Japan, China is an essential trading partner. Japan also thinks the economy cannot rebound without cooperation with China. They are unlikely to be willing to ignite a controversy," he added.

In March, the Chinese Foreign Ministry abruptly announced a temporary ban on foreigners entering the country. The measure has applied even to those who hold a valid visa or residence permit.

Beijing, however, has sounded out Tokyo on partially easing the restriction so that businesspeople who test negative for the new virus can travel between the countries, Japanese government sources said.

China has already started to allow the entry of South Korean businesspeople meeting certain conditions in an attempt to ensure a smooth supply chain, which has been seriously disrupted in the wake of the virus spread.

President Xi Jinping was quoted by the Chinese Foreign Ministry as telling South Korean President Moon Jae In during a phone conversation on Wednesday that Beijing and Seoul "were the quickest to set up a joint response mechanism, and have maintained a track record of zero cross-border infections."

A source familiar with the situation in East Asia said, "For the time being, China's diplomacy may be determined by how much some countries can contribute to the economy. I'll be paying attention to what Foreign Minister Wang Yi says at the National People's Congress."