The suspect in a deadly arson attack last July on a Kyoto Animation Co. studio has said he thought there were only "about two" victims in the fire, which killed 36 people, investigative sources said Thursday.

Shinji Aoba, 42, was arrested Wednesday after being judged to have recovered sufficiently from life-threatening burns. He was initially unaware of the death toll and was informed by police following his arrest on suspicion of murder and arson among other charges.

He allegedly set fire to the studio in Kyoto's Fushimi Ward on July 18, also injuring 33 others. The number of victims makes it one of Japan's biggest-ever murder cases. 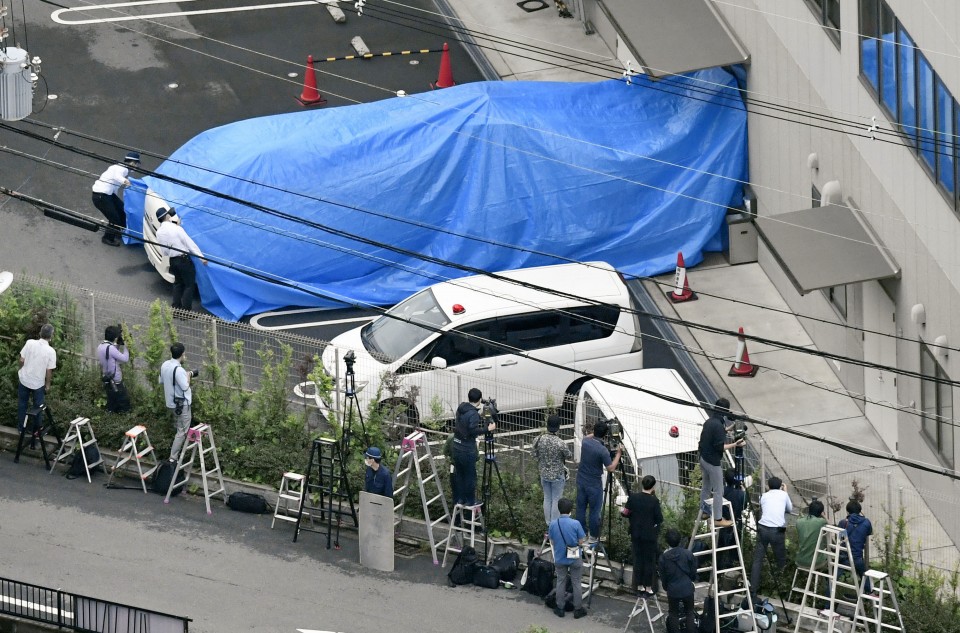 Photo taken May 27, 2020, from a Kyodo News helicopter shows a blue sheet covering a vehicle carrying Shinji Aoba, the 42-year-old suspect in a deadly arson attack in July 2019 on a Kyoto Animation Co. studio. His arrest came 10 months after he allegedly set the studio on fire, killing 36 people, and was hospitalized with life-threatening burns.

Aoba has admitted to attacking the studio, known internationally for producing a number of popular animation works, according to the police sources, who have also quoted him as saying, "I thought I could kill many people by using gasoline."

He has also said he initially planned to use kitchen knives to attack the studio, said the sources.

Last July, immediately after being detained near the scene, Aoba told police he carried out the attack because the company "stole a novel" from him, a claim it has denied.

Aoba was transferred on Wednesday from a hospital to a police station and then to the Osaka Detention House, where he has been questioned. A lawyer working for him said Thursday an appeal has been filed against a court decision to allow police to detain him.

The police have said Aoba's condition has become stable enough for him to be detained and that they have prepared medical facilities at the detention house.