More than 1,000 people protested in Hong Kong on Wednesday against a bill that, if passed by the legislature, would outlaw abuse of China's national anthem, with police making hundreds of arrests.

Police fired rounds of pepper balls to disperse demonstrators in the busy Central business district, while in the shopping area of Causeway Bay, also on Hong Kong Island, about 100 people were detained.

People also gathered in the Mong Kok district in Kowloon across Victoria Harbor, blocking roads with debris and obstructing traffic.

"Liberate Hong Kong! Revolution of our time!" some protesters chanted. "Hong Kong independence, the only way out!" 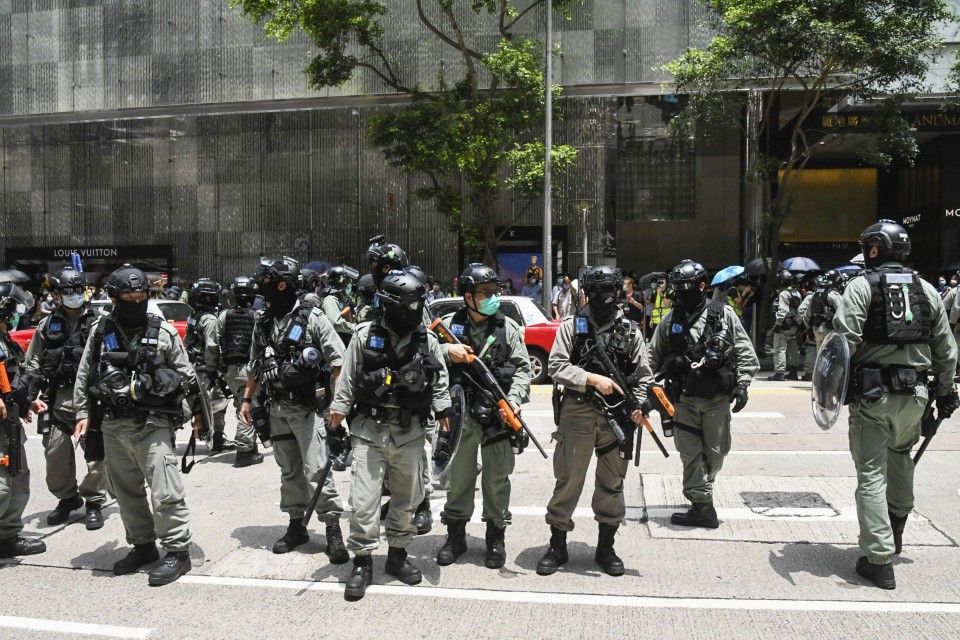 (Riot police expel pro-democracy protesters in central Hong Kong on May 27, 2020, as the legislature resumes debate over a controversial national anthem law)

Police said more than 300 people were arrested in different parts of Hong Kong for offenses including unlawful assembly, illegal possession of petrol bombs, helmets and face masks, or for slow driving with the intent to jam rush hour traffic.

Reports of arson and obstruction of subway tracks were also received.

Protesters had been urged online to surround the Legislative Council at the government complex in Admiralty, on Hong Kong Island, in a bid to disrupt the third reading of the National Anthem Bill, scheduled to be passed next week.

A line of water-filled barriers circled the complex and riot police manned its entrances. Only civil servants and people working in the nearby buildings were allowed access, while others were barred and some had their personal belongings searched.

The bill passed its second reading in January last year. But the legislative process was suspended after the more controversial China extradition bill was tabled for discussion, followed by a filibustering effort by pro-democracy camp lawmakers to continue stalling the process.

The bill lists out penalties for misusing the score or the lyrics of the anthem "March of the Volunteers" and for insulting behavior such as publicly and intentionally playing and singing the anthem in a distorted or disrespectful way.

"The national anthem is a symbol representing the country, which is of vital importance," Chief Secretary Matthew Cheung said ahead of the bill's debate.

"We as Hong Kong people have a moral duty to respect the national anthem. As long as you do not openly insult or defame (the anthem), you will not breach the law."