Former Emperor Akihito visited a biology research institute inside the Imperial Palace on Thursday in his first return to the palace since moving to a temporary residence in Tokyo about two months ago, the Imperial Household Agency said.

The former emperor has long conducted research at the institute on the goby fish and published academic papers. 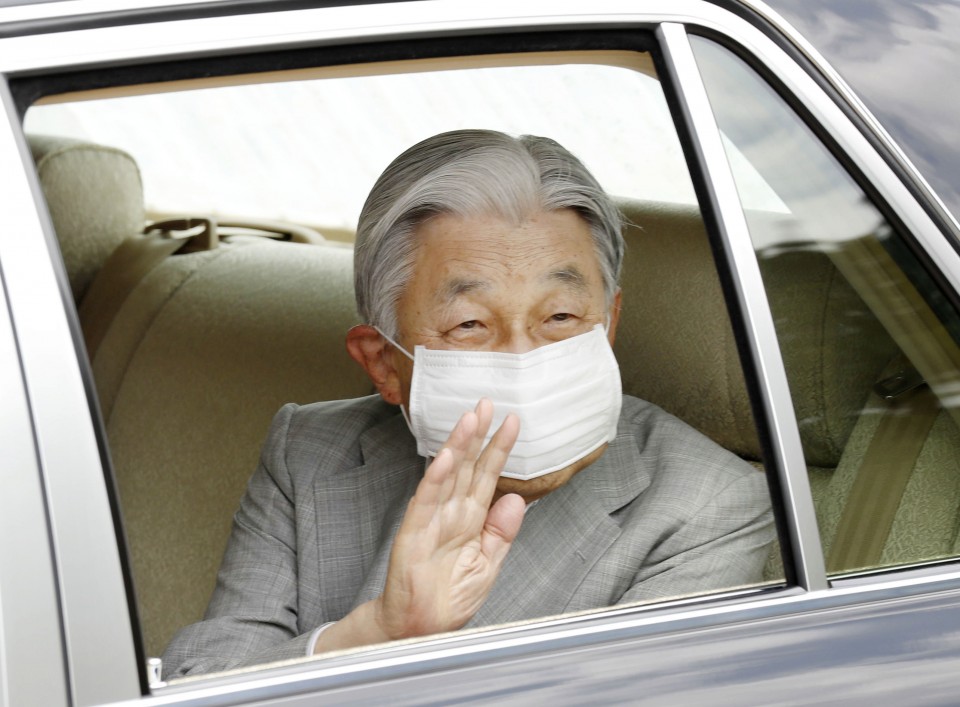 Former Japanese Emperor Akihito leaves after visiting a biology research center at the Imperial Palace in Tokyo on May 28, 2020. (Kyodo)

The visit was also the first outing by the 86-year-old since he and former Empress Michiko, 85, left their home of 26 years to move into the Takanawa Imperial Residence in Tokyo's Minato Ward.

The former emperor, who abdicated on April 30 last year as the first Japanese monarch to step down in around 200 years, had been refraining from going out due to the coronavirus pandemic.

The move in March was part of a process of swapping residences with the couple's son Emperor Naruhito and his family, who currently reside in the Akasaka Imperial Residence.

Wearing a face mask, the former emperor left his residence at around 10 a.m. and arrived at a gate of the Imperial Palace in a car about 10 minutes later. He left the palace at around 11:40 a.m., waving to the roadside crowd.

While living in the palace, he frequented the research institute to continue his research on the goby fish.

His visit on Thursday, which came after the government lifted the state of emergency in Tokyo on Monday, was considered safe as the environment there did not expose him to the "three C's" -- closed spaces, crowded places, and close-contact settings.

The former emperor and former empress are scheduled to live in the Takanawa residence for up to a year and half, before moving into the Akasaka Imperial Residence.

The elderly couple's old residence at the Imperial Palace will be renovated to accommodate the new emperor and his family.