U.S. President Donald Trump on Thursday signed an order seeking to regulate what he sees as selective online censorship by social media firms, after his tweets received a fact-check alert by Twitter Inc. for the first time.

Social media platforms like Twitter and Facebook Inc. cannot be held responsible for the content of their users' posts due to a 1996 law, but Trump's order calls for regulations aimed at stripping the companies' "liability shield" when they engage in censorship or political speech. 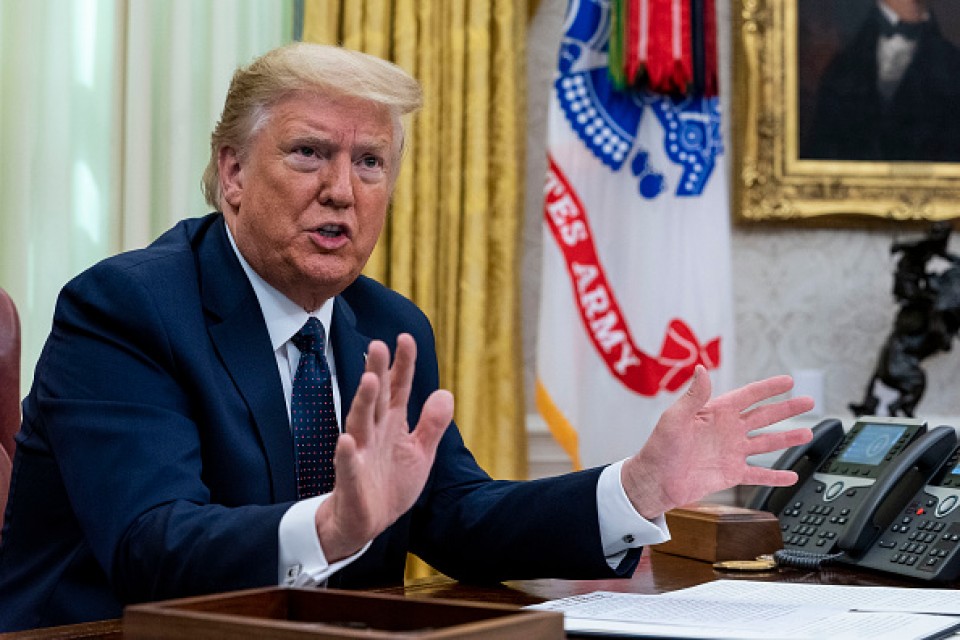 U.S. President Donald Trump speaks in the Oval Office before signing an executive order related to regulating social media on May 28, 2020 in Washington, DC. (Pool/Getty/Kyodo)

"I'm signing an executive order to protect and uphold the free speech and rights of the American people," Trump said, while suggesting that social media giants like Twitter should no longer be granted immunity because they are not a "neutral" platform.

He said the government will start working on legislation to enforce the order, which may seek to "remove or totally change" Section 230 of the Communications Decency Act, which provides the immunity.

The provision was originally adopted to protect the growth of American communications companies online at a time when the internet was relatively new, and also to ensure that online platforms would not be discouraged from taking down harmful content, such as child pornography, by ensuring they will not be liable for doing so.

Twitter criticized Trump's move, saying that Section 230 protects "American innovation and freedom of expression" and "attempts to unilaterally erode it threaten the future of online speech and internet freedoms."

Social media platforms will be considered as "publishers" if they start censoring content and therefore will not be entitled to the same protections under the law, he said.

The tweets by Trump that triggered the current furor claimed that mail-in ballots, which are drawing attention due to the possibility they will be more widely used during the coronavirus pandemic, will not "be anything less than substantially fraudulent" and would lead to a "rigged" presidential election in November.

A spokesperson for Twitter said that it tagged two of Trump's tweets with a fact-check alert on Tuesday because they contained "potentially misleading information about voting processes." The new warning label was introduced earlier this month.

The president on Thursday blasted Twitter for adding the alert, calling it an "egregious" example of Twitter trying to silence views it disagrees with.

But Trump said he has no intention to delete his Twitter account, where he has more than 80 million followers, acknowledging that it is still an effective tool to refute "fake news" and instantly get his message out.

The 73-year-old president uses the social platform daily to attack his opponents, announce his policy decisions and conduct diplomacy. He has come under fire, however, for promoting conspiracy theories, the most recent in which he falsely accused a television host of being involved in a murder.

"I don't think that Facebook or internet platforms in general should be arbiters of truth," he told business news network CNBC in an interview aired Thursday.

"Political speech is one of the most sensitive parts in a democracy, and people should be able to see what politicians say and there's a ton of scrutiny already to political speeches," he said.

But he admitted there are still "lines" and that actions will be taken against content deemed harmful.