Tourism and eatery businesses across Japan have racked their brains to come up with unconventional campaigns to retain customers in their bid to overcome the hardships brought on by the coronavirus pandemic.

In March, the Grandia Housen, a traditional-style "ryokan" inn in Awara, a hot spring resort in Fukui Prefecture, began providing an unlimited monthly stay plan, including breakfast, for around 50,000 yen ($470). The arrangement enables customers to check-in at the ryokan on any given evening except for Saturdays and the day before a holiday. 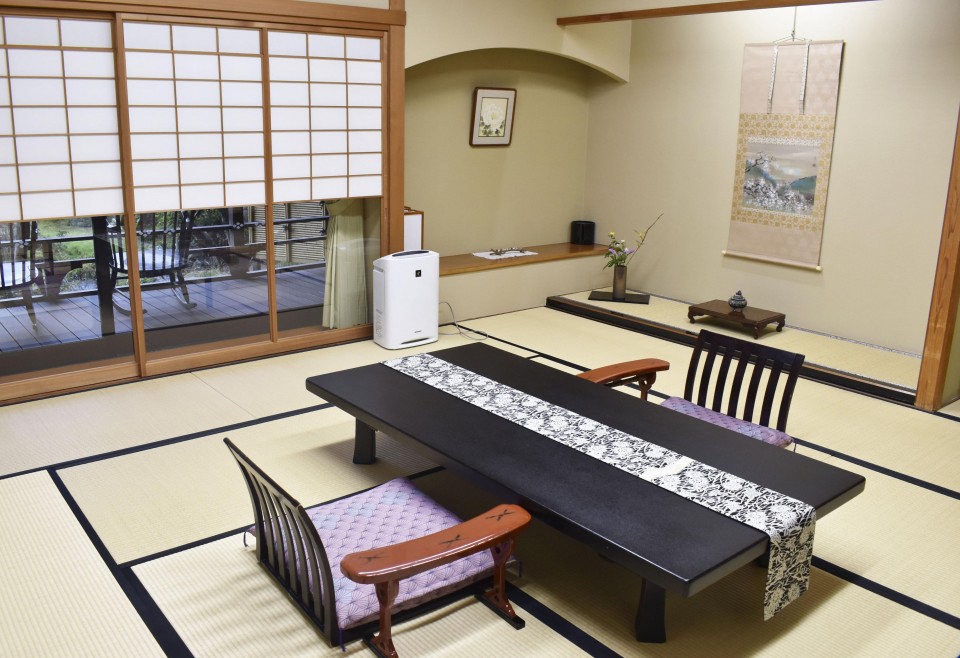 (A room at the Grandia Housen.)

Limited to 10 groups, the plan sold out in two days. It proved popular among many local families, with some of them saying they felt "special and excited" to stay at a ryokan, according to the inn in central Japan.

The ryokan operator then ran a second campaign, which grants customers an unlimited monthly stay in rooms with a private outdoor bath for between 120,000 yen and 180,000 yen, depending on room type.

Only those who follow social media accounts of the inn's executive managing director Takasumi Yamaguchi can apply for the specials.

"Even as people are asked to refrain from going out (due to the virus outbreak), I want families and friends to strengthen their ties by staying at our ryokan, which can offer an out-of-the-ordinary experience," Yamaguchi said.

The restaurant "Shrimps" in Fuji in central Japan's Shizuoka Prefecture has also come up with unique services to retain customers.

Every Monday evening, just one family is allowed to reserve the entire eatery for themselves. The plan allows families to dine without having to worry about the risk of being infected with the virus in a crowded area, according to the restaurant.

"The service can be used for various purposes, such as a dinner to thank grandparents for taking care of their grandchildren during school closures," said manager Makiko Ono, referring to the shutdown of most schools in Japan since early March to prevent the spread of the virus.

The eatery will continue taking reservations for the service in April.

The Shizuoka city of Izu has started selling 3,000 yen meal vouchers for a discounted price of 2,000 yen to its residents for use at local restaurants.

"It'll be challenging to attract tourists for a while," said an official of the Izu city government's tourism and commerce division. "We would like to get the local economy moving just with gift vouchers for residents."

R-pro Co. in Nagoya, which provides community development services in the central Japan prefecture of Aichi, has been supporting local cafes by selling coffee tickets at its crowdfunding site. Aichi cafes are famous for offering generous breakfast sets that often come with a cup of coffee, toast, salad and boiled egg.

Customers who avoid going to the cafes, for the time being, can use the tickets after the virus outbreak subsides in the region, while cash-strapped coffee shop managers can secure sales in advance through the measure, according to the company.

"We want ticket holders to wait until (the virus epidemic) gets under control and enjoy delicious coffee," said Naoto Okamoto, a 42-year-old representative of R-pro.