Governors seek state compensation for business closures due to coronavirus

Japanese governors urged the state on Wednesday to compensate businesses so they can comply with requests to halt operations and cancel events in order to curb the spread of the new coronavirus, but the central government rejected the call.

Prime Minister Shinzo Abe on Tuesday declared a state of emergency in Tokyo and six prefectures including Osaka. Under the declaration effective through May 6, the governors can request businesses to halt operations.

The governors held an online meeting and compiled proposals for state compensation for businesses.

But Chief Cabinet Secretary Yoshihide Suga, the top spokesman for the central government, said at a press conference it does not plan to introduce such a measure.

Yasutoshi Nishimura, economic and fiscal policy minister who oversees special measures to respond to the epidemic, held a videoconference call with the governors later in the day and asked them to refrain from asking businesses to close over the next two weeks, sources close to the mater said.

Nishimura told the governors that the government wants to spend the period determining if Abe's emergency declaration, which strongly urged people to stay indoors, is effective in curbing infections, the sources said.

Roughly 56 million people, or about 45 percent of the country's population, in Tokyo, Chiba, Kanagawa, Saitama, Osaka, Hyogo and Fukuoka are subject to the emergency declaration, which calls for people to refrain from nonessential outings and some businesses to shut. There are no legal penalties for noncompliance. 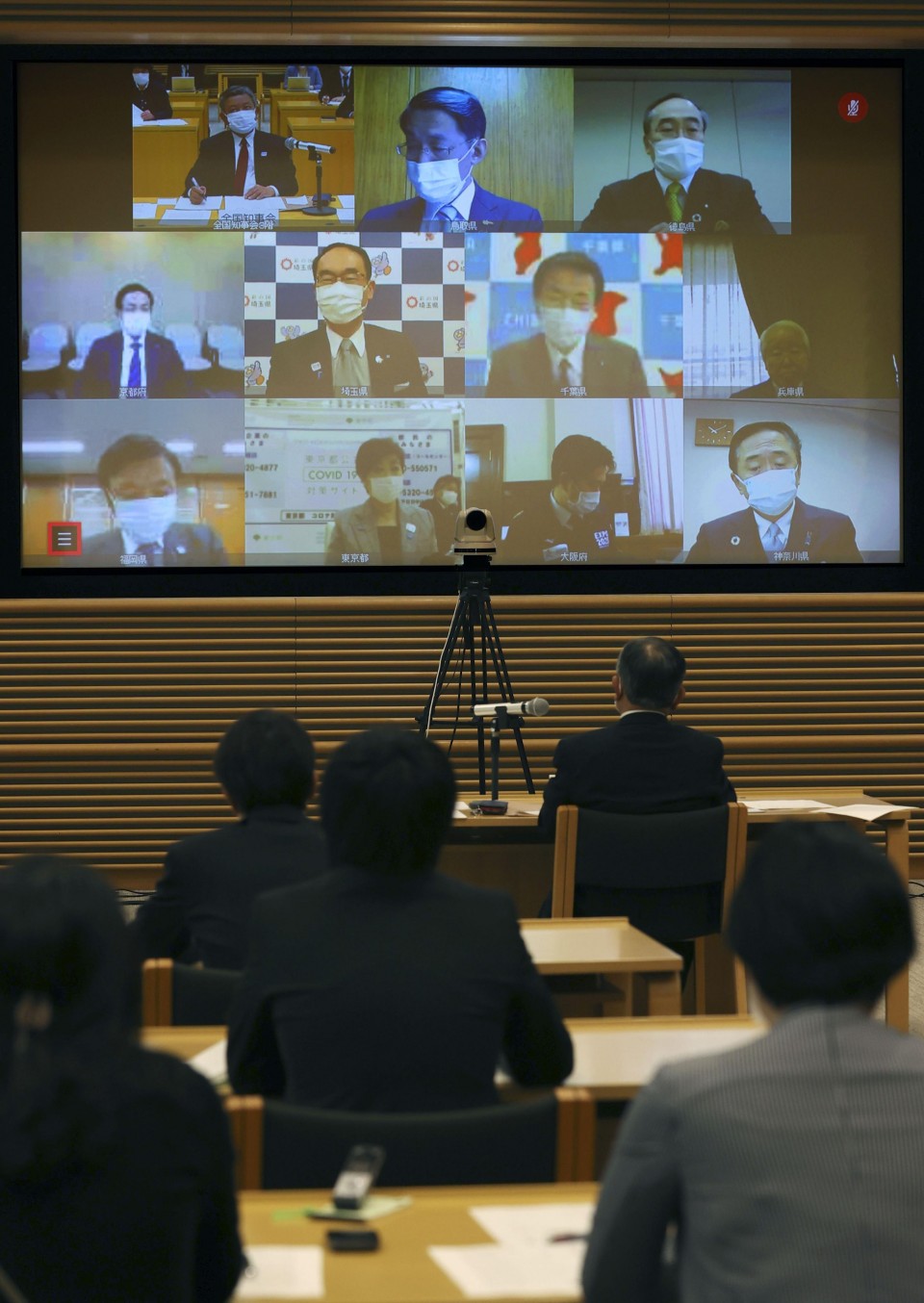 "The government requests for business closures and compensation are two sides of the same coin," Osaka Gov. Hirofumi Yoshimura told his peers earlier in the day.

Tokyo Gov. Yuriko Koike echoed his view, saying the governors "must work together to strongly urge the state" to pay compensation.

"Unlike natural disasters, (the virus) is an enemy we cannot see, but I'd like to regain our peaceful lives as soon as possible by tackling it together," Koike told the governors.

The Tokyo metropolitan government is set to release on Friday a list of industries and facilities it will ask to halt operations, while Osaka and the five other prefectures will not immediately request the closure of private business facilities.

The governors also said the central government should release guidelines for the length of business closure requests and urge people not to flee to areas outside of those covered by the emergency declaration.

The total number of infections in Japan's 47 prefectures has topped 5,000, including about 700 from the Diamond Princess, a cruise ship that was quarantined in February near Tokyo. The death toll stands at about 110.