Hong Kong leader Carrie Lam said Tuesday the territory's public broadcaster is not "immune" from advocating China's "one country, two systems" principle, in a show of solidarity with the commerce minister, who said the broadcaster had made mistakes and should face the consequences.

"Let me make this very clear, either as a public broadcaster or government department, RTHK has to fulfill the very important and fundamental principle of upholding 'one country, two systems,'" Lam told reporters ahead of the weekly Cabinet meeting. "RTHK could not claim immunity by being a public broadcaster and not observe this (principle)."

She said the charter for the publicly funded Radio Television Hong Kong has clearly stated its role in deepening Hong Kong people's understanding of the one-country principle and parameters regulating its operation.

"I certainly endorse and support the stance and position of Secretary Edward Yau," Lam said. 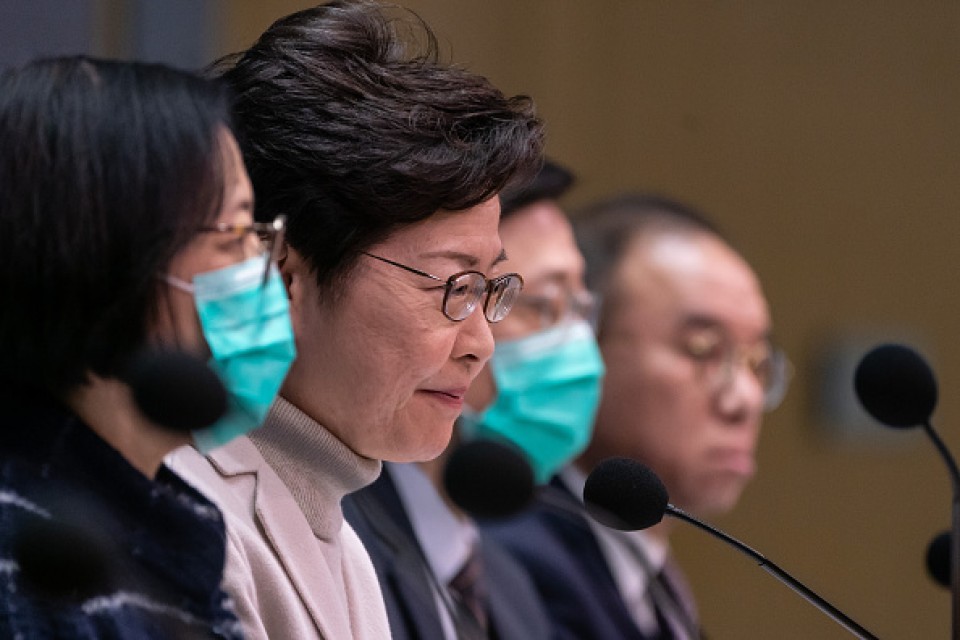 The Commerce and Economic Development secretary, who oversees the operation of RTHK, said last week the broadcaster's editor-in-chief should be held responsible for failing to engender a sense of national identity and promote the understanding of the one-China principle.

The controversy stems from a segment on The Pulse, an English-language program broadcast on March 28, in which Bruce Aylward, the World Health Organization's assistant director general, was questioned about Taiwan's effort in fighting the new coronavirus and its nonmembership saga.

In the program, uploaded on RTHK's Facebook account, Aylward did not react to a question asked in an online interview about whether the WHO would consider Taiwan's repeated requests for membership, opposed by Beijing.

When asked again, he claimed to have not heard the question and told the interviewer to move to another one just before the broadcast connection was lost.

Once reconnected and asked again to comment on Taiwan's efforts in containing the virus, Aylward said, "Well, we've already talked about China" and went on to complement the good job that "all the different areas of China" have done.

The WHO has, in a subsequent statement, acknowledged the incident while claiming that Taiwan's membership to the group should be up to WHO member states, not its staff.

At a special finance committee meeting in the legislature Tuesday, Secretary Yau said it is the presentation of the program, rather than the question asked, that constitutes a breach of the one-country principle.

Wow, can’t even utter “Taiwan” in the WHO? You should set politics aside in dealing with a pandemic. FYI @WHO, 450+ news reports from 40+ countries so far positively covered #Taiwan’s handling of #COVID19. These reports do not mistake us as part of China & #TaiwanCanHelp. JW https://t.co/KbupbUb7NG

"Should, on any occasion, national sovereignty or territorial integrity be violated, the bureau has a supervisory duty to speak out clearly," he said but declined to elaborate on how the program breached such principle. "Hong Kong has free speech, but as a public broadcaster and a government department, the RTHK also needs to bear in mind its editorial duty."

The RTHK has rejected Yau's accusations and insisted that the program, which has not referred to Taiwan as a country, did not violate the one-country principle or its charter.

"The RTHK will not infringe upon the one-China principle, and we have all along been strictly abiding by it," Leung Ka-wing, RTHK's editor-in-chief and the government's director of broadcasting, said at the committee meeting.

China-friendly politicians have been questioning the role of the publicly funded broadcaster and grown more intolerant over its reluctance to become a government mouthpiece over the years since the former British colony was returned to Chinese rule in 1997.

Programs mocking Beijing and local authorities, in particular, have been openly condemned, followed by calls to bring the liberal broadcaster under control with funding cuts.