A sumo stablemaster and five wrestlers have contracted the new coronavirus, the Japan Sumo Association said Saturday, casting doubts on whether next month's Summer Grand Sumo Tournament in Tokyo can go ahead as scheduled.

According to the JSA, stablemaster Takadagawa has tested positive for the virus along with Hakuyozan, a wrestler at his stable in Tokyo who competes in the second-tier juryo division. 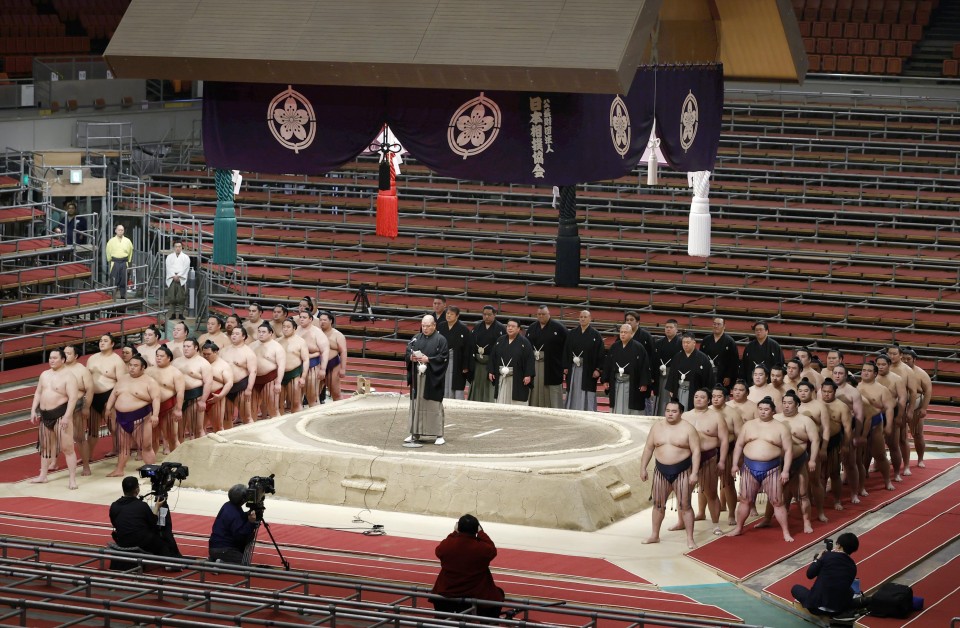 (Japan Sumo Association Chairman Hakkaku delivers a speech in closing the Spring Grand Sumo Tournament at an empty Edion Arena Osaka on March 22, 2020. The tournament was held behind closed doors due to the outbreak of the new coronavirus.)

Four wrestlers who belong to the lower divisions have also contracted the virus. The JSA did not disclose their names and stables, citing privacy reasons.

Earlier this month, a wrestler competing in one of the lower divisions tested positive for the virus, marking the first confirmed case in the country's ancient sport.

The JSA delayed the start of the 15-day summer tournament in Tokyo by two weeks in response to the pandemic, with the opening day now slated for May 24. But it has said the meet might be held without spectators or canceled altogether depending on the situation.

"We need to consider carefully while referring to the advice from experts," said sumo elder Shibatayama, the association's communications director, before adding that the summer tourney's rankings would be published on Monday as scheduled.

Japanese sports have been put on hold due to the virus pandemic with tournaments and leagues postponed or canceled to protect the health of the athletes and those attending.

The JSA was forced to take drastic measures against the coronavirus at March's spring tournament in Osaka, which was held behind closed doors in a bid to slow the spread of the virus.

The event would have been canceled had any wrestler or association official tested positive.

According to the JSA, the 53-year-old Takadagawa developed a fever earlier this week. He and the five wrestlers are currently hospitalized.

The association has banned wrestlers from training or going outside for two weeks if a member of their stable has tested positive for the coronavirus. It has also requested other stables exercise "self-restraint" and not engage in workouts requiring physical contact between wrestlers.