Some people in Japan expressed their anxiety Tuesday about how their daily lives and businesses will be affected by the state of emergency to be declared by Prime Minister Shinzo Abe in an effort to curb the spread of the novel coronavirus.

Under the declaration that will take effect Wednesday through May 6, governors in Tokyo, Saitama, Kanagawa, Chiba, Osaka, Hyogo and Fukuoka prefectures are expected to seek stronger restraints on nonessential outings and certain business operations.

"Because the (emergency) measure will be declared, please give us some more time before our work is completed," a worker in Tokyo's Marunouchi business district asked a client over the phone. "There is nothing we can do," the man in his 30s told Kyodo News as he hurried to his office.

A 22-year-old who was newly hired by a construction company said he saw fewer people riding the train during his morning commute. "But in my case, construction sites are never still and I will have to go there after my training ends. It is not a job that allows working from home," he said.

Even though the emergency declaration will not lead to lockdowns on a scale seen in other countries hit hard by the virus like China and France, some people were eager to buy items and receive services before the measure takes effect.

State of emergency a heavy blow to consumption, production in Japan

More than 70 people queued at a drug store before its 9 a.m. opening to get face masks in Saitama. An employee periodically shouted, "We have enough masks for you to buy so we ask for your cooperation and that you do not run or push."

"As we face (the imminent declaration of an emergency), I wanted to get items such as masks whenever available," said a woman in her 60s.

In the same city, about 10 people formed a line in front of a low-cost hairdresser before its opening.

"I came in a hurry because I'm worried that there will be no opportunity to get a haircut for the foreseeable future," said a woman in her 30s who brought her 8-year-old son with her. Hairdressing saloons may be asked to shut under the state of emergency.

Small businesses in Osaka, which will also be subject to restrictions under the state of emergency, worried that they would go under if unable to operate.

"We will have to give up if the government makes a strong request (for business closures)," said Kingo Yoshida, a 68-year-old manager of a barbershop founded some 90 years ago.

"I know there is a risk of virus infection from customers but if our business is suspended for a long time, then my shop will be lost," he added. As a measure against the virus, Yoshida has decided to allow only one customer per hour in the shop.

Many of his elderly regular customers, seen as vulnerable to the COVID-19 disease, stopped coming. Some of those who came requested to have their hair cut shorter than usual since they do not know when they can return.

Pachinko parlors will also be affected by the declaration. A 68-year-old cleaner frequented one in his Osaka neighborhood but stopped going as he was worried about getting infected, even though the machines were cleaned with alcohol.

"I live alone and it's lonely at my home. I wish they wouldn't take away pleasures from old people," he said.

Businesses in major tourist resorts near Tokyo were worried about their bottom line, fretting over the state of emergency that will last until the last day of the Golden Week holiday in May, following a sharp drop in customers amid the coronavirus spread.

Hakone in Kanagawa Prefecture famous for its hot springs saw few customers on Tuesday, with a gift shop manager saying he may have to close his shop from Wednesday. "I'm worried about the future and our employees," he said. 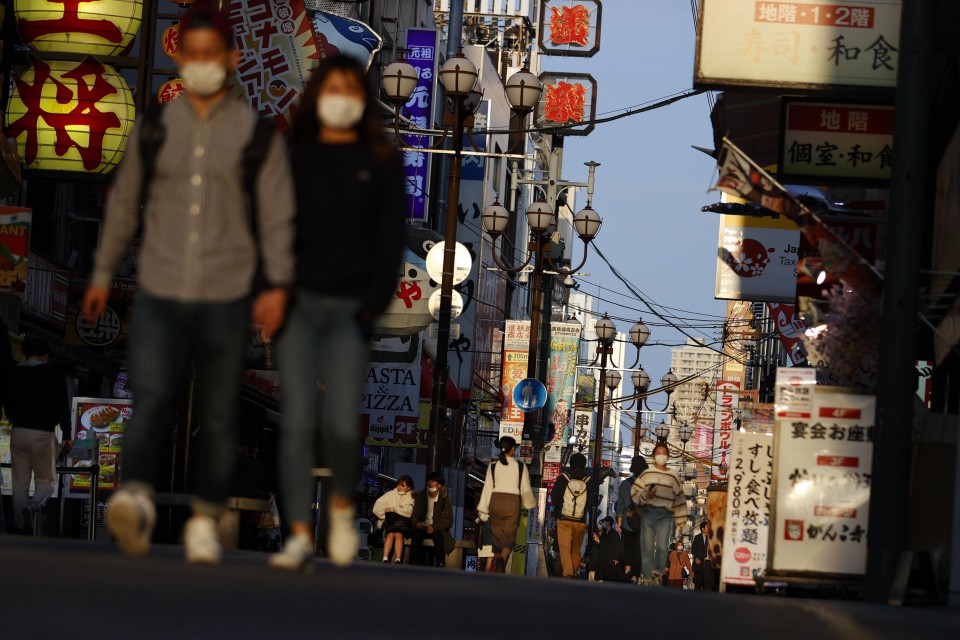 Hakone's tourist association said the number of lodgers in March dropped by half from the year before, and is expected to dive more than 70 percent in April.

"We braced ourselves for (the state of emergency) to last until Golden Week, but we are facing a very difficult situation," said Mamoru Sato of the association, with small and midsize businesses concerned about finance and hiring.

Atami, a seaside hot spring resort in Shizuoka Prefecture where 80 percent of tourists come from Tokyo and surrounding areas, is also hit hard.

According to its hospitality association composed of around 70 hotels and ryokan, the number of lodgers in the first half of March decreased 40 percent from the previous year, and there are hardly any tourists now.

"We can't foresee the future at all. Even if things calm down, it will take time for customers to return," said a senior association official.

At Kinugawa hot spring resort in Nikko, Tochigi Prefecture, more than half of some 30 member facilities of the Kinugawa Onsen Ryokan Association have suspended their operations since last week.

"If no tourists come, we have no option but to temporarily close because of running costs," an association official said. "We understand that we are not the only ones suffering but if the government doesn't take measures, there may be some facilities that will be forced to go out of business."