Singapore on Wednesday imposed a strict control order that bans all social gatherings, including at home, with harsh penalties such as fines and jail time to enforce a partial lockdown that started this week to curb community spread of the new coronavirus.

The move came after Parliament passed a "COVID-19 (Temporary Measure) Act 2020," which includes "control order" regulations that gives the health minister sweeping powers to impose restrictions on people's movements, close down business activities, schools, recreational facilities and even places of worship, and also slap severe penalties for those who flout the order.

The control came into force on Wednesday, the Health Ministry said in a short statement.

Singapore started a monthlong partial lockdown this week, with the closure of nonessential businesses and schools and universities, while people have been urged to stay at home and to also practice social distancing when outside their homes by standing 1 meter apart from each other in queues.

The tighter controls came after Singapore saw a surge in local transmissions even though the entry of short-term visitors have been banned.

Singapore reported 142 cases of COVID-19 on Wednesday, a record high, bringing the total number of cases in the city-state to 1,623, including six deaths. 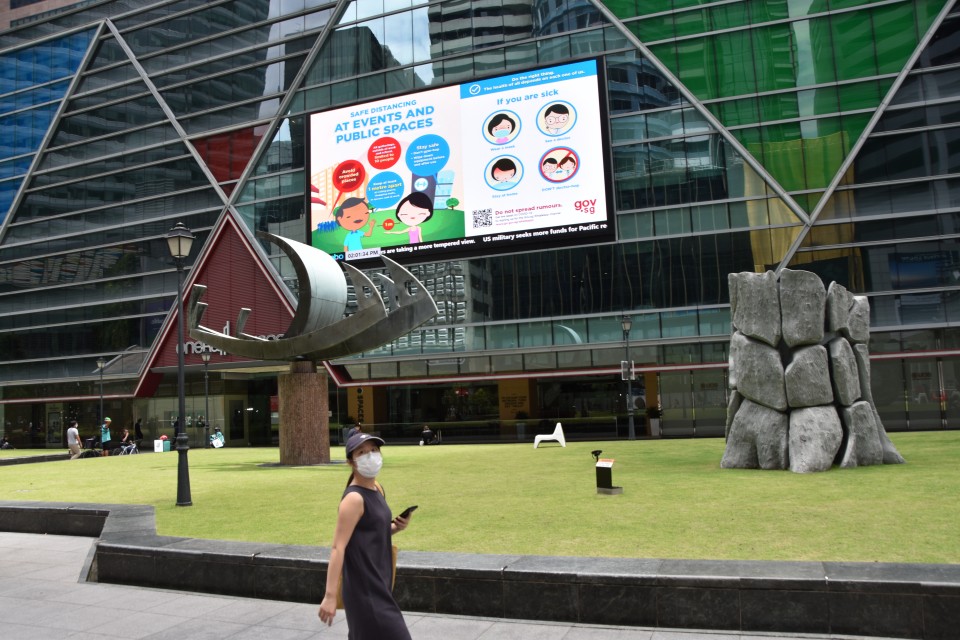 Prior to this, the Health Ministry had implemented "safe-distancing regulations" on March 26 that banned gatherings of more than 10 people outside of work and school, and requirement to maintain a distance of 1 meter from each other, with a fine of up to S$10,000 (US$7,000) or up to 6 months in jail, or both, for offenders.

"We will now also disallow social gatherings of any size in both private and public spaces. This would include having private parties or gatherings with families or friends not living together, at home or in public spaces," Heath Minister Gan Kim Yong told Parliament on Tuesday.

But he also added that "enforcement officers will look at the facts of each case carefully, including whether there are reasonable explanations for any noncompliance, before taking action."

The first day of the partial lockdown on Tuesday saw Singapore streets and trains less crowded than usual. At the Raffles Place business and financial district, a few workers from banks, which are allowed to remain open as an essential service provider, were seen having their lunch in a park.

"It was a ghost town this morning, not many people or cars," said Jeremy Tan, 29, a data engineer in a bank of the condition at Raffles Place, where most businesses have closed their operations due to the government directive.

The government said it served more than 7,000 written advisories to members of the public on Tuesday for breaching its rules on safe distancing measures at public places such as when queuing.