The 80,000 volunteers who signed up for the postponed Tokyo Olympics and Paralympics will be offered another chance to lend a hand if the events take place as rescheduled next summer, but whether they can free up their time again is another question.

Some have tweeted reasons why they have given up plans to help out. One wrote, "I can't make a living if I don't do my daily job properly," while a younger volunteer declared, "I'm pulling out from being a volunteer due to my job hunting next year."

A 33-year-old woman and expectant mother from Kawaguchi in Saitama Prefecture, north of Tokyo, was set to be involved in table tennis events during the Paralympics. She is no longer sure she can do so next year.

"The first hurdle would be whether I can secure a slot for my child in nursery school. Then there's the issue of gaining the understanding of my workplace and getting paid leave. It's a tricky issue," she said.

A 57-year-old man from Zushi, Kanagawa Prefecture, southwest of the capital, was scheduled to volunteer at the venue in Yokohama for baseball and softball. He urged the organizers to swiftly present new schedules, saying he needs to balance his time between work and preparing for being a volunteer. 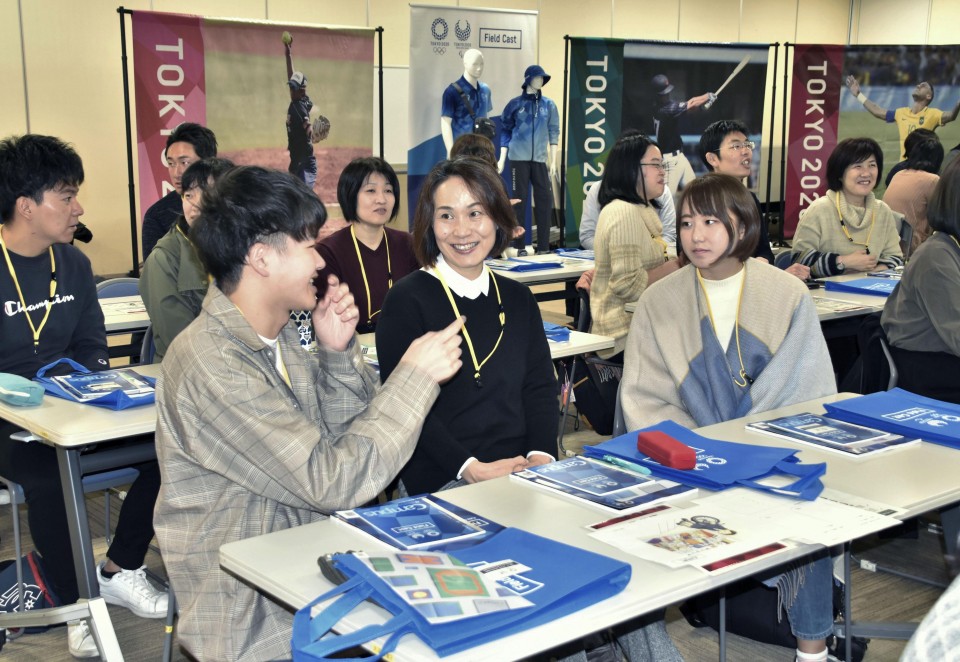 (File photo taken in November 2019 shows volunteers for the Tokyo Olympics introducing each other during a training session in Fukushima, northeastern Japan)

Over 200,000 people applied to be volunteers at venues and the athletes' village, well above the 80,000 targeted by the organizers. Training started in October for those chosen before they were informed of their respective venues and roles in March, but things have stalled since the coronavirus outbreak.

The organizers say they will wait for the new schedules and venues to be decided before tallying the number of those pulling out and finding their replacements from among the 120,000 candidates who originally missed the cut. There will be no new recruitment.

"There's a strong negative image toward the games with the one-year postponement. The organizers need to show their sincerity to those who have no choice but to pass up their chance," Bunkyo University associate professor Masaya Ninomiya, specializing in sports sociology and well-versed in matters about sports volunteers, said.

He is encouraging the organizers to use online interviews and training for the supplementary volunteers, while also calling for sustained efforts to keep spirits high for those participating next summer.

"Sending out positive messages to participants and devising ways to keep their motivation high will be the key to successful games," Ninomiya said.