Finance chiefs from the Group of Seven industrialized nations agreed Tuesday to provide debt relief to help developing countries finance emergency measures against the spread of the new coronavirus.

The G-7 finance ministers and central bank governors said after a videoconference they would suspend debt payments owed by "the most vulnerable and poorest countries" to others if all Group of 20 economies support the move.

"Ministers and governors support multilateral efforts to assist these countries and stand ready to provide a time-bound suspend on debt service payments," they said in a summary issued by the chair, the United States. "The scale of this health crisis is generating unprecedented challenges for the global economy."

The debt moratorium plan is aimed at helping developing countries free up funds to take steps to contain the pneumonia-causing virus and support economic activities which are expected to minimize the effect on the global economy.

The ministers and governors also reaffirmed their pledge to "do whatever is necessary to restore economic growth and protect jobs, businesses" as the virus spread is poised to put the global economy in negative growth.

The world economy is projected to contract by 3.0 percent in 2020 from a year before due to the virus pandemic, suffering the worst setback since the Great Depression in the 1930s, the International Monetary Fund said Tuesday.

"We agreed to mitigate the impact on economic activities as much as possible and to help lay the basis for strong economic growth," Japanese Finance Minister Taro Aso said at a press conference after the videoconference. 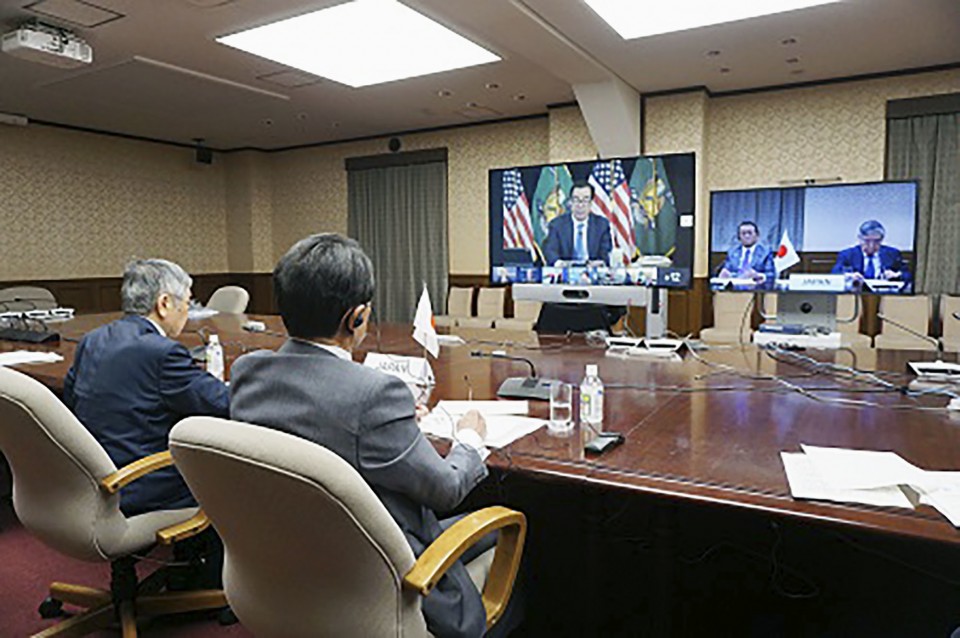 The virtual meeting was held a day after the IMF outlined immediate debt relief for 25 developing countries, including 19 African nations, to be offered through its $500 million revamped Catastrophe Containment and Relief Trust fund.

The countries will be provided with grants to cover their IMF debt obligations for an initial phase over the next six months.

The G-7 meeting comes amid mounting concerns about capital outflows from emerging economies as uncertainty over the pandemic sends investor sentiment plunging.

The capital flight could make it more difficult to keep enough cash in hand for low-income countries, which are also suffering from local currency depreciation against the U.S. dollar triggered by the virus spread.

The G-7 finance chiefs were originally to hold a two-day regular meeting in Philadelphia from Tuesday, but the event has been switched to a teleconference due to the pandemic. The global death toll from COVID-19 has surpassed 120,000 on Tuesday with over 1.9 million people infected, according to Johns Hopkins University.

Finance ministers and central bankers from the G-20 countries are set to hold a videoconference on Wednesday, while the IMF and the World Bank will hold the annual spring meetings in virtual format later this week.

In a statement issued after the previous G-7 conference call on March 24, the group said they are "ready to contribute further resources to multilateral efforts" to help "the most vulnerable and least developed countries" deal with the impact of the pneumonia-causing virus outbreak.

According to the IMF, over 90 countries have requested emergency financing from it to help ease the impacts of the pandemic. IMF Managing Director Kristalina Georgieva said the international body has "never seen such growing demand."

Leaders from the G-7, which groups Britain, Canada, France, Germany, Italy, Japan, and the United States, as well as the European Union, held emergency telephone talks on March 16, in which they agreed to regularly communicate on issues related to the virus pandemic through their finance ministers.