Many schools in Japan reopen after monthlong coronavirus shutdown

Schools in many parts of Japan resumed classes Monday after being closed for more than a month due to the coronavirus outbreak, with infections continuing to rise in Tokyo and other major cities, putting Prime Minister Shinzo Abe on course to declare a state of emergency.

At an elementary school in Mito, Ibaraki Prefecture, some 230 students took part in a ceremony marking the start of the new academic year. 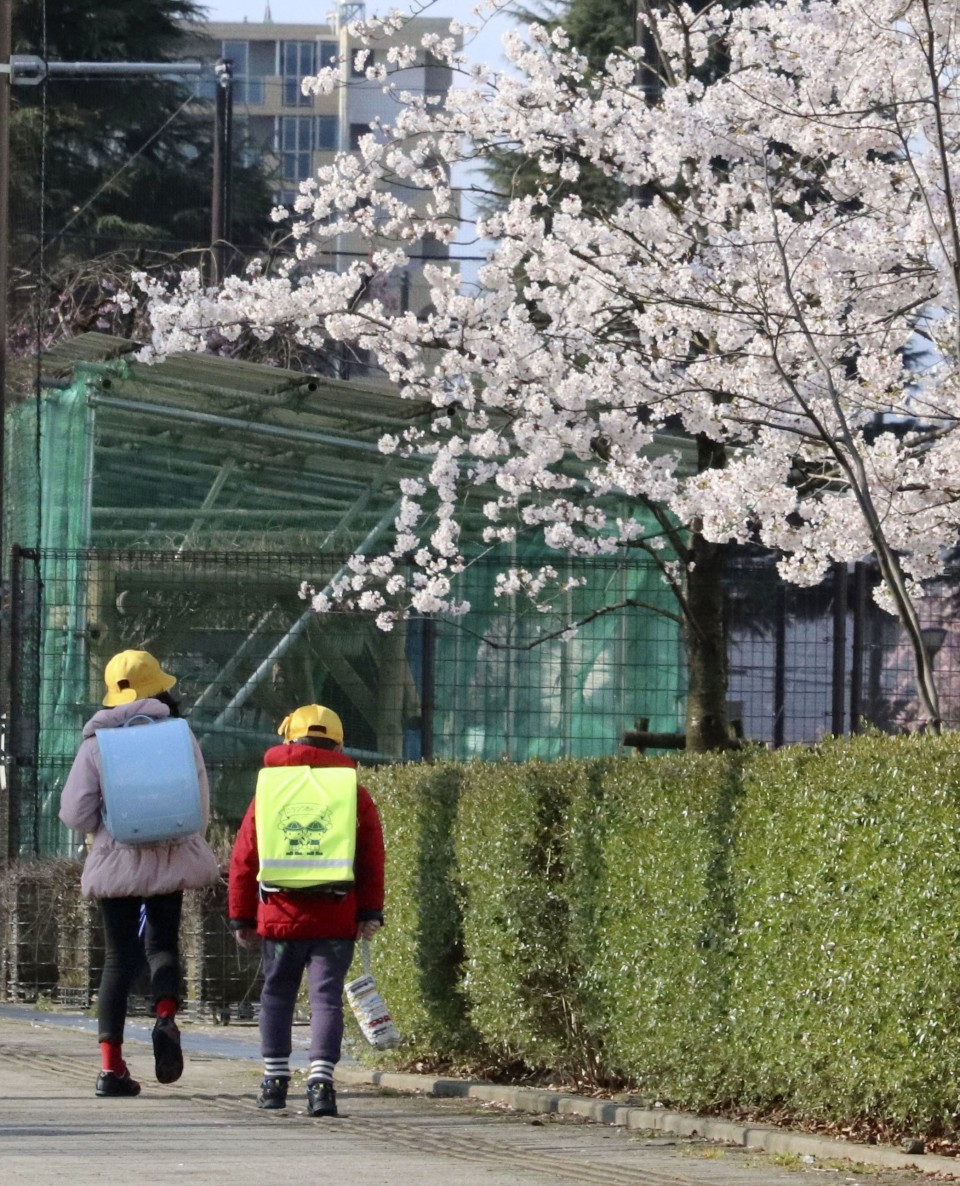 During proceedings, the children stood 2 meters apart in the schoolyard while the principal instructed them to thoroughly wash their hands and check their temperatures every day.

"I am glad I was able to meet my friends after a while. The cherry blossoms are beautiful and the ceremony outside felt nice," said Kanon Nakamura, 11.

Schools in Tokyo and other areas where infection counts are growing remained closed and were expected to stay that way for at least another month. Some local governments retracted earlier decisions to resume and have extended closures.

A Tokyo-run high school said it will be closed again after holding entrance and opening ceremonies for each grade, while the city of Yokohama, near Tokyo, said it will keep its schools shut until April 20.

Aichi Prefecture, which opened its schools for ceremonies, said it will close them again from Tuesday, while Hyogo and Kumamoto prefectures also said they will extend closures through April 19 instead of sticking to their original plans to resume on Wednesday.

A woman who attended her daughter's entrance ceremony at an elementary school in Nagoya, the capital of Aichi Prefecture, said she was glad the ceremony was held despite the uncertainty.

"I don't know how things will turn out from now on, but we can only follow what the city decides," she said. 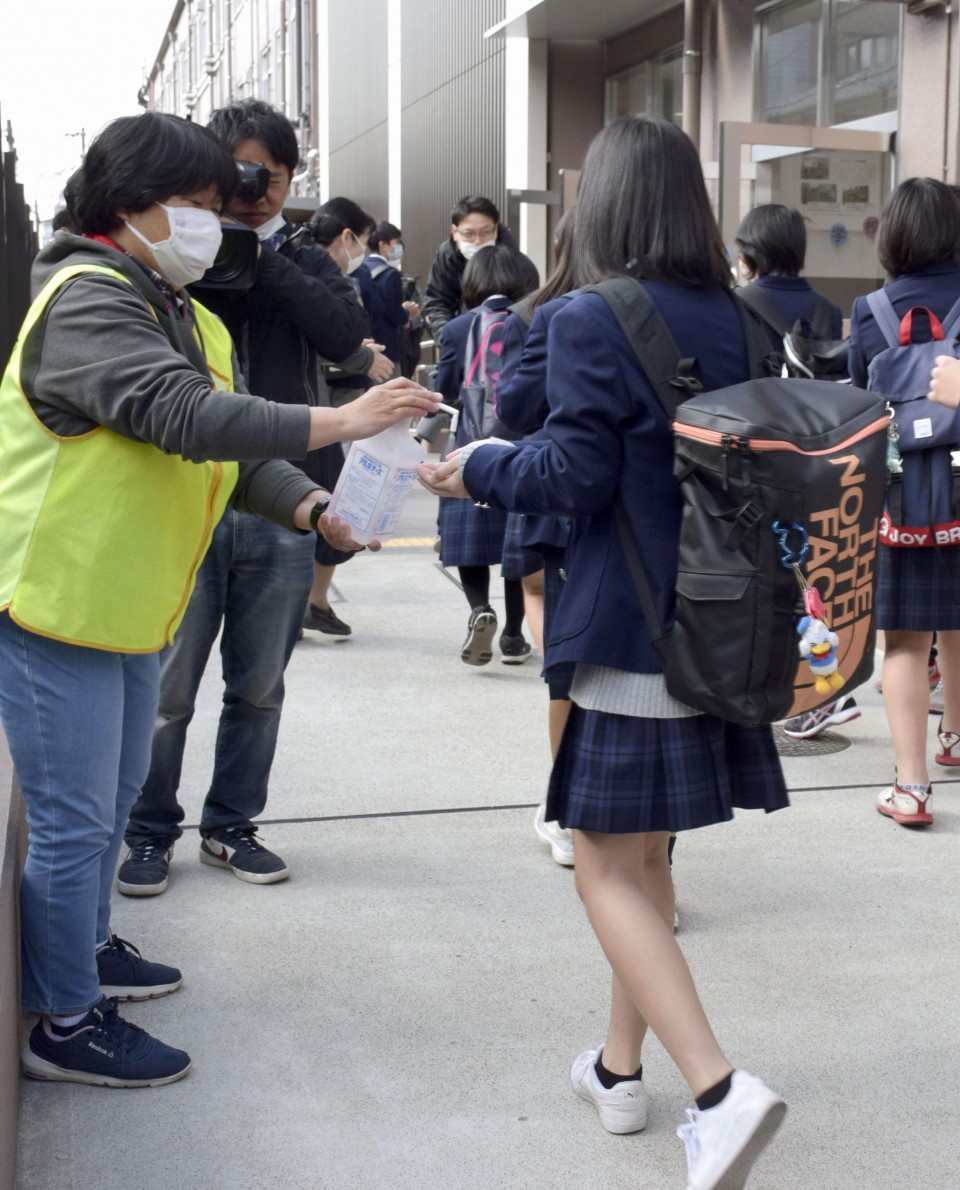 Abe's state of emergency declaration is expected on Tuesday and will take effect Wednesday, enabling prefectural governors to tell the public to stay at home and request the closure of schools and other facilities.

On Feb. 27, Abe requested that elementary, junior and senior high schools nationwide shut from March 2 through the end of their spring breaks, which typically finish in early April, forcing many students to study at home during the period.

The education ministry informed education boards nationwide on March 24 of guidelines for the resumption of classes, including instructions to ensure classrooms are well ventilated and that students' temperatures are checked every morning at school if they have failed to do so at home.

The guidelines were updated by a government panel on Wednesday, dividing Japan into three categories -- areas where infections are spreading, those where infections have been confirmed and areas with no confirmed infections -- allowing for schools to reopen in areas designated in the latter two.

Parents' reactions to the decision to resume classes were mixed, with some expressing relief while others worried about their children being exposed to the virus at school.

In Kyoto, where elementary schools are scheduled to resume on Wednesday, Megumi Aoyama, 34, welcomed the move, saying she was worried that the further prolonging of school closures would affect her daughter who enters elementary school this year.

"I hope the school will teach her hand-washing habits and other aspects of hygiene," she added.

Ryoko Nishioka, 42, who has three children attending an elementary school in the city of Kochi said she does not feel the school is safe during the virus crisis.

"There are about 40 kids in one class, so they cannot avoid overcrowding. I want our school to reduce the number of students per class," she said.

In Tokyo, where school closures continue, a 38-year-old mother of a second-grader expressed anxiety at the ongoing situation, saying it cannot last too much longer.

"He is spending longer in front of the TV and I am scolding him more frequently since I am busy preparing meals. I am afraid of the coronavirus, but we are reaching our limit living like this," she said.