Japanese prefectural governors on Friday urged the central government to be firmer in asking the public not to travel during the upcoming Golden Week holidays after it expanded a state of emergency to all of the country in a bid to stem the growing spread of the new coronavirus.

At an online meeting, members of the National Governors' Association said people should be requested to avoid travel to hometowns and tourist trips during the holidays starting late April. 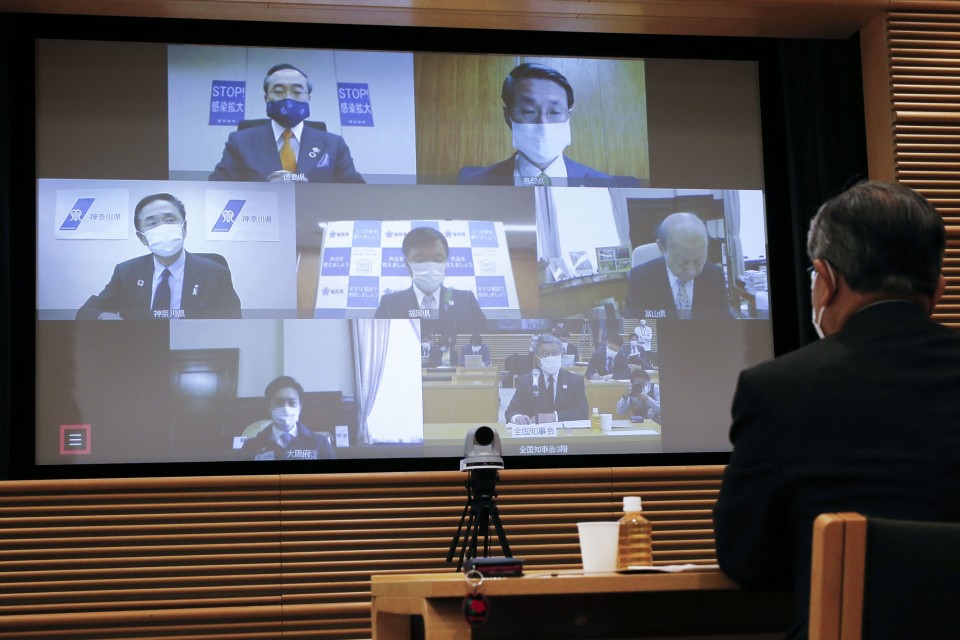 (Governors of Japanese prefectures attend an online meeting of the National Governors' Association on April 17, 2020.)

"There is a high chance that a massive migration will occur toward Golden Week," Tokushima Gov. Kamon Iizumi, head of the association, said a day after the state of emergency, effective through May 6 when the holidays end, was extended to the entire country.

"We are at a critical phase in preventing the virus from spreading. All governors would like to overcome these difficult times by uniting," he said.

Some called for stricter measures, with Tochigi Gov. Tomikazu Fukuda saying, "Traveling across prefectures should be strictly limited, and we also need to consider developing legislation."

The governors also urged the central government to compensate for business suspensions and proposed that it also extend special subsidies totaling 1 trillion yen ($9.3 billion) for local governments as part of steps to financially aid companies complying with requests for operation closures.

After initially declaring a state of emergency for Tokyo, Osaka, Fukuoka, Chiba, Kanagawa, Saitama and Hyogo prefectures on April 7, Prime Minister Shinzo Abe extended it to the remaining 40 prefectures on Thursday.

Under the state of emergency, people are asked to refrain from making nonessential outings, while governors are given the power to expropriate private land and buildings for use in the battle against the virus, requisition medical supplies and food from companies that refuse to sell them and punish those that hoard or do not comply.