The government's stay-at-home request to curb the spread of the new coronavirus in Japan has made it not just a painful few weeks for Japan's restaurant industry, but also for those who love dining out.

But as Japan's eateries stare at empty tables and plunging revenues, their most loyal customers are looking for ways to keep them afloat.

Many are regularly buying takeouts, while others are setting up and supporting crowdfunding initiatives as well as new IT services that allow them to book and pay now for meals that won't be served until normality returns.

Unlike in many countries hit by the pandemic, restaurants and bars can stay open in Japan under its state of emergency, imposed initially in the Tokyo and Osaka metropolitan areas earlier this month and since extended nationwide.

But they have been asked to stop serving alcohol by 7 p.m. and close by 8 p.m. in most areas, severely curtailing customers. According to estimates by SMBC Nikko Securities Inc., household spending on eating out will decrease by 75 to 80 percent through the May 6 planned end of the emergency in the seven prefectures where it was first put in place.

"I think a lot of restaurants, especially those serving at dinnertime, are under pressure about ways to survive, such as starting takeouts or changing opening hours," said Akihito Sakurai, who frequently buys takeout lunches in his neighborhood in Kunitachi in western Tokyo while working at home. 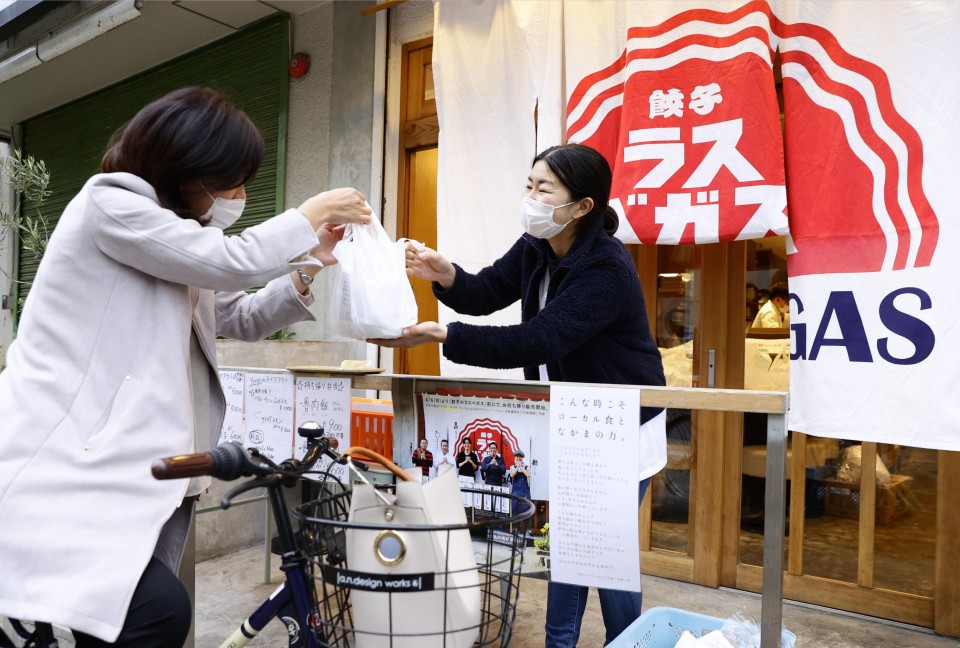 (A woman takes out a meal at a restaurant in Fukuoka, southwestern Japan.)

Sakurai, who lists to-go meals at an Irish restaurant as among his favorites, said maps and websites showing information about restaurants doing takeaways and deliveries, made by a local association of businesses, have been helpful.

"I want to be of help to the restaurants," said Sakurai. "Through visits for takeouts, I think my relationships with the restaurants I used to frequent before the coronavirus crisis have become even stronger. I've also discovered new places in the neighborhood that I would certainly like to dine at after the virus is contained."

Sakurai is pleased to see restaurants proactively putting out information about themselves, saying he has discovered eateries he might have just casually passed by had the coronavirus outbreak not happened.

"I feel eaters like myself should write about them on social media," said Sakurai, who has also bought prepaid tickets and made donations at local jazz bars he likes which have been forced to close for the time being.

Hiroko Mikami, a 36-year-old worker at an embassy in Tokyo, shares similar concerns about her favorite Italian and Thai haunts near her home and says she is getting takeouts more than she used to. "I am worried particularly that eateries that are not part of major chains will close," she said.

Satoshi Hotta, a company employee in Tokyo, came across a new way to help out restaurants while browsing "autoreserve," a smartphone application that automatically reserves a restaurant without the user making a phone call. 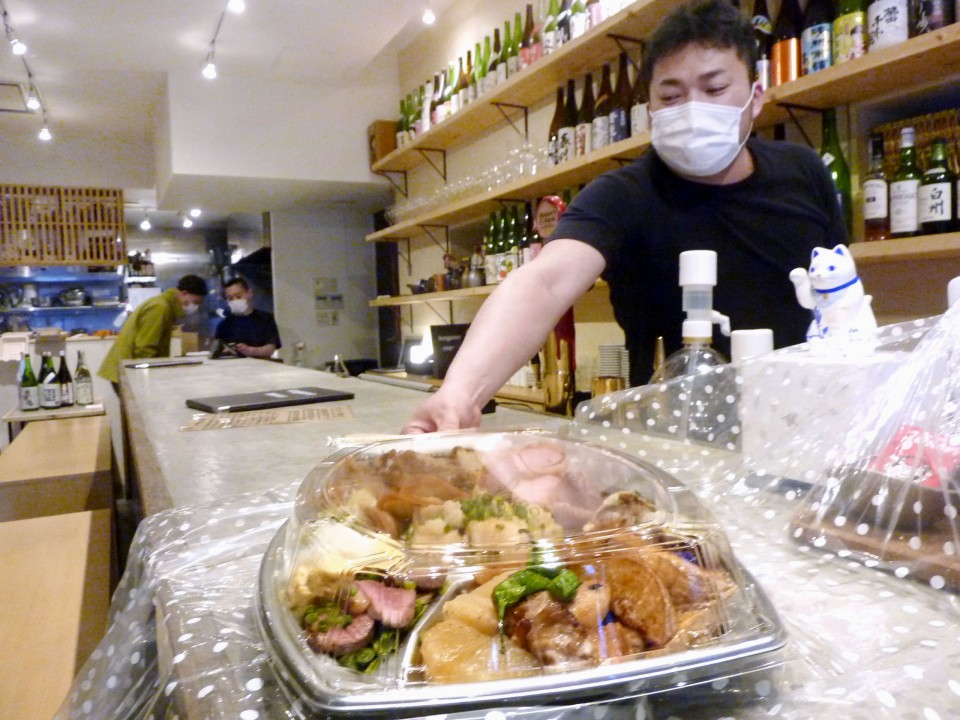 (A staff member at izakaya Kogane in Tokyo prepares a takeout order.)

"I saw a new service involving the purchase of prepaid meal tickets and was interested as a way to support restaurants," Hotta said, referring to an initiative launched April 1 by the app developer and operator Hello Inc.

Hotta quickly bought 30,000 yen ($276) worth of meal coupons at two of his favorite restaurants -- a hamburger shop and steakhouse -- while booking a table for two a month ahead using autoreserve.

"It's sad to see empty restaurants nowadays and wondering whether they might be forced to close down," he said.

Hotta says the ability to pay ahead of time is a convenience he will continue to appreciate even once the pandemic is under control and customers begin filling the seats of restaurants again. "This way, I only have to think about the money I will spend on drinks on the day of dining out," he said.

As of Sunday, autoreserve allowed a user to select from among 28 registered restaurants in Tokyo, Osaka, Fukuoka and elsewhere to buy meal coupons with a reduction of up to 30 percent as well as make reservations using a credit card.

Dates for reservations can be decided tentatively and changed three times. Registered restaurants can also choose the reduction rate for their meal coupons. Cash is transferred to their bank accounts around two weeks after coupons are bought. 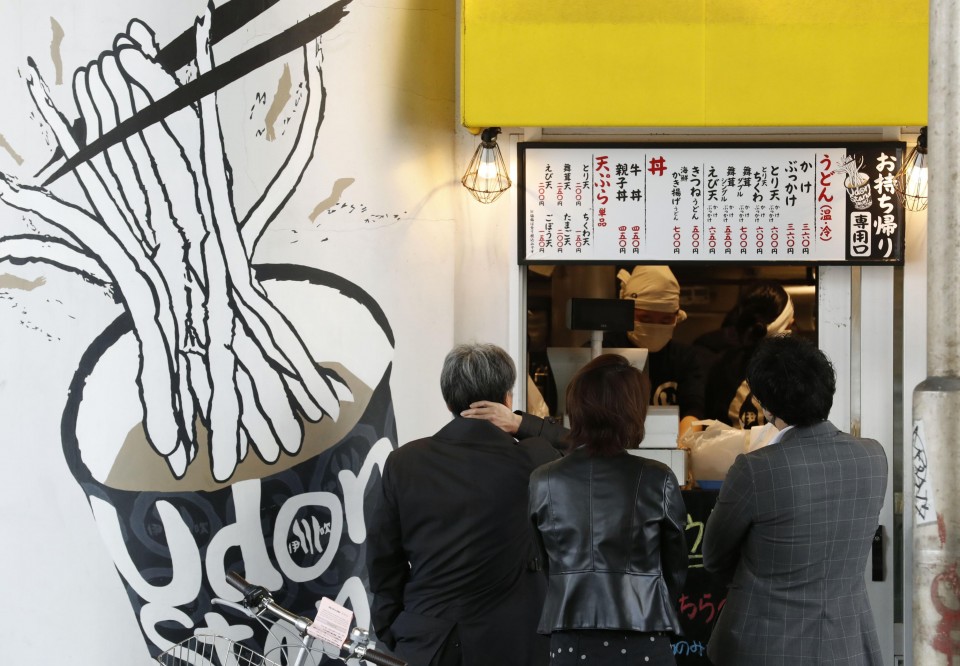 (Customers stand in line to purchase takeout from a shop in Tokyo's Musashino City.)

"I came up with the new service in two days after hearing that restaurants are struggling in the face of massive cancelations due to the coronavirus," said Hello CEO Yuki Hariguchi, 28. "We already had a restaurant reservation app so I decided to add a new feature."

"I know there are gift tickets that can be used at restaurants but our service allows restaurants to have concrete revenue plans. They can know in advance who will come to eat at their places," Hariguchi said.

Fledgling prepaid ticket services like Hello's to help restaurants hit by the coronavirus pandemic are springing up around the country.

Others include an app developed by Gigi Inc., a venture in Fukuoka Prefecture, called "Gochimeshi," which also allows a user to prepay for meals in advance before visiting the restaurant to eat within six months.

The Sendai Chamber of Commerce and Industry in Miyagi Prefecture, meanwhile, has started an initiative where users pick a local restaurant from about 200 choices and pay beforehand to get a meal ticket, with an additional 10 percent in value thrown in.

"Even if restaurants borrow money from the government to continue in business for the time being, they would still have trouble paying back their debts. We can't depend on the government," said Satoshi Aoki, 44, who organized the project.

Going forward, Hello's Hariguchi expects a wave of adoptions of new IT services by restaurants, not just to ride the current pandemic, but in preparation for the risk of future outbreaks.

"Restaurants may start to think of the dangers of just waiting for customers to show up," said Hariguchi, who is now working on a way to allow restaurants to sell products online through his app.

"I thought the service was interesting and we have been hit by cancelations. All of our reservations have been canceled in April," said owner Daisuke Koyano.

"We have set a 10 percent discount for those who will pay in advance and make a reservation in a month or later. I hope this will be attractive to customers," he said.

But even with the support of loyal customers and food aficionados determined to keep eating well with takeouts, many restaurants are likely to take a severe hit.

Hideyuki Araki, an analyst at the Resona Research Institute, pointed out that people spend more on average when dining out compared with ordering in.

"While takeouts and food deliveries have grown as more people stay indoors, they are unlikely to cover the decrease in restaurant sales," he said.