China has temporarily closed all land border crossings with Russia as it confirmed a growing number of coronavirus cases imported by people arriving from its northern neighbor.

The closures, aimed at stemming the spread of coronavirus, were announced by the Chinese Embassy in Moscow on Wednesday. 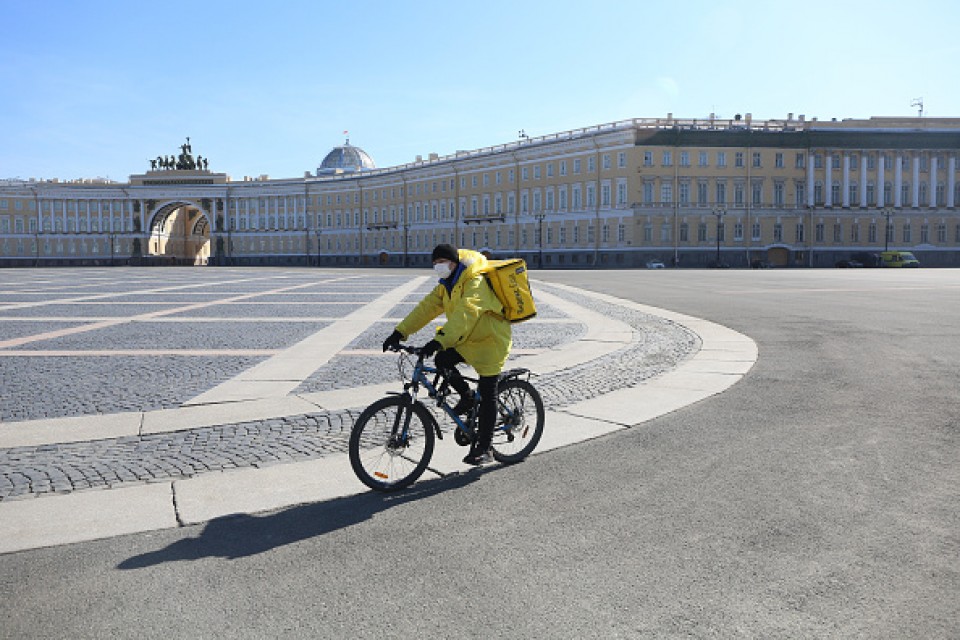 (Employee of Yandex delivers foods on an empty Palace square in the center of St. Petersburg on April 7, 2020.)
[NurPhoto/Getty/Kyodo]

Under the measure, one family member is allowed to leave once every three days to buy necessities.

The city of some 70,000 people has begun building a makeshift hospital to accommodate an influx of patients, as its isolation hospitals are already full, according to the official Xinhua News Agency.

China has already indefinitely banned the entry of most foreigners, and enforced strict quarantine measures for all incoming Chinese, in an effort to curb the number of imported cases.

The country's health authorities on Thursday reported 119 new coronavirus infection cases on the mainland, 63 with symptoms and 56 who showed none, mostly in people arriving from abroad.

The National Health Commission said all but two of the 63 symptomatic cases reported during Wednesday involved people arriving from abroad, with the remainder locally transmitted cases in Guangdong Province.

The tally of confirmed symptomatic cases in mainland China now stands at 81,865, including 1,103 imported.

The commission also announced two more deaths, both in Wuhan, the original epicenter of the outbreak, taking the total number of reported fatalities on the mainland to 3,335.

The financial hub of Shanghai will gradually reopen schools later this month, local authorities said on Thursday, signaling the government's rising confidence that it had brought the epidemic under control.

Classes for the final years of junior high and high schools as well as universities will be permitted to open April 27, said Lu Jing, the director of the city's education commission.

Schools should prepare to resume classes for other grades before May 6, he told reporters at a press briefing, adding that specific dates will be announced later on.

But imported cases and asymptomatic cases remain a challenge in China, with authorities calling for continued vigilance against another wave of infection.