Now that Prime Minister Shinzo Abe has declared a state of emergency to prevent the collapse of Japan's health care systems over the coronavirus outbreak, attention will shift to whether the first-ever such measure in Japan will prove effective.

The declaration is expected to send a powerful message to the public and influence their behavior. People in the seven designated prefectures including Tokyo and Osaka will be asked to stay at home, though there will be no punitive measures for those who ignore the request.

That is the maximum allowed under the current legal framework, and now Japan's tendency to place importance on conformity -- or social pressure -- will come into focus, some experts say.

"Public sentiment was increasingly in favor of Mr. Abe declaring a state of emergency and business organizations such as Keidanren also gave the go-ahead. So he had to pull the trigger," said Iwao Osaka, an associate professor of political communications at Komazawa University.

"Enforcement measures will only be limited, even with the declaration that depends on peer pressure to a great extent," Osaka said.

Despite obtaining the authority to declare a state of emergency in mid-March, Abe did not turn to what was labeled by some government officials as a last resort, but continued to be wary of dealing a possibly debilitating blow to the already fragile economy.

But Abe and senior government officials gradually changed their tone as the daily increase in infections in Tokyo began to top 100.

What was most worrying for the government panel of medical experts advising Abe was the fact that transmission routes were not clear in a growing number of cases, indicating the possibility of an explosive surge.

When Tokyo reported a daily increase of 117 cases, the first above the three-digit threshold, on Saturday, transmission routes were unknown in 80 cases. The following day, there were 92 such untraceable cases as the city confirmed a record 143 new infections.

The overall assessment provided by the government has been that Japan is holding the line against the spread of COVID-19 even though it remains on the brink of an explosive increase.

"The situation is extremely tense. We will decide (to declare a state of emergency) if needed," Yasutoshi Nishimura, Japan's economic revitalization minister who is in charge of the law on the new coronavirus response, said on Sunday.

The following day, Abe announced his intention to declare a state of emergency, saying that the health care system is in a "crisis" situation in urban areas such as Tokyo and Osaka. 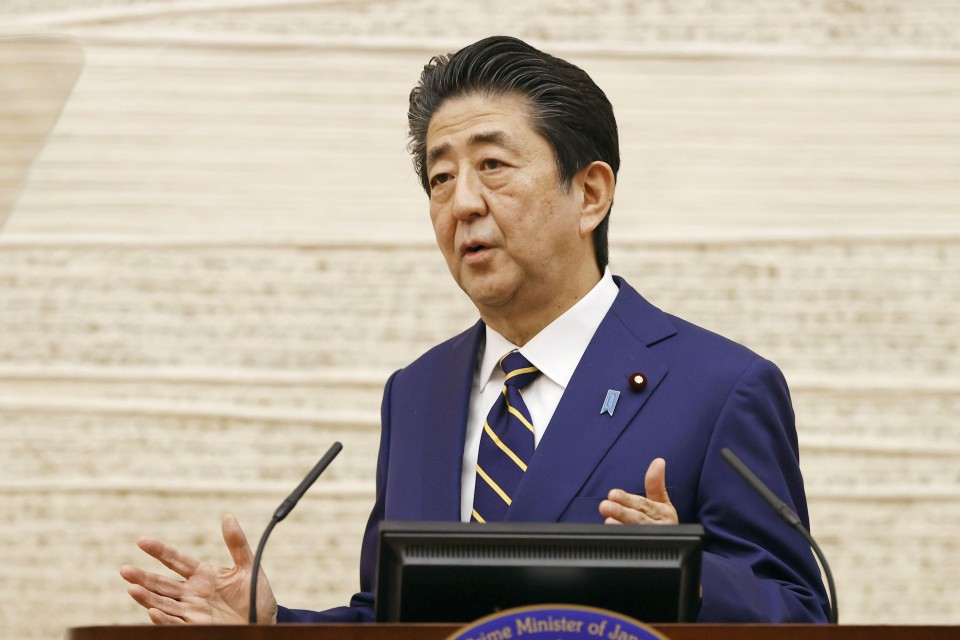 Some government officials had said any shock of a declaration would be curbed if it was timed with the announcement of the country's biggest-ever stimulus package, totaling a whopping 108 trillion yen ($990 trillion), equivalent to about 20 percent of gross domestic product in the world's third-largest economy.

The time was also ripe for Abe after the Tokyo Olympics and Paralympics were postponed by a year until the summer of 2021 due to the global coronavirus pandemic.

Pressure on Abe to make a decisive move from opposition party leaders and some prefectural governors had already grown after his response to the viral outbreak came under intense criticism.

Yu Uchiyama, a political science professor at the University of Tokyo, said the declaration came late.

"Even a few days would make a difference with respect to the timing of an emergency declaration. It looks like he waited for momentum to build from the outside" before taking action, Uchiyama said.

Japan has reported over 4,000 cases of coronavirus infection, including about 700 from the Diamond Princess cruise ship that was quarantined near Tokyo in February.

Opposition lawmakers have raised questions about whether virus testing -- a critical process to grasp the reality of infection -- has been performed on all people who need to take it, pointing to a gap in the numbers in Tokyo between those who consulted health care centers for possible infections and those who actually underwent testing.

In February and March, a total of 41,105 people consulted government designated facilities and 964 took virus tests, according to government data. In Osaka, 1,169 underwent testing while 29,098 contacted local authorities.

In a health alert to its citizens dated on Friday, the U.S. Embassy in Tokyo said the number of confirmed cases in Japan remains relatively low compared to the United States and Europe, and that the government's decision to "not test broadly makes it difficult to accurately assess the COVID-19 prevalence rate."

The embassy expressed confidence in Japan's health care system, but also said "a significant increase in COVID-19 cases makes it difficult to predict how the system will be functioning in the coming weeks."

Prior to his state of emergency declaration Abe told a parliamentary session on Tuesday that the government will double testing capacity from the current 11,000 samples a day to 20,000.

The declaration enables some powerful enforcement measures on the medical front.

Local governors are allowed to expropriate land and facilities to provide emergency medical care if their owners or users refuse to offer the property for no legitimate reason. They can also requisition medical supplies and food.

"Japan has prevented the worst case scenario of a health care system collapse but the government and the people need to continue doing their utmost," Abe said.

"For a month (when the declaration will be effective), I ask people to reduce contact with people by 80 percent, or 70 percent at least, from normal times," he added.