Drive-through services in Japan, once limited mainly to take-out meals, have begun to include tests for the new coronavirus and face-mask distribution as the country battles the virus pandemic.

Japan has yet to introduce nationwide drive-through testing for the virus that causes COVID-19, but the cities of Niigata and Nagoya adopted the method in March. Doctors and medical staff in protective gear stand outside cars to check people, going through a list of diagnostic questions and taking swabs from their throats.

Around 260 people in the prefecture have taken the virus test so far and none of them tested positive. As of Wednesday, the prefecture received over 3,800 phone consultation requests regarding the virus.

"We need to take measures before things get worse and stop the spread (of the virus) at an early stage even if we start to see infections here," the governor said. 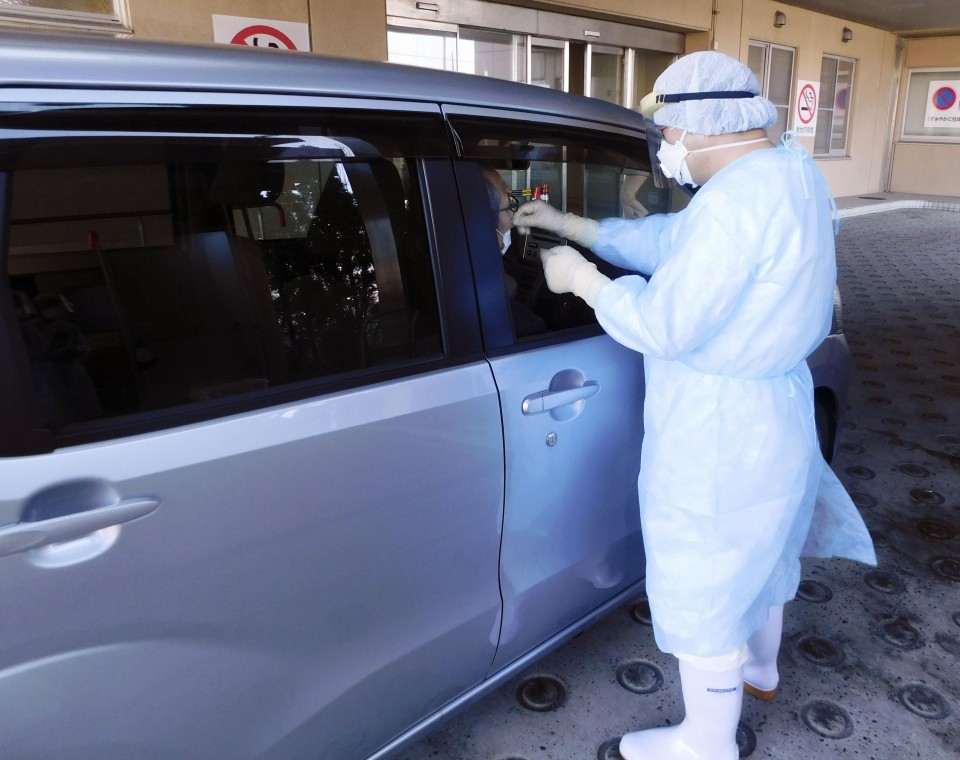 (Supplied photo taken in March 2020 shows a demonstration of drive-through coronavirus testing in the city of Niigata.)
[Photo courtesy of Niigata city]

The speed of the process and the advantage that cars offer to avoid crowds has drawn attention.

Prime Minister Shinzo Abe said on a television program Tuesday he would consider introducing roadside testing hubs as he pledged to double Japan's virus testing capacity to 20,000 samples a day, shortly after declaring a state of emergency for Tokyo, Osaka and five other prefectures.

South Korea has been aggressively conducting drive-through testing since February, followed by such countries as the United States, Brazil, Britain, Italy, Malaysia, Spain and the United Arab Emirates.

Japan has been criticized domestically and internationally for not broadly conducting virus tests, which makes it difficult to accurately assess the COVID-19 prevalence rate.

In Ibaraki Prefecture, northeast of Tokyo, the town of Sakai and the city of Joso delivered face masks to local residents through a drive-through system.

"People can't help but congregate if they have to get in line (physically). We were able to provide masks quickly and there was no disorder," said a Joso official in charge of the distribution.

With people asked to refrain from unnecessary outings to curb the coronavirus spread, the food industry has made greater effort to retain customers with drive-through services.

Mos Food Services Inc., the operator of the Mos Burger chain, already improved buns and packaging for drive-through customers in October, when Japan's consumption tax hike made it more expensive to dine in than take out.

The percentage of takeaway customers including those who buy meals from their car windows rose to 70 percent after the coronavirus hit the country from 60 percent, according to the company.

"We don't foresee an increase in the number of people eating at our stores, so we'd like to focus on take-outs," said an official of the burger chain.

High-end food is taking a similar route. A restaurant of Hotel Happoen Shika no Yu at the Fujimi Kogen highland resort in Nagano Prefecture, central Japan, has started a lunch drive-through.

Many orders have been made from residents of nearby villas and the hotel said it wants to deliver "the chef's taste."

The coronavirus is also changing ways people enjoy Japan's "hanami" cherry-blossom viewing. Many people have posted pictures of blossoms on Twitter, with the hashtag "Drive-through hanami."

One popular spot is a 20-kilometer drive lined with 6,500 cherry trees in the northeastern Japan prefecture of Aomori, considered by people there as "the world's best" for cherry-blossom viewing. The blossoms have yet to appear in the region.

"There's no hint of a festival, and no one will be physically congregating there," said Shinkichi Oyama, a senior official at a local tourist association.

BOJ lowers assessments of all 9 regional economies over coronavirus

Japan's Aichi Pref. asks gov't to place it under state of emergency