China has launched an epidemiological survey in nine regions, including hardest-hit Hubei Province, to evaluate the full scale of asymptomatic infections with the novel coronavirus and population immunity levels, the official China Daily newspaper reported Wednesday.

In Wuhan, Hubei's provincial capital and the original epicenter of the outbreak, 11,000 of its 11 million population will undergo both nucleic acid tests using throat swabs to detect asymptomatic infections and tests for antibodies in blood samples to determine if individuals have developed immunity to the coronavirus.

On Tuesday, 880 randomly selected Wuhan residents from different districts were tested. According to an official of China's Center for Disease Control and Prevention residents in Beijing, Shanghai and Chongqing municipalities as well as Liaoning, Jiangsu, Zhejiang, Guangdong and Sichuan provinces are also expected to undergo testing. 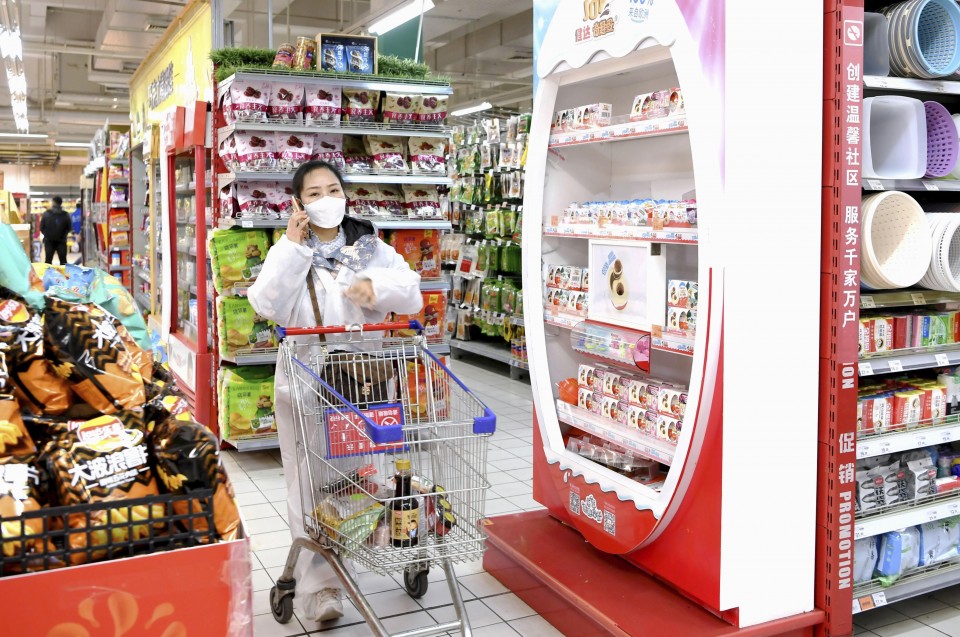 (Supplied photo shows a customer wearing a mask while shopping at a supermarket in Wuhan on March 22, 2020.)

The central government has determined asymptomatic infections as the top national health risk in recent weeks amid mounting public fears that "silent" carriers may trigger further waves of infections as people return to work after lockdowns are relaxed.

Since Jan. 28, China has reported 6,764 asymptomatic cases, the National Health Commission told a press briefing Wednesday, revealing a tally of such cases for the first time.

A total of 1,297 cases later developed symptoms and were re-categorized as "confirmed cases" while 4,444 were discharged after showing no symptoms during their 28-day quarantine, it said, adding that over 1,000 patients remain under observation.

Meanwhile, China on Wednesday reported 103 new coronavirus infections on the mainland, 46 of which involved individuals displaying symptoms with the remainder showing no symptoms.

Imported cases accounted for 39 of the new infection cases, including 36 with symptoms.

The National Health Commission said that with the 46 newly reported symptomatic cases, overall confirmed cases on the mainland now stand at 82,295. With one new death from the disease recorded in Hubei on Tuesday, the death toll has reached 3,342.

So far, almost 95 percent of the country's total COVID-19 patients have recovered from the disease.

But amid rising numbers of local transmission cases as well as cases detected in Chinese who returned from neighboring Russia, the Chinese government has built a makeshift hospital and dispatched medical personnel to Heilongjiang, the northeastern province on the countries' border.

Also on Wednesday, Chinese airlines recorded losses totaling 33.62 billion yuan ($4.8 billion) in the first quarter of this year amid significant declines in passenger numbers brought on by efforts to control the epidemic, an official of the Civil Aviation Administration of China told reporters at a press briefing.

Relevant authorities have already issued a package of preferential policies and financial support to help alleviate some of the strain on the industry, the official said.

Trump orders halt to U.S. funding of WHO over coronavirus response