Prime Minister Shinzo Abe said Monday he plans to declare a state of emergency as early as Tuesday in Tokyo and six other prefectures over the coronavirus outbreak amid emerging signs of widespread infections across Japan.

Abe has faced increasing calls from local governors and doctors to issue a state of emergency due to fears an explosive spike in infections would strain the health care system further.

The declaration, which will be effective until May 6, will cover Tokyo and the neighboring prefectures of Chiba, Kanagawa and Saitama, as well as Osaka, Hyogo and Fukuoka.

"I will issue a state of emergency as early as tomorrow after seeking opinions from the advisory panel," Abe told reporters at the prime minister's office.

"Even if such a declaration is made, we will not implement the kind of a lockdown seen overseas," he said.

Under the Japanese law, citywide lockdowns, as seen in other countries hit hard by the coronavirus like China and France, cannot be enforced. The declaration would still restrict people's freedoms.

Abe is scheduled to hold a press conference to explain his decision at 7 p.m. Tuesday, his office said.

Once a state of emergency is declared, prefectural governors can urge local residents to stay at home and restrict the use of schools and other facilities to prevent the spread of the coronavirus. But people will not be punished if they do not fall into line, and business activity cannot be banned.

The declaration, under a recently amended law, will come as Japan seeks to contain a rapid increase in COVID-19 cases, which poses a significant risk to people's lives and the Japanese economy. 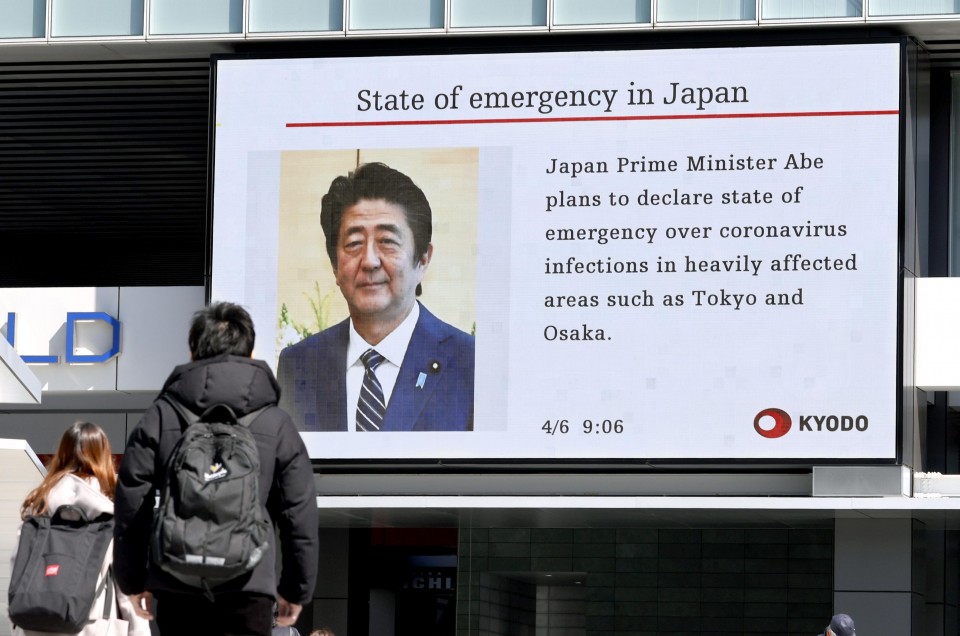 A growing number of cases in which transmission routes cannot be traced have raised the alarm. Abe has warned of an explosive surge if people let down their guard, having conceded that Japan was barely "holding the line" against the virus.

Tokyo Gov. Yuriko Koike and Osaka Gov. Hirofumi Yoshimura have been stepping up calls on Abe to make the declaration, while the Japan Medical Association has also sought the measure.

Before declaring a state of emergency, Abe first needs to consult an advisory panel of medical and public health experts who will determine whether the situation is warranted. He will have to notify parliament in advance.

Arrangements are under way for the panel to meet at 10 a.m. Tuesday, a senior administration official said.

As of Monday, the number of people with coronavirus in Japan surpassed 4,500, including some 700 from the Diamond Princess cruise ship, with 107 deaths reported.

To prevent the health care system from becoming overwhelmed and other widespread impacts, governors of areas subject to the declaration will be able to tell people to only go outside on essential errands such as grocery shopping, or if they are key workers in areas such as health care and public transport.

Governors can restrict the use -- and request temporary closure -- of places where large groups gather such as schools, social welfare facilities, theaters, music venues and sports stadiums.

In the event that hospitals become overrun and new ones need to be quickly set up, as has been the case elsewhere, such as in China and the United States, governors will be able to expropriate private land and buildings if rejected by their owners and users for no legitimate reason.

They can also requisition medical supplies and food from companies that refuse to sell them and punish those that hoard or do not comply. They can force firms to help transport emergency goods.

Abe gained the power to set in motion the process of establishing a state of emergency on March 13, when the Diet passed a revised version of a law enacted in response to the 2009 swine flu pandemic. The revision is effective for two years.

Recent requests by the prime minister for all schools to shut and for large sports and entertainment events to be canceled or postponed to prevent group transmission were made without the legal basis to enforce them.

One reason for the recent surge in infections is believed to be the importation of cases from abroad, prompting the government to implement an entry ban on foreign travelers that have recently been to one or more of 73 countries and regions.

Abe has promised the country's "boldest-ever" stimulus measures to help struggling households and businesses amid the virus epidemic, more than the 56.8 trillion yen ($522 billion) package rolled out during the 2008 global financial crisis.

The government is putting together the stimulus, which will include cash handouts to struggling households, with the possibility of a state of emergency declaration in mind. It may be finalized on Tuesday.

Economists expect that Japan, already reeling from a consumption tax increase last October, fell into recession during the January to March quarter due to the impact of the pandemic.