As China has claimed that the new coronavirus epidemic has peaked within the country, Beijing's battle to contain imported infection cases has confused and frustrated Japanese people who work in the capital.

Aiming to hold the delayed session of China's national parliament in April, Beijing authorities have become more serious about curbing the resurgence of the pneumonia-causing virus outbreak in the city, diplomatic sources said.

The annual meeting of the National People's Congress was originally scheduled to be convened on March 5 in Beijing, but it has been postponed due to the spread of the virus, first detected late last year in the central Chinese city of Wuhan. 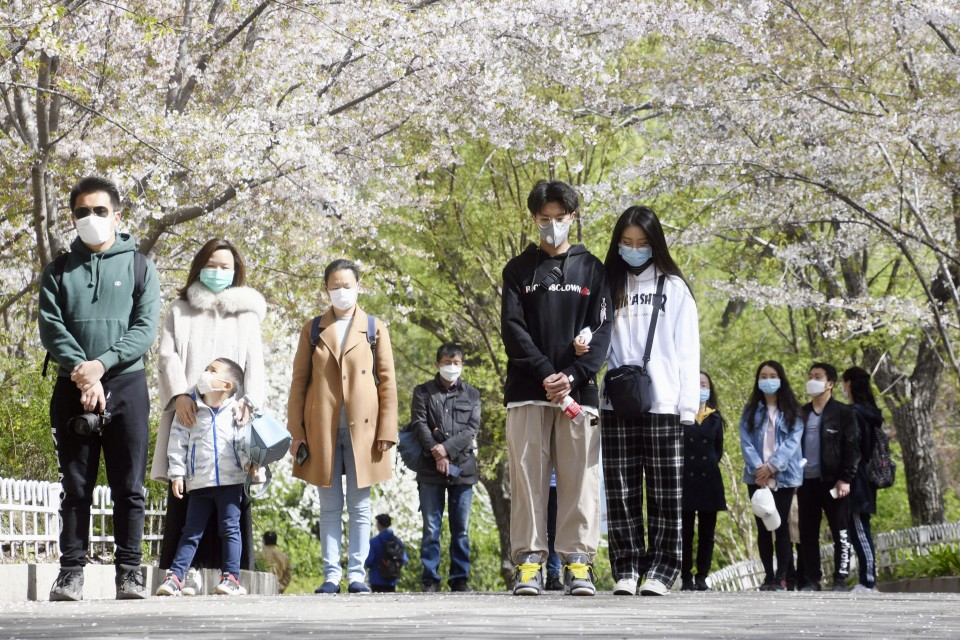 (People pray at a park in Beijing on April 4, 2020, in memory of those who died of pneumonia caused by the new coronavirus.)

On Wednesday, meanwhile, China lifted the months-long lockdown imposed on Wuhan, in a symbolic sign that the Communist-led government is confident in winning the fight against the virus that causes the respiratory disease called COVID-19.

"As the number of new infection cases has been decreasing, the Chinese leadership is apparently eager to convene the National People's Congress by the end of April," one of the sources said.

"To achieve the goal, Beijing is likely to continue taking every possible step to prevent the virus from being carried to the capital by foreigners and returnees. For the time being, we are certain to be swayed by immigration control policies," he added.

Since early February, the total number of infected patients in Beijing has risen to around 600 from about 150, but more than 170 cases have been imported from other nations, health authorities said.

Late last month, the Chinese Foreign Ministry abruptly announced that on a temporary basis it would not allow foreigners to enter the country beginning March 28. The measure has applied even to those who hold a valid visa or residence permit.

"It was a very sudden notification. Six out of my nine colleagues returned to Japan to seek refuge from the virus in late January and now cannot come back to China," said a female worker at a Japanese government-backed organization in Beijing. 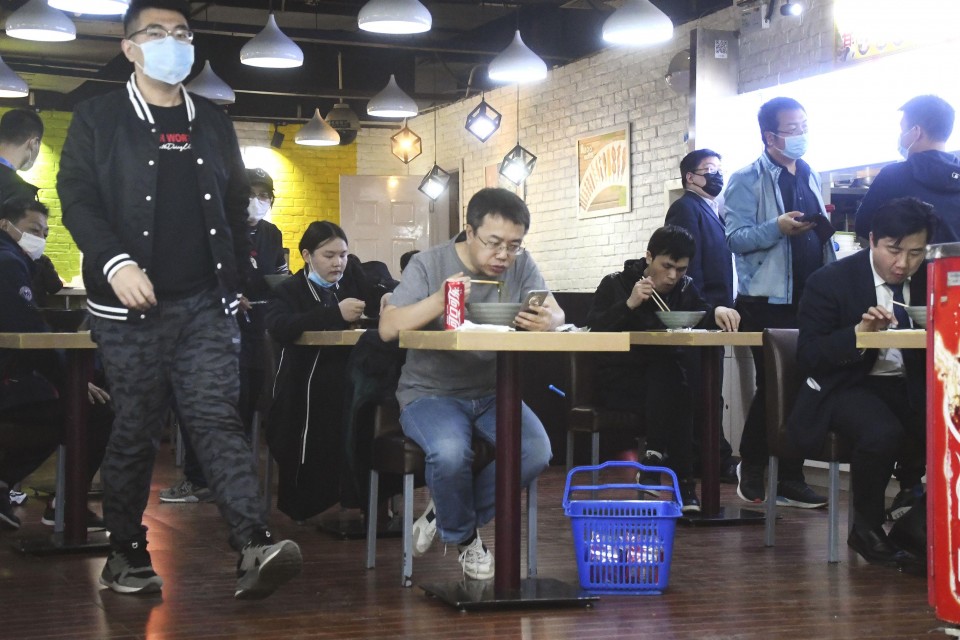 (People sit at a distance at a food court in Beijing.)

"We don't know when the entry ban will be removed. A lack of personnel has interfered with our daily routine," she added.

A major Japanese trading house has resumed normal operations of its Beijing bureau since early March, but only Chinese staff members have been working inside the office as Japanese employees have been stranded in their home nation.

"I hope China will lift the entry ban of visa-holding Japanese immediately following the end of the postponed National People's Congress, probably in late April or early May," one of the workers of the trading company said.

But even if such Japanese expatriates return to Beijing after immigration restrictions ease, they are expected to be quarantined for two weeks upon arrival as instructed by the municipal government.

Since early last month, Beijing authorities have required a 14-day isolation for anyone entering the city from Japan, saying infections have been seriously expanding in the country. 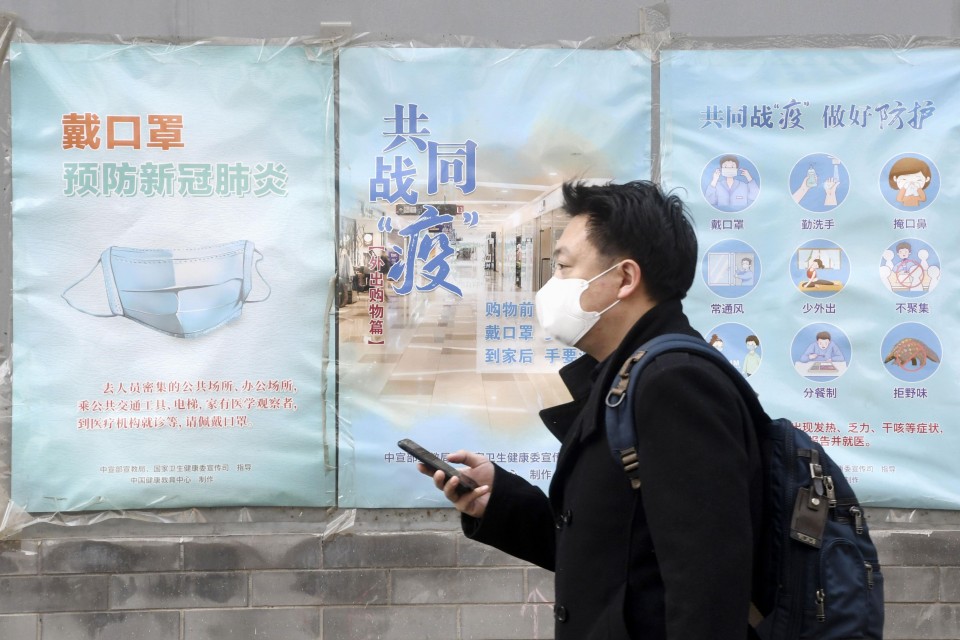 (Posters seen on a street in Beijing tell pedestrians what to do to avoid being infected with the new coronavirus.)

Recently, all the people reaching Beijing from other areas in China -- whether Chinese citizens or foreigners living in the nation -- have been also obliged to be quarantined for two weeks at their home or some designated facility like a hotel.

A Japanese employee, who was back in Beijing on March 15 and experienced the 14-day isolation at his apartment, told Kyodo News, "I was prohibited from stepping out of my room. I was strictly monitored by administrators of my residential district."

"When I arrived in Beijing, the airport was full to overflowing as many Chinese rushed to return home from abroad, believing Beijing is safer than other countries. I thought I would be infected with the new coronavirus because of close contact."

As he had to have a health interview and go through several procedures to enter Beijing, it took more than eight hours to get to his apartment from the airport.

During the quarantine period, he spent time mostly working, reading books, playing online games and watching the television. As delivery services using smartphone apps have been widely embraced in China, "I did not have trouble buying daily necessities," he said.

An apartment concierge received food products or other goods from a driver and put them in front of the door of his room. While told by administrators not to have contact with others for two weeks, he had to report his temperature to the district every day.

"I was not able to even take a walk around the neighborhood and meet friends, adding to my stress. In addition, whenever I checked my temperature, I was strongly worried about what would happen if I would be stricken with pneumonia or other diseases under quarantine."

"In such a stress-laden environment, it was extremely difficult to concentrate on work at home. If I had been sent to a designated facility, I would have been mentally exhausted and it would have taken long time until my life returned to normal," he said.

One day after he was back in Beijing, the local government began quarantining all travelers arriving in the capital from overseas at designated facilities for 14 days at their own expense, unless there is a special reason.

"Even though Beijing removes the entry ban in the near future, it may continue to implement the same quarantine measure to control the movement of foreigners," he said.

"Some of my Japanese friends have expressed optimism that they can return to Beijing after the end of the National People's Congress, but I recommend they should stay in Japan for a while unless they have an urgent task here," he added.