Prime Minister Shinzo Abe suggested Wednesday he will consider pushing back the start of the academic year to September from April as the novel coronavirus outbreak in Japan has forced schools to shut.

Abe said that since Japan is undergoing a change of such major magnitude, "I would like to consider various options," referring to a September start of the academic year.

Speaking at a House of Representatives session, he also acknowledged the change would greatly affect not just children and their parents but society as a whole. 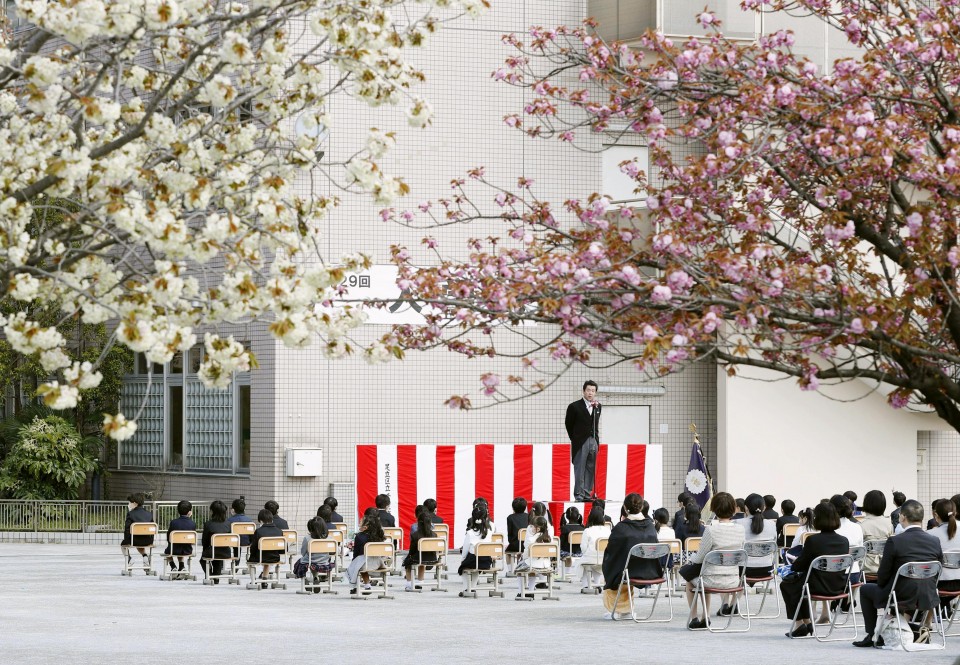 (An enrollment ceremony for new students is held at the playground of Senju Sakura elementary school in Tokyo on April 6, 2020, amid concerns over the new coronavirus. Such a ceremony is usually held indoors in Japan.)

Japan's academic year starts in April, while a September start is common in many other countries. Many schools across Japan closed after the government requested them to do so on Feb. 27 and they are expected to remain closed through May 6, the end of the state of emergency, or even longer.

Education minister Koichi Hagiuda backed up line Abe's view regarding the September start, saying it would be an option if it gains wide public support.

Hagiuda also indicated that state and local governments should jointly take responsibility if they were to introduce a new academic year system.

Tokyo Gov. Yuriko Koike on Tuesday expressed support for the September start of an academic year, saying "following international standards is a part of education."

"If the new semester starts in September, kindergarten, elementary schools, junior and senior high schools and job hunting will change," she said. "It will be a chance to change society greatly."

As the country continues to see a growing number of people infected with the pneumonia-causing virus, Abe on Wednesday did not rule out amending the special measures law against the novel coronavirus.

"We have to think of new responses if the (outbreak) cannot be contained under the current measures and legislation," he told the lower house Budget Committee.

The prime minister said social distancing had played a role but the reduction in person-to-person contact has not reached 80 percent as the government has requested.

As of Tuesday, Japan had more than 14,300 people infected with the coronavirus.