Ronald Regang is still haunted by his involvement in the bloody sectarian conflict between Muslims and Christians on the eastern Indonesian island of Ambon. 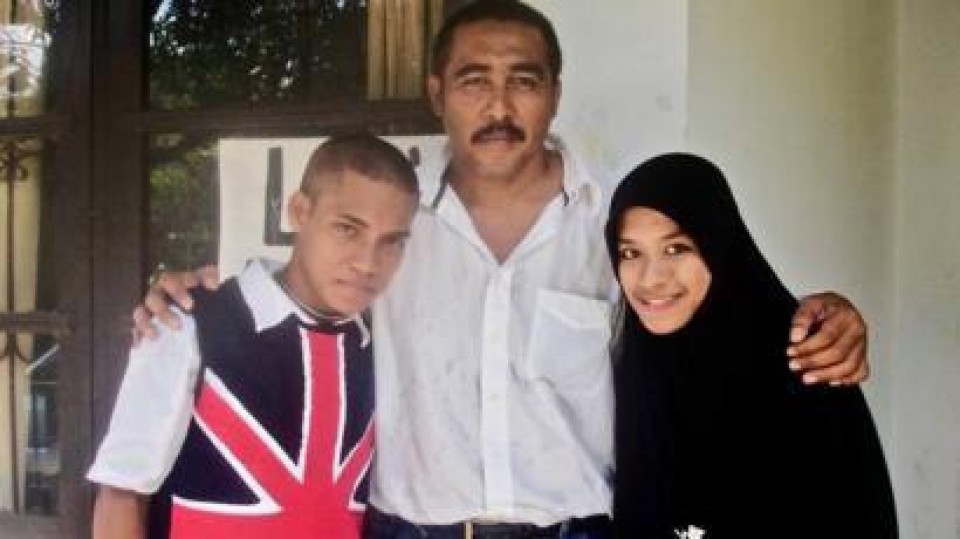 (Ronald Regang, left, poses for a photo with Reverend Jacky Manuputty, center, and Dahlia Talo before leaving for the Philippines to participate in a youth interfaith dialogue in 2006.)[Courtesy of Ronald Regang]

"What I regret the most about being involved in the conflict was that I killed many people," he said. "I feel so stupid to have once thought it was a religious war, a holy war...It was all nonsense."

Being just 10 years old when he joined made him one of the youngest among the Christian child soldiers.

Despite his tender age, Regang said he used homemade bombs, guns and machete to fight Muslims, adding that he lost count of how many people he killed in the conflict.

"We did not have an option at that time. It was either kill or be killed," he recounted.

The conflict led to Regang being separated from his family for nearly two years and robbed him of his childhood.

"If a time machine existed, I would fix everything so there was no riot. Our times were too dark. It was so painful," he said.

When the conflict ended with a peace deal in 2002, Regang and other former child soldiers had no idea where to go. They were no longer respected or admired. People blamed them for destroying Ambon.

Regang said he is lucky to have met Rev. Jacky Manuputty.

In 2004, Manuputty visited Regang at his home and asked him to participate in a deradicalization program outside Ambon.

Regang, who used not to trust anyone, was suspicious of the reverend at that time. Manuputty subsequently visited Regang many times, never failing to tell the troubled youth that he had a long future ahead.

Finally persuaded to participate in the program with the help of his older sister, Regang went to Yogyakarta, a city on the main island of Java. It was the first time for him to leave the Maluku islet group to which Ambon belongs.

There he met child psychologists and Muslim children who were victims of other conflicts in Indonesia, including in Aceh, Indonesia's westernmost province on Sumatra Island.

Regang said Yogyakarta was like "a new world" for him, but also disorienting because it was "so peaceful."

From Yogyakarta, Regang went to the capital Jakarta accompanied by Manuputty to attend a two-month trauma healing session.

In 2006, Regang and children from across Southeast Asia participated in a youth interfaith dialogue in the Philippines that opposed children's involvement in war and aimed to promote young people's participation in peace-building.

Through his participation in these activities, something gradually changed within him. 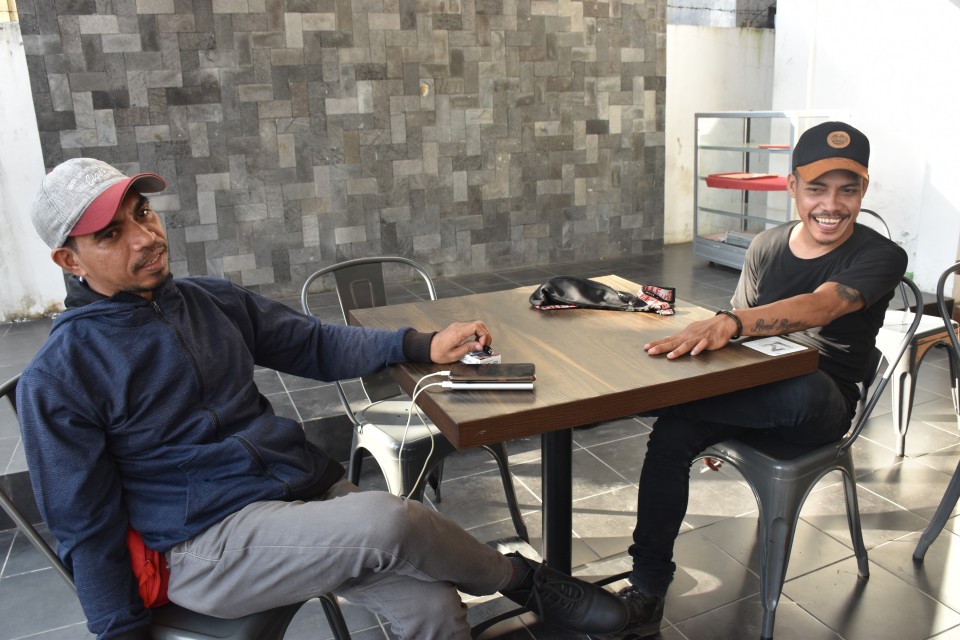 Regang's experience echoes that of Iskandar Slameth, a 35-year-old Muslim who was a child jihadi in Ambon. He started fighting when he was 14.

"I was a person who despised Christians. I really hated them because they made my brother suffer a severe leg injury," Slameth said.

Slameth said he was trained not by the military but by "mujahideen" from the Middle East. "There was no kind of weapon I could not use. I have used them all."

But Slameth felt trapped and stressed as the Muslim-dominated area he lived in was just a few kilometers wide.

"I was afraid to move. If I move to a Christian area, would I be shot, would I be killed?" he recalled thinking.

Slameth started selling and using drugs and hanging out at night.

Regang and Slameth, who fought on the frontlines during the conflict, both participated in Young Ambassadors for Peace, a trauma healing workshop for child soldiers held in Ambon in 2007.

The workshop drew 20 Muslims and 20 Christians who had been victims of conflict in different parts of Indonesia.

On the first day of the workshop, still suspicious of each other, they just stared at each other without saying a word.

Regang said that when he found out that Slameth was a Muslim and the commander of a "mini-jihadi" group, they got into a fight and nearly killed each other.

Luckily, a supervisor intervened and separated them, Regang said.

Their presence was meant to demonstrate to participants that a Muslim and a Christian can be friends and build mutual trust.

To help the two groups understand each other better, organizers arranged for two Muslims and two Christians to share each bedroom.

Regang and Slameth were assigned to the same bedroom and spent days taking turns telling their stories.

At one point during the workshop, Regang asked those present to forgive his mistakes. "I love you all," he said, bursting into tears in front of all participants.

"It made us cry," Slameth recalled. 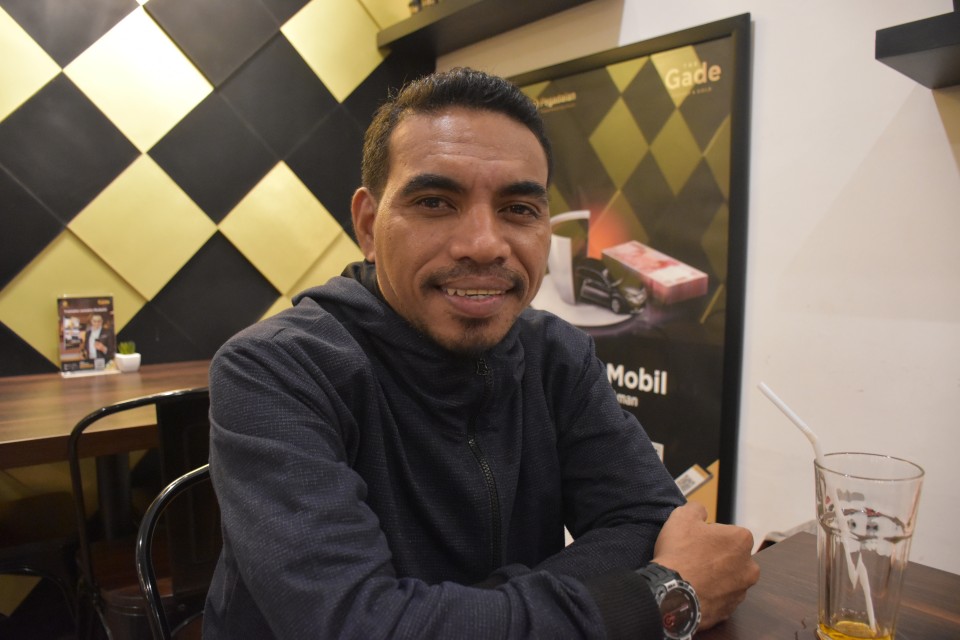 (Iskandar Slameth poses for a photo during an interview with Kyodo News in Ambon, Indonesia, on Feb. 13, 2020.)

It was a watershed moment that made both men realize that they faced the same problems and had to communicate with each other better, Regang said.

The two men are now friends and maintain ties as "peace provocateurs."

To pay off his "debt" of the past, Regang enrolled in a nursing college. "I want to save many lives," he said.

They, along with other youths in Ambon have built a community of young people to showcase their talent. People are invited to dance, paint and recite poems.

Regang, an avid dancer, teaches children in a Muslim area. Other participants have visited Muslims to build mutual trust.

Through their activities, "we keep on spreading a peace virus," Regang said.

Regang and Slameth both voiced hope that the conflict has ended once and for all during their generation.

"Do not glorify violence in the name of religion, ethnicity, race or a certain group. Once it happens, women and children would become the victims," Regang said.

"For those young people who live out there, if you can learn anything from the Maluku conflict, it was not something fun," said Slameth, adding it is far better to live in peace and love each other. 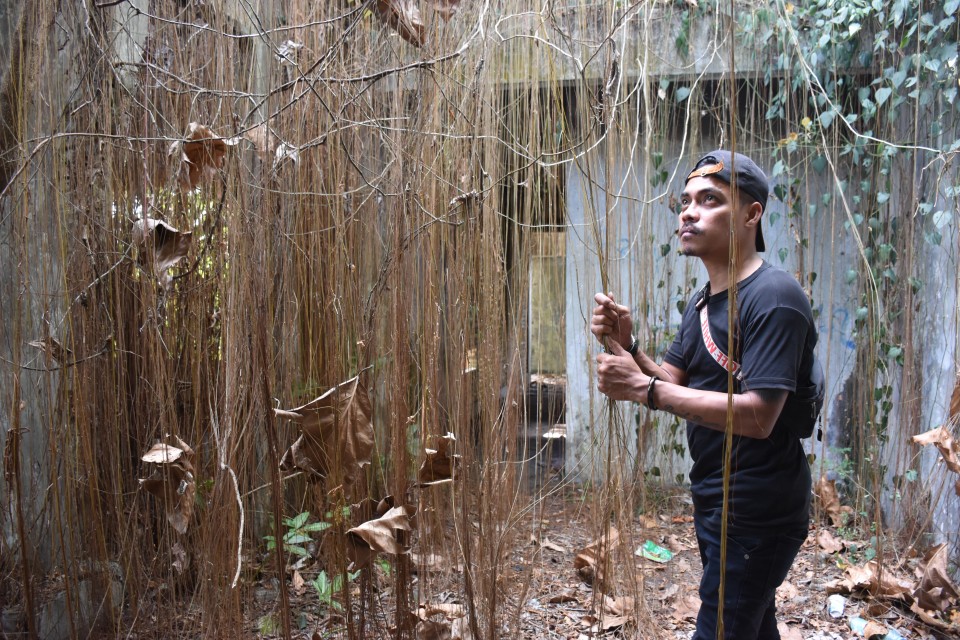 (Ronald Regang is pictured on Feb. 12, 2020, at a house that was burned during conflict in Ambon, Indonesia.)