Tokyo's Toyosu fish market, which opened in 2018 to replace the aging Tsukiji market, is facing tough times with both trade volume and prices of high-end fish and other marine products tumbling as demand collapses amid the coronavirus pandemic.

The wholesale market is famous for its tuna auctions, but trade in the fish has roughly halved in volume from a year earlier amid sharp declines in the number of customers at restaurants, especially foreign tourists, according to the operator.

Most of the seafood at the Toyosu market is snapped up by professional buyers supplying customers such as upscale sushi restaurants but amid the current market conditions, some unsold products end up being sold online to members of the public at discount prices.

"Fish prices are down and we have no customers. Our business is almost dying," said Masaru Harada, 53, president of the intermediate wholesaler Dairiki Shoten, which has a shop inside the Toyosu market. 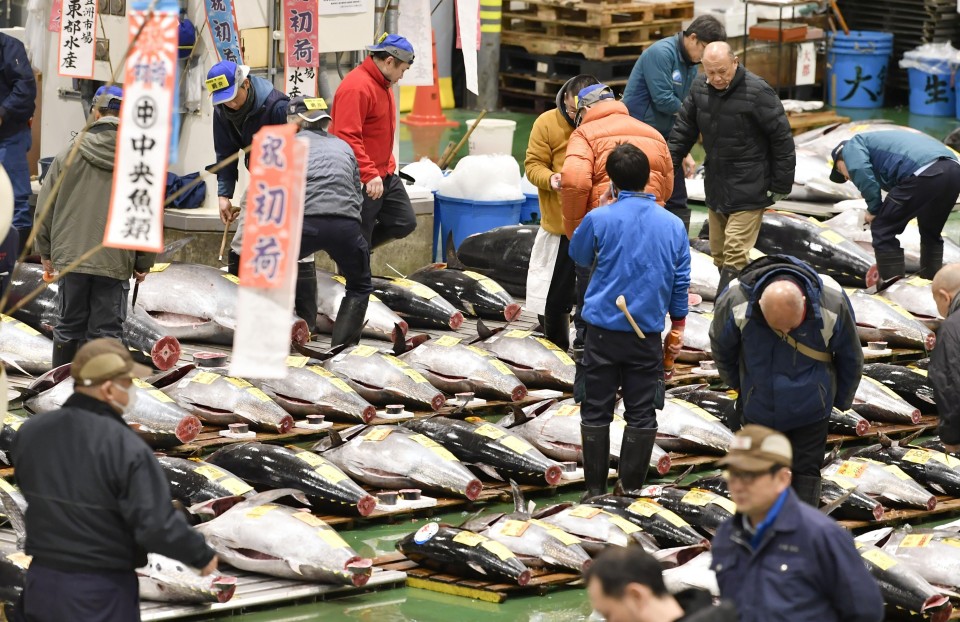 (Tuna are lined up for the year's first auction at Tokyo's Toyosu fish market on Jan. 5, 2020)

Over 210,000 hotel rooms secured to treat coronavirus patients in Japan

Dairiki trades 50 to 60 expensive marine products such as cherry bass for its customers including sushi and seafood restaurants in Tokyo's posh Ginza and Akasaka districts, but a number of transactions have been canceled since around March due to the impact of the pneumonia-causing virus in the country.

The company is limiting the work hours of its 15 employees to survive the hardship but its sales have plunged by about 80 percent, it said.

Its overseas customers have also decreased and are now only in Hong Kong. The company said it is considering applying for loans in anticipation of the situation getting worse.

"This is our biggest crisis, and we can't foresee the future. We have to overcome it by uniting as team Dairiki," said Harada.

According to a weekly trading report by the Toyosu market for the seven-day period from April 10, daily trade volume for fresh fish plunged about 30 percent from a year earlier to 469 tons. Volume for tuna halved to 19.7 tons.

The wholesale price of tuna caught by Japanese boats dived about 70 percent from a year earlier to 2,910 yen ($27) per kilogram on average.

Due to the influence of the pandemic, tourists have been barred from entering the Toyosu market since late February, with restaurants and shops there only accepting market workers.

Its tuna auctions were once popular attractions for visitors.

Meanwhile, some online sales sites with logistics bases in the Toyosu market have started selling items unsold to professional buyers such as sea urchin and salmon eggs for general customers at discount prices.

Akifumi Hagiwara, the 58-year-old president of an operator of online sales website Umaimon.com, said his company has seen a 10-fold increase in daily sales lately.

"Best seafood is brought to the Toyosu market from around the world. We would like to support producers by selling items that were not sold in the market," Hagiwara said.