A hotel in central Tokyo started accepting novel coronavirus patients with mild or no symptoms Tuesday as the metropolitan government seeks to hospitalize only the seriously ill to ease the strain on the health care system.

The hotel, Toyoko Inn Tokyo-eki Shin-ohashi Mae and which has been rented by the Tokyo government, can host some 100 people who are infected with the pneumonia-causing virus, but only those whose body temperature has been lower than 37.5 C in the last 24 hours.

With more than 1,100 people found to have been infected with the virus by Tuesday, Tokyo Gov. Yuriko Koike said her government plans to rent more hotels to secure about 1,000 rooms and leave hospital beds for those in serious condition. 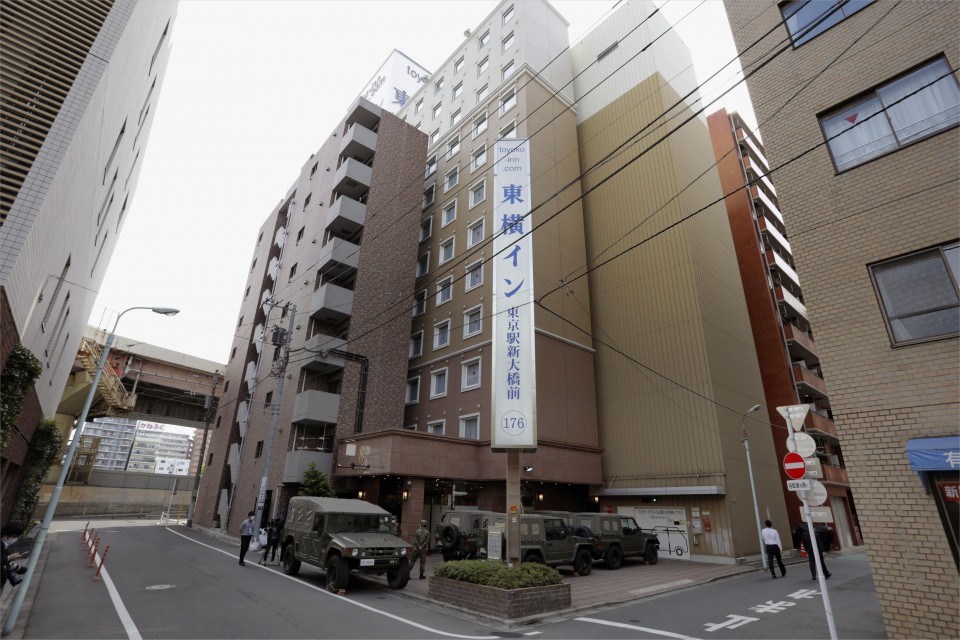 (Photo taken April 7, 2020, shows Toyoko Inn Tokyo-eki Shin-ohashi Mae, a hotel in central Tokyo to which the capital plans to move coronavirus patients who are asymptomatic or have mild conditions from hospitals.)

A van to transport patients arrived at the hotel near Tokyo Station in the afternoon. Two people got out of the vehicle and took their luggage into the hotel. The driver was wearing a white protective suit.

In the morning, members of the Ground Self-Defense Force were seen taking supplies to the hotel as the facility was unveiled to the media.

"We'd like to help so we can monitor the health (of the patients) and make their stay as comfortable as possible," said Kaori Okamoto, a Tokyo government official in charge of the preparations.

Doctors will be at the hotel during the day, while Tokyo officials and nurses will work there around the clock. The officials and patients will use separate elevators and routes to avoid contact, according to the Tokyo government.

The Tokyo government said it will shoulder the costs of the patients' transportation, meals and stay.

Last week, the Japan Medical Association warned of a possible health care system collapse as the number of people with the virus continued to grow.

A nursing care facility in Tokyo's Ota Ward, where a dozen people were found to be infected with the virus, said eight with mild symptoms had to remain at the facility temporarily as it could not find a hospital to accept them.