Wearing face masks to fight the coronavirus outbreak has become increasingly prevalent in the United States and Europe after they saw relatively slow rises in infection numbers in Japan and South Korea, where people routinely put on masks in winter to prevent diseases, health experts say.

U.S. President Donald Trump said Friday that Americans are advised to wear cloth masks or face coverings in public as a voluntary measure to help blunt the spread of the virus, although he said he will not do so himself. 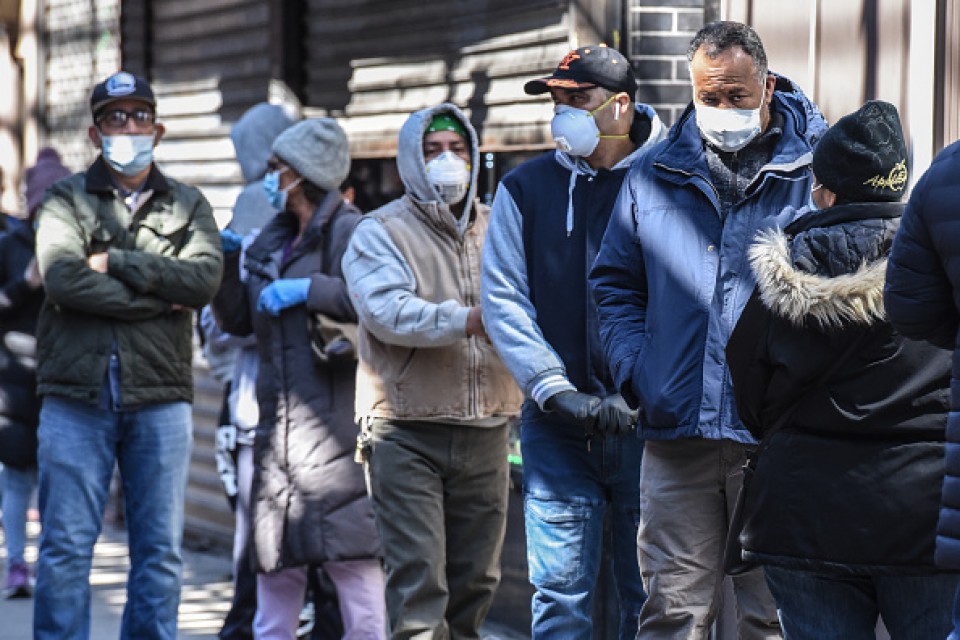 (People stand in line while wearing face masks in the Elmhurst neighborhood on April 1, 2020 in New York City.)[Getty/Kyodo]

The number of confirmed cases in the United States stood at 74 on March 1 before exploding to over 180,000 at the end of last month, according to a tally by Johns Hopkins University. That compares with eight-time and three-time increases in Japan and South Korea, respectively.

In Europe, the number of infections grew over 1,000 times in Spain during the same period and 60 times in Italy.

A handful of countries in the region have made wearing masks mandatory such as the Czech Republic and Slovakia, while Austria made it mandatory when inside a supermarket from April onward. Germany has also been advising people to actively use them.

The sharply rising infections in Western countries are believed to be a result of their greeting practices not common in Japan or South Korea such as kissing and hugging. The World Health Organization and the U.S. Centers for Disease Control and Prevention were initially skeptical about the effectiveness of using masks other than types used for medical purposes.

But experts soon voiced the necessity of face masks as reports of asymptomatic cases surged in many countries.

The CDC recommended the use of masks following studies showing that the virus becomes infectious 48 hours before the patient shows symptoms, and that up to 25 percent of coronavirus cases could be asymptomatic.

Meanwhile, Trump expressed his intention to not wear a mask, saying the guidance is "not mandatory" and that "(the CDC) suggests you can wear them, or don't have to wear them."

At the same time, however, the spread of the virus across more than 180 countries and regions has also led to a global mask shortage. Some of them have imposed a purchase ban for personal usage to prioritize health care practitioners while others have limited exports of masks to meet domestic demand first.