Prime Minister Shinzo Abe is desperate to strike the right note over his oft-criticized coronavirus response, hoping to stem both growing infections and faltering public support.

But the more he does, the more he seems to flail, with his recent efforts to reach out to a wary public backfiring badly.

Then came a jolt from within, as Komeito piled pressure on him to accept its plan to provide 100,000 yen ($930) to all citizens, reportedly using the threat to break up its coalition of some 20 years with the Liberal Democratic Party as leverage. Abe had to give in.

The sudden declaration of a nationwide state of emergency on Thursday and the last-minute reworking of a draft budget to realize the cash handout plan baffled members of the ruling LDP and angered opposition lawmakers.

Facing reporters in a televised press conference, an apologetic Abe said the responsibility lies with him for causing "confusion."

"There may have been shortcomings, but I've been doing everything I can," Abe said. "I will continue to do my utmost."

Just as Abe extended the state of emergency to all 47 prefectures, the number of coronavirus infections topped 10,000 in Japan, adding to fears that an explosive surge by the virus will put additional strain on hospitals and the medical system, generally.

It was the perfect timing for Abe, who had been skeptical about a blanket cash handout, to do an about-face. In a government task force meeting on the coronavirus response, Abe underlined the need to pay 100,000 yen per person to all those affected by the declaration.

After taking flak over the Abenomask program, a response to shortages of disposable face masks in stores, the posting of a video on social media only dumped fuel on the flames of anti-Abe discontent.

The video of Abe cuddling his dog and sipping from a teacup rubbed many the wrong way. He was trying to encourage people to stay at home to reduce coronavirus transmission in the community, but the post fell flat. 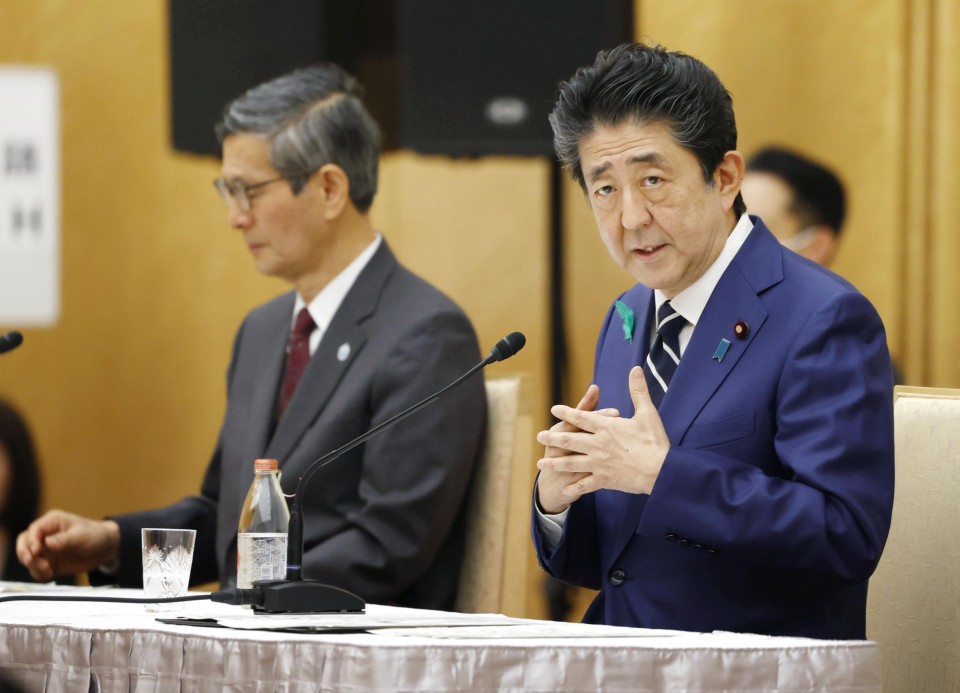 (Prime Minister Shinzo Abe speaks at a press conference in Tokyo on April 17, 2020.)

Since early in 2020, Abe has faced a tough battle against the coronavirus. The handling of the virus-hit Diamond Princess cruise ship that was quarantined near Tokyo in February was criticized both at home and abroad, and his abrupt request for school closures stunned working parents.

The prime minister's state of emergency declaration for urban areas on April 7 was deemed too late by governors who had been calling for faster action. Many people apparently shared the same view, with over 80 percent of respondents in a recent Kyodo News poll saying Abe's reaction was too late.

The disapproval rate for Abe's Cabinet, at 43 percent, was higher than the approval rate, 40.4 percent, for the first time since mid-February.

Public opinion about Abe was not improved by his handling of the postponement of the Olympic and Paralympic Games in late March.

There was a sense of inevitability that the games were going to be disrupted for some time before International Olympic Committee President Thomas Bach and Abe made the announcement, and speculation was rife that the country's coronavirus response was in some way influenced by its hope to hold the games as planned.

What is sure is that the hoped-for economic boost the games are expected to bring to Japan will now come later, if at all, giving Abe yet another coronavirus-caused headache.

"Mr. Abe is trying to do what's good for the public but there is a huge perception gap between him and ordinary people (in terms of what's needed during the coronavirus crisis)," said Masahiro Iwasaki, a political science professor at Nihon University.

Opposition lawmakers are seeking to seize on Abe's perceived mismanagement of the situation to step up their attacks.

"The government's response is off the mark," said Yoshitaka Saito, a lawmaker from the Constitutional Democratic Party of Japan.

"If the government tries to use the expanded emergency declaration as a rationale for reworking the extra budget, this is unacceptable," he said in parliament as economic revitalization minister Yasutoshi Nishimura explained the reason for expanding the emergency declaration beyond Tokyo and six other prefectures.

Abe explained that the state of emergency had to be expanded ahead of the Golden Week holidays, to stop people who would normally visit family or take a break away from their home city from doing so.

Now that all prefectures are encompassed, the logic goes, all affected people should receive money and thus changing the budget plan is necessary.

But political observers say the pressure Komeito leader Natsuo Yamaguchi put on Abe to make a different decision about the stimulus payments was a wake-up call. Yamaguchi cut a determined figure when he visited Abe at the prime minister's office.

"People are in trouble, unsure about the future. It's important to send a clear message of unity and encouragement," Yamaguchi said after meeting with Abe.

The Komeito leader pressed Abe to make up his mind and distribute 100,000 yen per person during the face-to-face meeting and over the phone, hinting that Komeito may be prepared to leave the coalition, a government source said.

The breakup of the LDP-Komeito coalition would be seismic, if unrealistic. If Abe's LDP wants to amend the Constitution for the first time since it took effect in 1947, its coalition partner's support is crucial.

"It's like a revolt from the inside," one opposition lawmaker said.

As Abe braces for what could be a prolonged battle against the coronavirus, he may have to take more heed of opinions of the public and Komeito.

"Mr. Abe needs Komeito if he is serious about revising the Constitution and Komeito needs the LDP to have its ideas reflected in government policies so they are inseparable," Iwasaki of Nihon University said.

"Komeito was more responsive to the needs of ordinary people (over the cash handout plan) and this tipped the balance of the coalition," Iwasaki said.