Nippon Professional Baseball is unlikely to alter its plans for a new schedule in response to Japanese Prime Minister Shinzo Abe's declaration Tuesday of a state of emergency to curb the spread of the new coronavirus, NPB Secretary General Atsushi Ihara said.

Ihara said Japan's pro baseball establishment would still aim to announce its modified schedule for the Central and Pacific leagues between the end of this month and early May following the emergency declaration covering Tokyo, Osaka and five other prefectures.

NPB anticipated the declaration, effective through May 6, and had discussed its likely ramifications at a meeting of executives from all 12 teams on Friday, Ihara said.

"(The declaration) covers the timeframe we had expected, so there is no need to specifically alter any of our planning," he said. 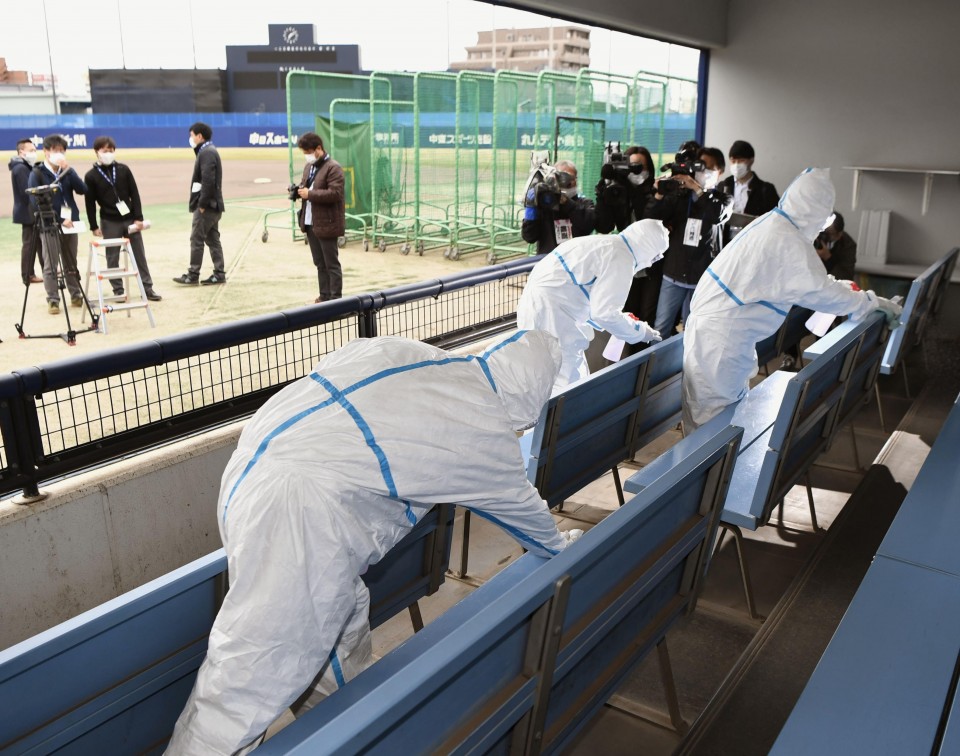 (Nagoya Stadium, home to the Chunichi Dragons baseball club's farm team, is disinfected in Nagoya, central Japan, on March 30, 2020, after Hanshin Tigers outfielder Hayata Ito, who played at the stadium earlier in the month, was found to have been infected with the new coronavirus.)

The emergency declaration nevertheless poses a challenge to teams, which will each decide how to proceed with their preparations. Some have scheduled individual practice for players to adhere to social distancing guidelines, while others have suspended activities for the time being.

NPB said Friday it had abandoned plans to hold opening day for the two leagues in April. It had twice previously set dates, April 10 and April 24, that would allow a regular 143-game schedule, but refrained from such an announcement at Friday's meeting.

Both leagues were originally slated to open play on March 20 after playing most of their preseason exhibitions behind closed doors on account of the coronavirus outbreak.

NPB Commissioner Atsushi Saito said Tuesday the Japanese baseball establishment remains determined to take the field this year despite the unprecedented interruption brought about by the health crisis.

"We will work together with all of our fans to overcome these challenges and strive to once again showcase our national sport," Saito said.