At least 97 new coronavirus infections were confirmed in Tokyo on Thursday, the biggest daily increase yet, the metropolitan government said, as the capital struggles with a recent surge in the number of cases.

The figure follows 66 reported on Wednesday and 78 on Tuesday, and brought the total number of confirmed cases in Tokyo to 684, raising pressure for Prime Minister Shinzo Abe to declare a state of emergency to curb the rapid spread of the virus.

Across the nation, 277 people were newly found as positive for the virus, also a single-day record. It brings the nation's total confirmed cases to 3,482, including about 700 from the Diamond Princess, a cruise ship that was quarantined earlier this year near Tokyo.

None of the 97 newly infected people are in serious condition. Only one person had been abroad recently and 33 have untraceable transmission routes. Seventy percent of those infected are in their 20s to 50s, the city said.

As Tokyo continues to see double digit increases in its daily cases, which include those at Eiju General Hospital where seven people died from the COVID-19 disease, Gov. Yuriko Koike has warned residents the city is facing a serious crisis where the number of infections could explode.

She has repeatedly asked residents since last week to refrain from non-essential outings especially at night and during weekends, pointing out at Monday's press conference that many of the infected people had been in nightclubs, bars or hostess clubs.

She has also urged residents to work from home.

Requests to stay home or not to travel to Tokyo have been issued in areas near the capital, including Kanagawa, Saitama and Chiba prefectures, as well as in other parts of Japan.

Japan currently has confirmed over 3,200 cases including about 700 from the Diamond Princess, a cruise ship that was quarantined earlier this year near Tokyo.

Abe said earlier Thursday that new coronavirus infections across Japan have not reached a point warranting the declaration of a state of emergency, but the country should remain vigilant against an explosive surge.

"At this point, we have not seen infections spreading rapidly and widely across the country. We are just about holding the line," Abe said in parliament.

"But if we lower our guard now even a little, infections could accelerate suddenly at any moment. We continue to be on the brink," Abe said.

Abe has been cautious about declaring a state of emergency in Japan, saying that doing so would restrict people's rights, and first he needs to seek expert opinions. 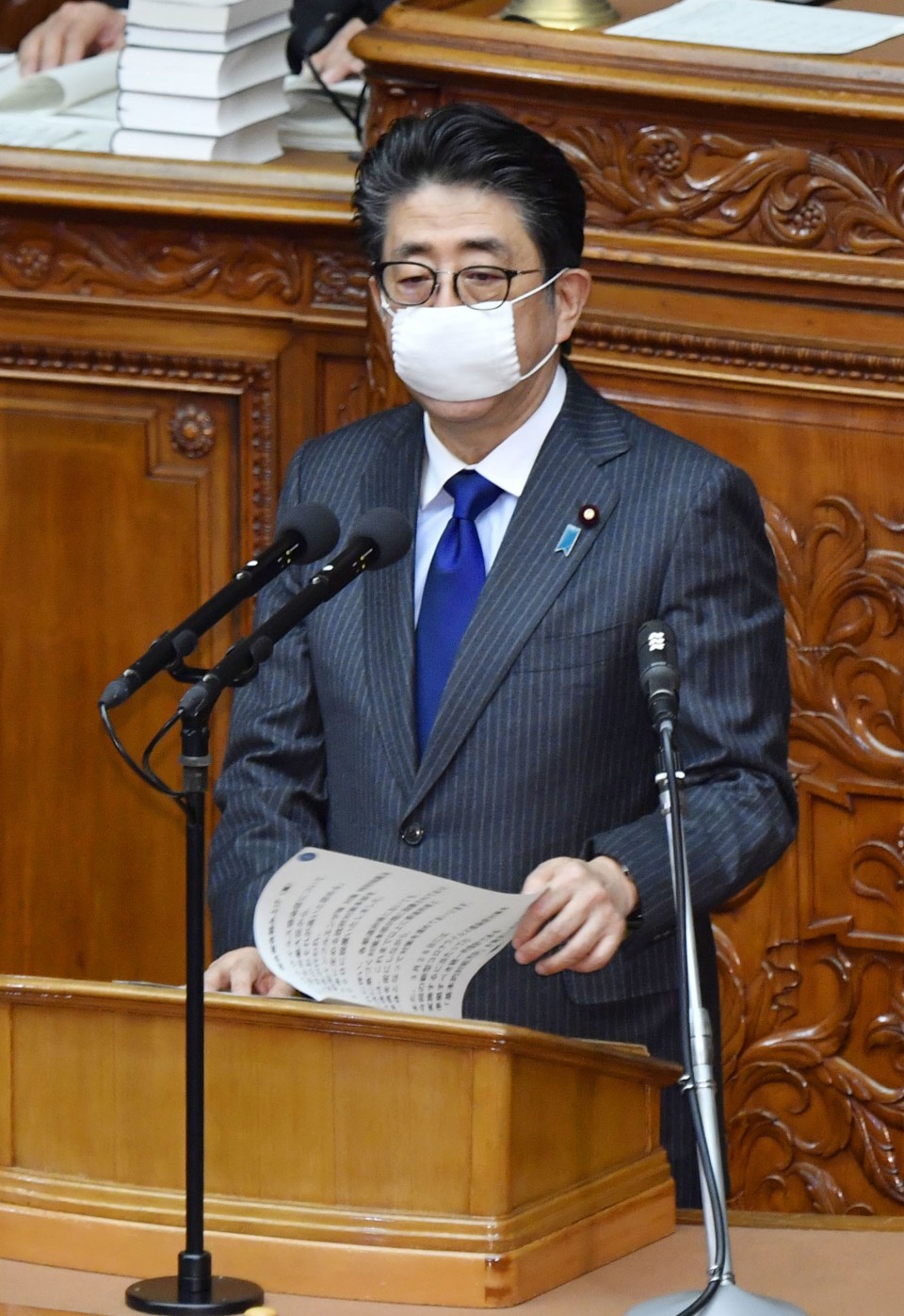 Abe mulls canceling trip to Moscow in May amid coronavirus spread

Japan to give cloth face masks to 50 mil. households to fight virus

Medical experts are calling for Abe to declare a state of emergency to avert the collapse of the health care system due to a potential surge in patients with COVID-19, the illness caused by the new virus that has spread rapidly from China since late last year.

"It's critically important to prevent a sharp rise in cases in the Tokyo metropolitan area with a large population, which is at the center of economic activity," Abe said.

A government panel of experts said Wednesday that the health care system in urban areas, including Tokyo, is under increased strain, and steps need to be taken.

The number of daily infection cases hit another record-high in Tokyo on Thursday with 97 reported. The update brought the total to over 680, by far the largest among the country's 47 prefectures. Nearly 14 million people live in the Japanese capital.

"It's our urgent task to make sure hospitals can provide medical care to patients with severe symptoms even when the number of cases spikes," Abe said.

As the government is stepping up work to formulate an extra budget for fiscal 2020 starting from April, Abe said one pillar would be to secure funding to prepare the health care system for an explosive surge in patients.

The rare budget compilation at the very start of the new fiscal year comes as the government plans to unveil what Abe has termed its "boldest-ever" stimulus package next week with its primary focus on households and small businesses.

Earlier in the day, economy revitalization minister Yasutoshi Nishimura said the package will include government aid to boost the output of life support machines for patients with severe symptoms.

Such equipment, known as extracorporeal membrane oxygenation, or ECMO, replaces the functions of the heart and lungs.

Once a state of emergency is declared for specific areas, prefectural governors will gain the discretion to take preventive steps. They can request residents to stay home and limit the use of schools and other facilities. The expropriation of private land and facilities would be allowed to provide emergency medical care.

The prefectural government in Osaka, another urban area with a growing number of infections, decided on a set of steps it would take if an emergency declaration is made by the prime minister.

Its governor would make a request to limit the use of day-care centers, kindergartens and schools and ask people to avoid non-essential outings.