Doctors in Europe and the United States have been reporting an increase in cases of children who have developed Kawasaki disease or symptoms similar to the rare inflammatory syndrome, with concerns raised over a possible link to the new coronavirus, according to local media reports.

The scientific community and national authorities are unsure as to whether the acute febrile illness, which primarily affects children under four, was triggered by COVID-19, and will remain vigilant in monitoring it.

Kawasaki disease, the cause of which is unknown and which is usually seen in Asia, is associated with irritation and redness of the whites of the eyes, swollen tongues, skin rashes, and fever.

It can limit blood flow to the heart and cause vascular inflammation as well as myocardial infarction. It is usually treatable but could also be fatal. 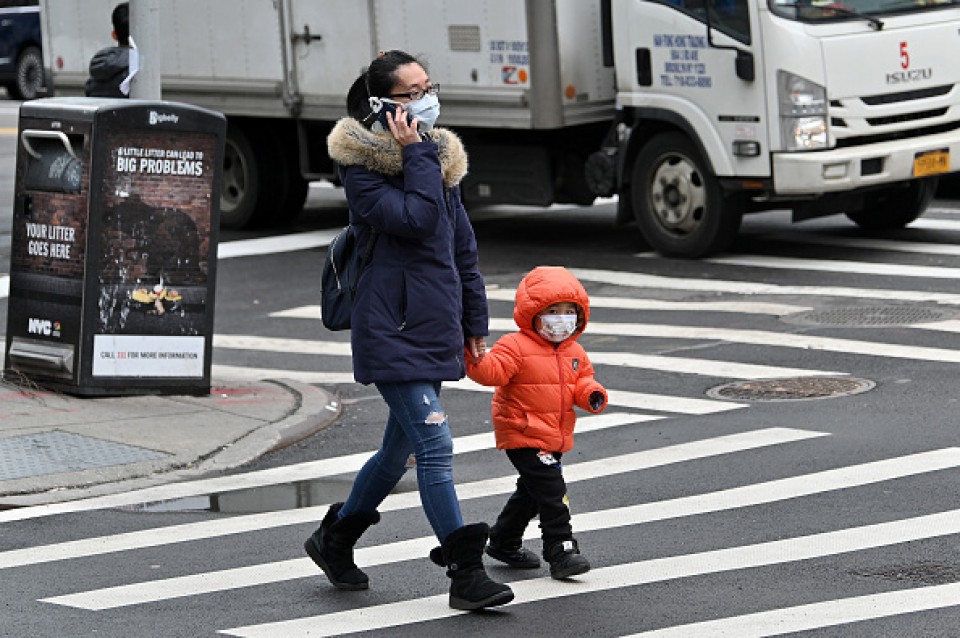 (A woman and child wearing protective masks are seen crossing the street in Manhattan's Chinatown in New York on March 19, 2020.)
[Getty/Kyodo]

In Britain, around 20 children have been identified with the Kawasaki disease, but not all of them tested positive for COVID-19, the BBC reported.

"It's a new disease that we think may be caused by coronavirus and the COVID-19 virus. We're not 100 percent sure because some of the people who got it hadn't tested positive, so we're doing a lot of research now, but it is something that we're worried about," Health Secretary Matt Hancock told LBC Radio, according to a Reuters report on Tuesday.

In Bergamo, northern Italy, which has been particularly hit by COVID-19, 20 children have been confirmed with Kawasaki disease since late March. The figure is roughly equivalent to the total number of cases over three years.

In France, there are around 15 children in Parisian hospitals with symptoms of Kawasaki disease, Olivier Veran, the French health minister, told France Info radio on Wednesday.

He said that "some of the children in France and Britain have been revealed to carry the coronavirus," and called for more data from the medical community to see if there is a link between the two illnesses.

In the United States, a 6-month-old girl in California who was admitted to hospital with Kawasaki disease tested positive for COVID-19, the Associated Press reported Tuesday. But it is not clear whether the illnesses had a causal link or are coincidences, Sonja Rasmussen, a pediatrics professor, told the news agency.

Reuters, meanwhile, reported Wednesday that at least three children in the United States infected with the coronavirus are being treated for Kawasaki disease symptoms in New York.

Mark Gorelik, a specialist treating them at Columbia University Medical Center in New York, was quoted as telling the newswire that he believes the cases are likely not Kawasaki disease, but a similar process shared by both with an infectious agent that triggers an immune response.

The World Health Organization has asked its "global network of clinicians to be on alert for this," said Maria Van Kerkhove, the institution's technical lead for COVID-19, at a press conference Wednesday.

"There are some recent rare descriptions of children in some European countries that have had this inflammatory syndrome, which is similar to the Kawasaki syndrome, but it seems to be very rare," she said.