Sumo: Asanoyama promoted to ozeki, ready to live up to new rank

Sekiwake Asanoyama was officially promoted to sumo's second-highest rank of ozeki on Wednesday by the Japan Sumo Association's board of directors.

The news provided a bright spot amid the coronavirus bleakness with Asanoyama saying in his kojo stage speech he is ready for the added responsibility and expectations ahead of the Summer Grand Sumo Tournament in May.

"I will live up to my name as ozeki and love the sport of sumo, fulfill justice as rikishi (sumo wrestler) and exert myself to the utmost," he said. "I want to be in the fight for the championship."

The Takasago stable wrestler posted 11 wins in the March 8-22 Spring Grand Tournament in Osaka that was held without spectators, an unprecedented measure taken to contain and combat the spread of the coronavirus. 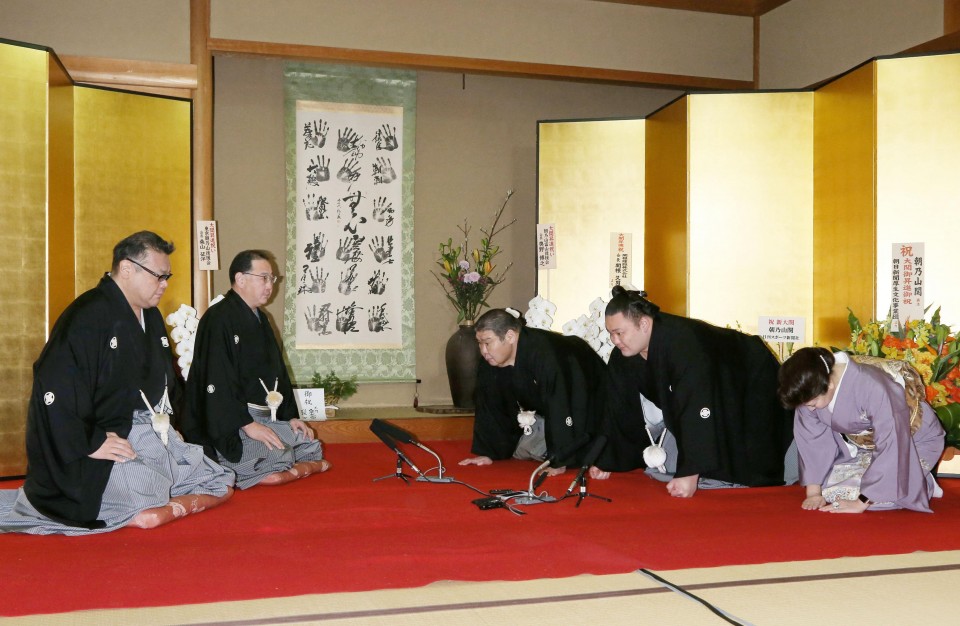 (Sumo wrestler Asanoyama (2nd from R), flanked by his stablemaster Takasago and Takasago's wife, bows to accept his promotion to ozeki.)

While he fell one short of the 33 wins over three tournaments normally required for ozeki promotion, the Toyama Prefecture native earned commendations for the quality of his sumo and had his elevation unanimously approved by the JSA.

He remained in title contention until the last days of the Spring meet and defeated demotion-threatened ozeki Takakeisho on the final day.

The 26-year-old, who said he is aiming to become a yokozuna, has already won one Emperor's Cup, as a rank-and-filer at last year's Summer tournament. 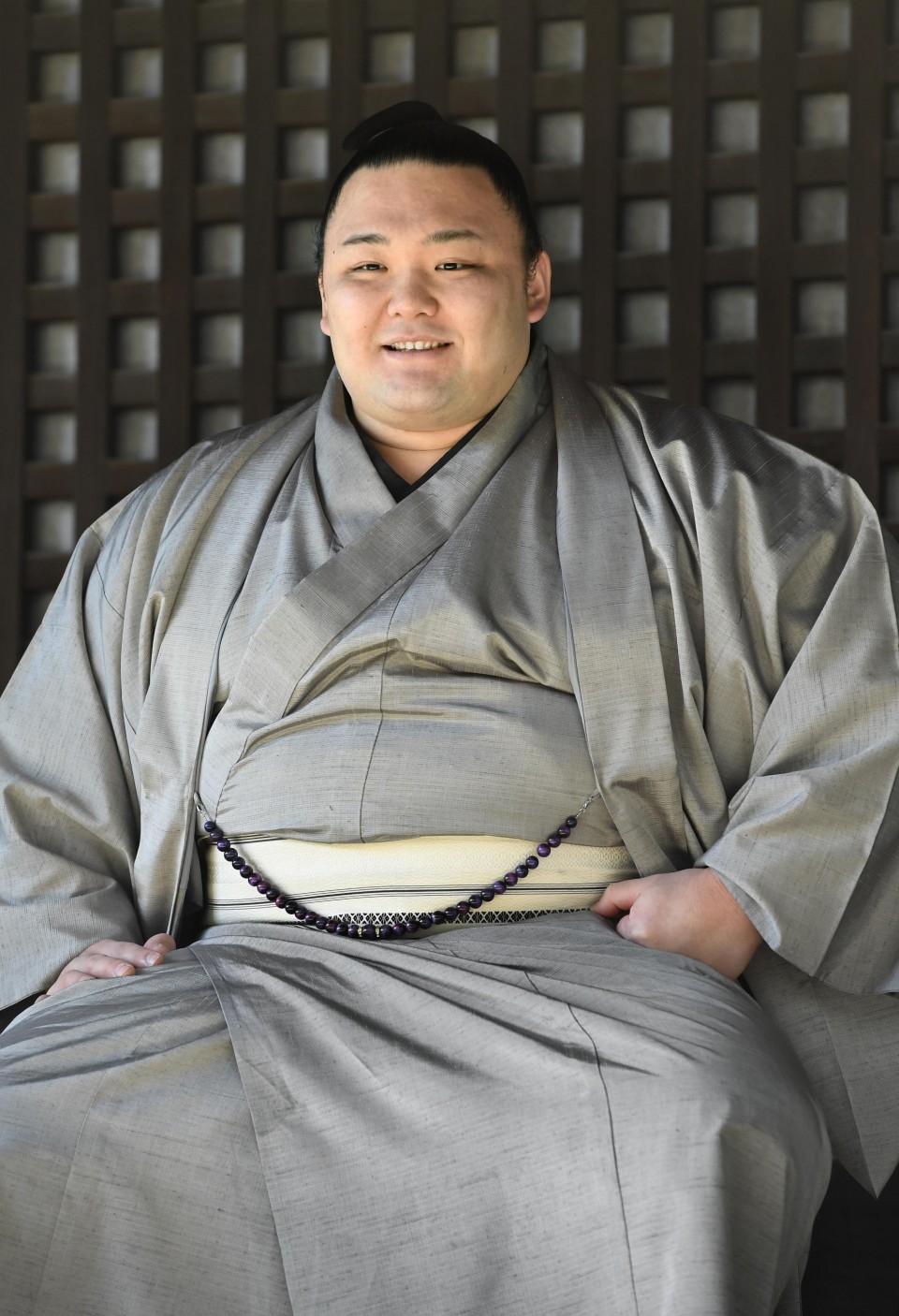 Asanoyama admitted he was nervous making the speech during the promotion ceremony -- which was also scaled down due to the virus -- but said he wanted to deliver it with confidence.

His stablemaster Takasago gave him a score of 100 out of 100 for his speech and applauded his wrestler for his hard work and dedication to training.

"The reality is gradually sinking in. It's been one of my dreams since I made my professional debut, but I didn't think I'd become ozeki so soon. I want to become an ozeki who is respected and looked up to as a role model," Asanoyama said.

The new ozeki is gunning hard to reach the sport's highest rank with the support of Takasago, saying he hopes he makes history for the stable by December when his stablemaster turns 65, the JSA's age of retirement. 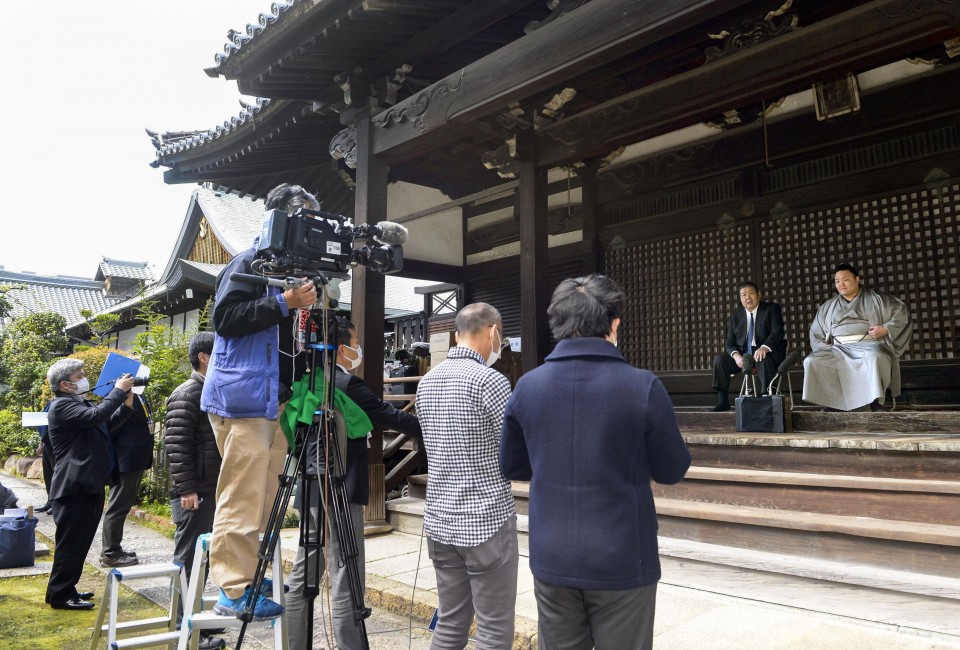 Asanoyama turned pro out of university in 2016 and made his top-division debut the following year. He is the first new ozeki since Takakeisho was promoted in March 2019, and first ozeki from Toyama in 111 years, former yokozuna Tachiyama being the last.

"I'll do my best to reach the level of the great grand champion Tachiyama," he said. "While I'm working on that, another dream of mine is have young kids in Toyama set goals and get them to become professionals."

Standing 1.88 meters and weighing 177 kilograms, Asanoyama has exhibited solid technique and impressive physical strength on the way to establishing himself as one of sumo's rising stars.

He has become a serious threat on the dohyo by masterfully getting his right arm inside his opponents' left for his favored "migi-yotsu" grip and forcing his challengers out.