On the 11th of every month since April 2019, groups of sexual violence victims and supporters have gathered throughout Japan in public spaces, to protest against unjust acquittals of sexual crimes and seek changes to the law.

Holding flowers in a show of solidarity for victims near Tokyo Station at a January event, hundreds in the "Flower Demo" movement braced against the cold as they listened to victims speak about their traumatic experiences for nearly two hours. 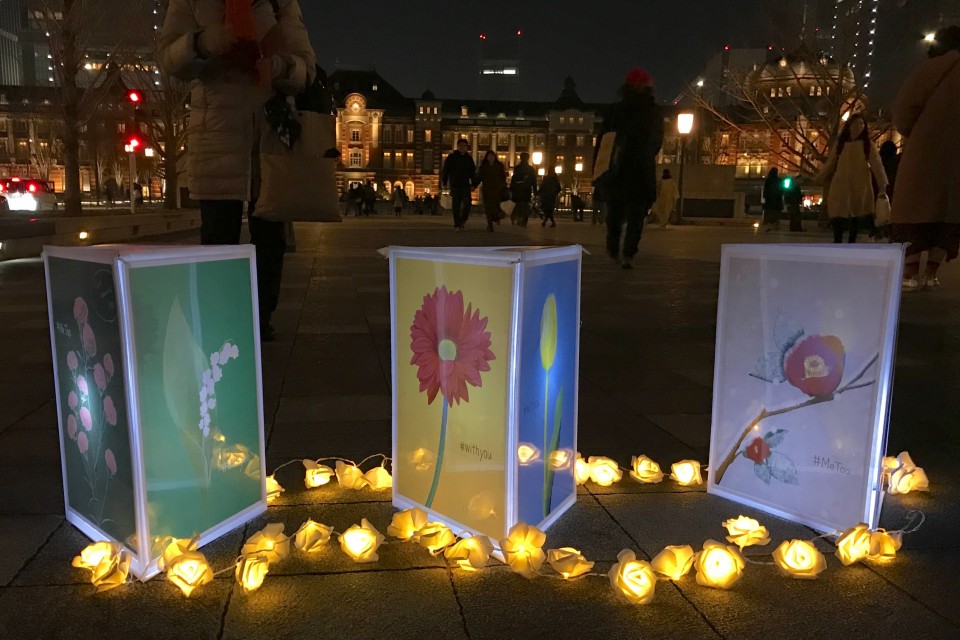 The crowd was separated, with those who did not wish to be photographed standing in one area. Audio and video recordings were tightly controlled with an organizer letting the crowd know whether or not the person speaking wished to be revealed on social media. Most of them did not.

Only women took the microphone that night, and almost none gave their names. But quite a few spoke, some wearing surgical masks or hoods over their heads. Others sat on the ground listening intently, periodically murmuring encouragements to the women.

A woman in her 50s, who wished to remain anonymous, told Kyodo News that she felt compelled to speak to the crowd about being raped by her father as a child.

"I spoke with the hope that younger people, especially, would not feel that they have to carry the burden alone as I did," she said. It was the first time she had spoken openly about being raped, she said.

Jun Masunari, 44, who said he had been the victim of multiple groping attacks by men and women, stood out as one of only a handful of men there to protest. Holding pink roses, he said he was conscious that a majority of perpetrators mentioned by the women at the rally were men.

"The Flower Demo is not really a place for men to speak out easily," said Masunari, who wore an anti-groping badge.

Flower Demo is a nationwide grassroots movement that was triggered by outrage over consecutive district court acquittals in March 2019 in four sexual assault cases.

In one case, the judge doubted a child's allegations of paternal rape, stating that a family member would have noticed.

Judges in the other cases recognized that the sexual acts were nonconsensual, but said the victims had not shown enough resistance.

For example, the judge ruled a father innocent of raping his 19-year-old daughter, arguing that the daughter had the power to resist him, although recognizing her as having been a victim of sexual abuse as a child.

The first demonstrations were held in Tokyo and Osaka in April 2019 after feminist activist and author Minori Kitahara called for them on social media, incensed by the verdicts and by the barrage of criticism leveled against those who questioned the acquittals. 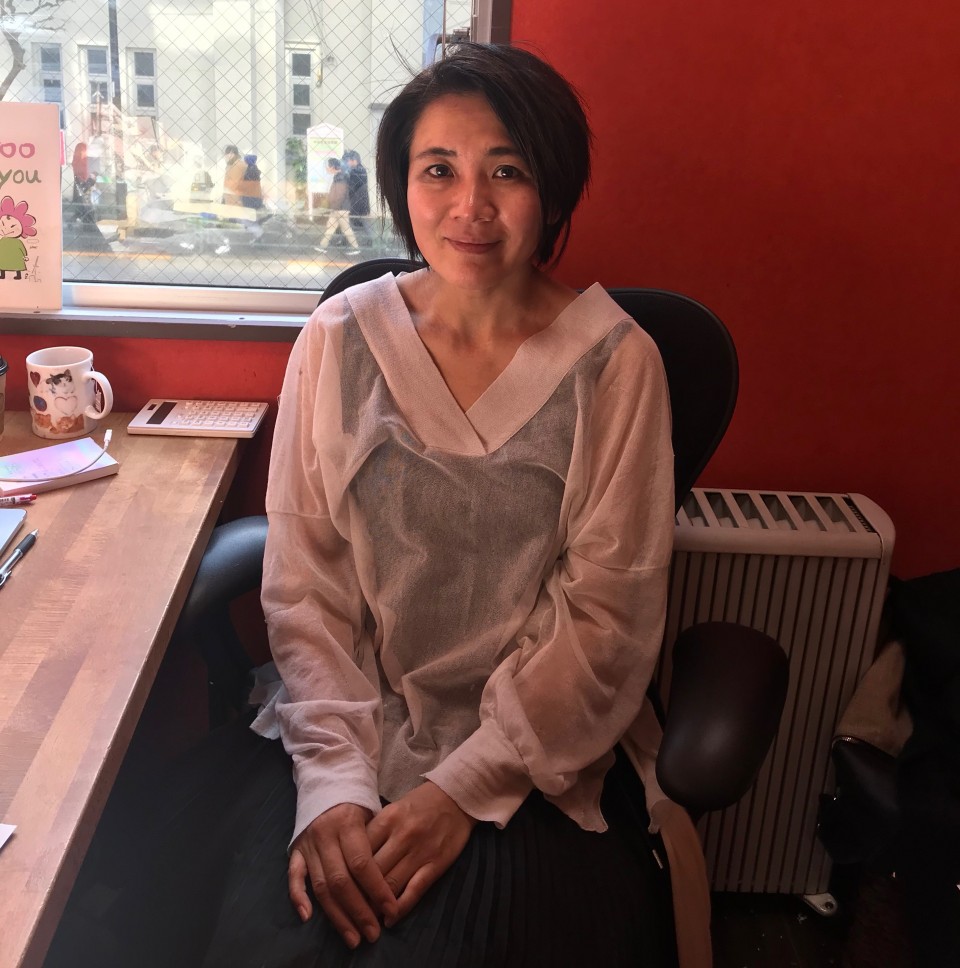 She had not planned to create a movement when she called for the April demonstrations, which were attended by around 500 people. But it was as if a dam had burst with many in the crowd asking to tell their own stories, prompting her to call for another rally.

The movement has spread since to all 47 prefectures and regions in Japan, with around 1,500 people coming together on average in recent months, Kitahara said. Demonstrations and online events have also been scheduled for Women's Day coming on Sunday.

"Survivors feel that they had been bottling up their experiences too long, that others had shut down their voices, and now they do not want to stay silent any longer," Kitahara said about the organic growth through social media.

The Flower Demo movement is far smaller and quieter than the #MeToo movement, which has dominated world headlines since 2017. It has no mass marches and few big voices promoting it, unlike in the United States and South Korea where vocal Hollywood stars and K-Pop stars are speaking out.

The #MeToo movement did not take flight in Japan because victims felt they had little social support, Kitahara said, echoing a similar explanation given by journalist Shiori Ito, who became the symbol of Japan's movement against sexual abuse after going public with a rape accusation against a famous former political journalist.

Ito's decision to reveal her face publicly and give her full name to accuse Noriyuki Yamaguchi of raping her in 2015 was a rare step at the time in Japan. Although prosecutors dropped the case, she won a civil suit against him in December last year.

To encourage survivors and help them feel less isolated, Kitahara, inspired by the South Korean movement, has been promoting the #MeToo hashtag to be accompanied by #WithYou, while Ito has been promoting a #WeToo Japan movement against sexual violence and a panoply of harassment issues, including over sexual orientation.

Three other human rights and activist groups -- Human Rights Now, Spring and VoiceUP Japan -- have garnered over 80,000 online signatures for a petition to change the country's Penal Code. 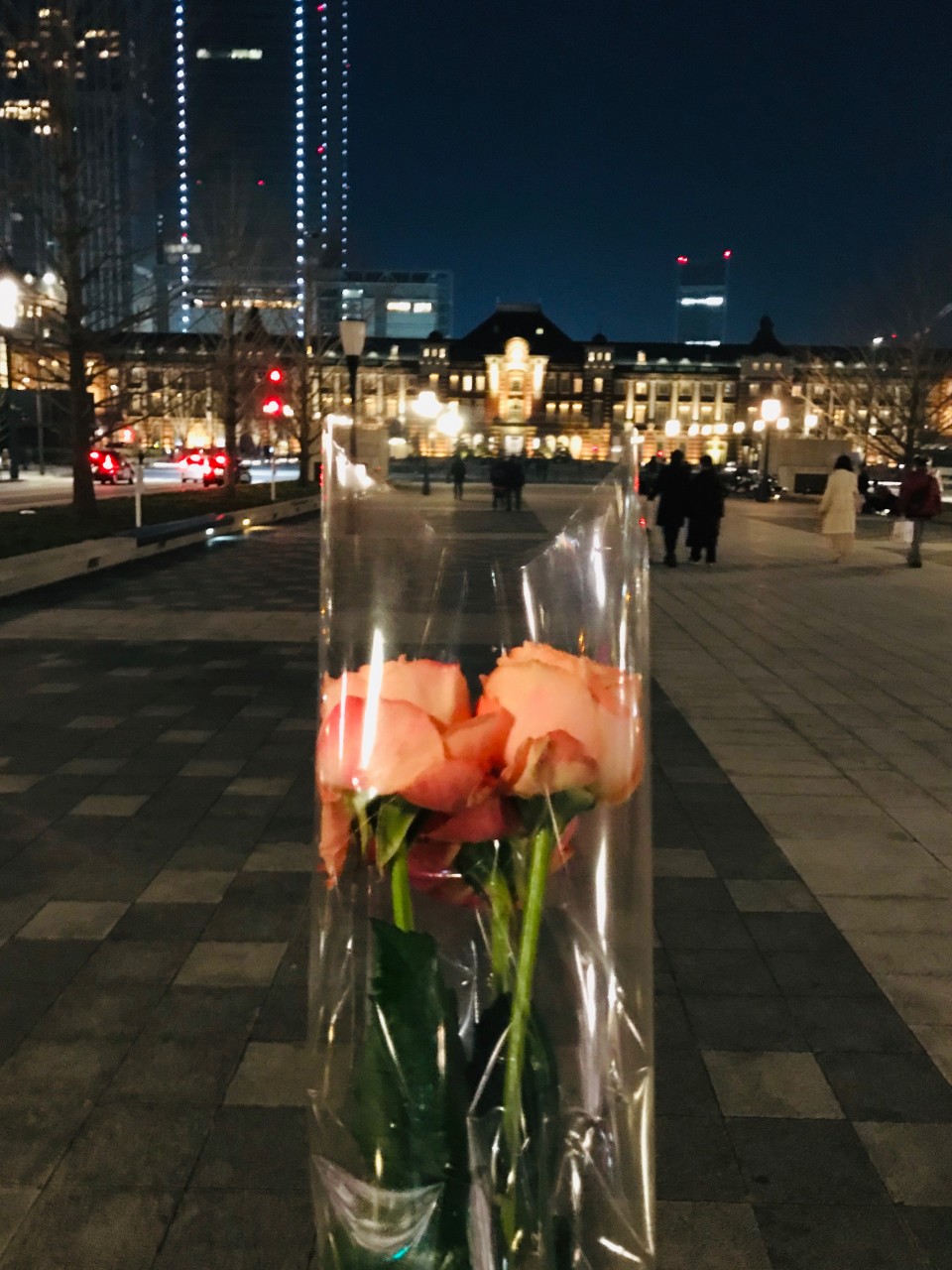 They plan to submit the petition to the Justice Ministry once they hit 100,000, said Kazuko Ito, an attorney and Human Rights Now's secretary-general. They did something similar in June last year after reaching more than 45,000 petitioners, she said.

The change also facilitates prosecution without a formal complaint from the victim, and establishes a new penalty for guardians who take sexual advantage of children under the age of 18, even if there is no evidence of coercion.

The government said at the time that it would "consider" further revisions in 2020.

The current law states that the victim must not have consented and that there be proof of the inability to resist due to physical violence or threat -- conditions activists argue make proving sexual assault impossible because of a misunderstanding that nonresistance in certain situations equals consent.

Activist demands for 2020 include raising the current age of sexual consent from 13, scrapping the statute of limitations for sex crimes, and heavier sentences.

But ultimately the goal is to have a law similar to Sweden's "Yes Means Yes," where sex without freely-given consent is sexual assault. So long as "violence and intimidation" are viewed as part of the definition of rape, activists say, the law will fail to recognize power dynamics and the "freezing" response that explains why a person may not fight or flee.

But it might be difficult to quickly achieve a clear-cut change to the law despite working-group discussions at the Ministry of Justice, said Ito of Human Rights Now.

As for revisions envisioned for 2020, she said, "It is difficult to think that there will be no change since there is public discourse, but in Japanese culture, change comes slowly."

Inadequate sex education and widespread gender discrimination have made it a labored process, Kitahara said. Add to this a culture of silence in Japan surrounding sexual assaults, and it is no wonder there has been little progress.

Embarrassment was the main reason for women not telling anyone, while men said they did not know whom to turn to for advice.

Victims do not immediately report cases because they question their experiences, which usually do not fit the violent stereotypes of sexual assaults, Kitahara explained.

"Most assault revolves around happy occasions, such as after drinks with co-workers, making it difficult for victims to immediately assign responsibility and blame. It is also extremely difficult to speak about being sexually assaulted by friends and bosses," Kitahara said.

"That's why it's important to clearly explain what sexual assault is so that everyone, including victims and potential perpetrators, will know," she added.

Survivors must also deal with "secondary victimization," also called "secondary rape" -- the insults, disbelief, and victim-blaming perpetuated by society over claims of sexual harassment and abuse.

Masunari, the man who alleges being groped, said when he tried to explain about being assaulted, most people refused to believe him, trivialized it, or said that he must have welcomed it in the case of female perpetrators.

Some victims are unsure or pessimistic about the prospect for change.

One educator in her 50s, who quit her job as a reporter almost a year after she said she was drugged and raped in 1993 by a section chief from a prefectural police department, is doubtful about making drastic changes to the law.

"The current administration espouses the belief that people are responsible for putting themselves in difficult situations, and therefore must resolve it on their own."

The woman who said she was the victim of child incest said, "Things may change only a little because even if the law does change, it does not mean that people will. What's important is changing societal awareness," she told Kyodo following her speech.