A Japanese high court on Thursday sentenced a 50-year-old man to 10 years in prison for raping his 19-year-old daughter in 2017, scrapping the lower court ruling that acquitted him last year.

The main focus of the trial had been on whether the daughter was able to resist her father, and the Nagoya High Court recognized the victim was unable to do so in handing down the sentence as sought by prosecutors. 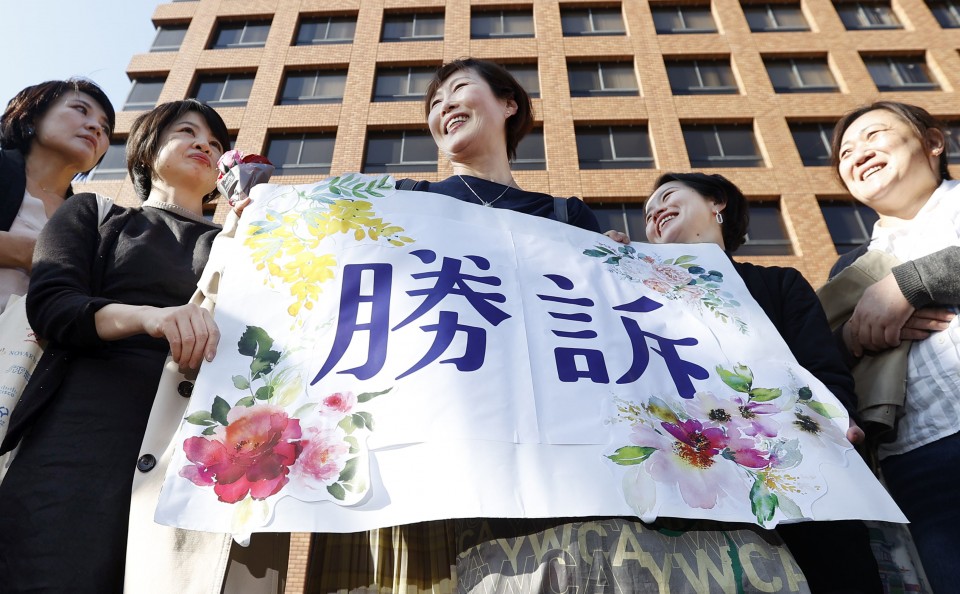 (Supporters of the Flower Demo movement against sexual violence hold up a "win" banner in front of the Nagoya High Court on March 12, 2020.)

"I have been full of frustration for being harmed by my own father," the daughter said in a statement after Thursday's ruling. "I finally feel a little relieved."

The case attracted much attention as the lower court decision in March last year, along with similar acquittals in the same month over sexual assault cases, triggered "Flower Demo," a nationwide grassroots movement, to protest the court decisions and eradicate sexual violence.

"It was a despicable crime as he preyed on (the daughter) for his sexual gratification, and it is also evident that he engaged in it habitually," Presiding Judge Mitsuru Horiuchi said in handing down Thursday's ruling.

The father was indicted for sexually assaulting the daughter at his office in August 2017 and at a hotel in September that year.

"The daughter's psychological distress is extreme and serious, exacerbated by the fact that the perpetrator was her own father," the judge also said, adding that the repeated sexual abuses sapped the daughter's will to fight her father, making her psychologically unable to resist him.

Some observers in the courtroom clapped, including some who had tears in their eyes after the judgment was read.

The high court decision overturned the ruling by the Okazaki branch of the Nagoya District Court, which recognized she had sex with her father against her will but acquitted him on the grounds she could have resisted if she wanted. The district court also found he had sexually abused the daughter for several years.

It was a "good and appropriate" ruling that recognized the victim's pain, said Masateru Iwaki, a lawyer who represented the daughter, at a press conference. "I have been a lawyer for more than 30 years, but this is the first time that a sentence has made me cry."