Yokozuna Hakuho fell into a two-way tie for the lead Tuesday following his first defeat of the Spring Grand Sumo Tournament, while fears about the possible cancellation of the meet subsided after a fever-stricken wrestler tested negative for the new coronavirus.

Hakuho was put to the test by No. 5 maegashira Onosho (6-4) in the penultimate bout of Day 10 at the empty Edion Arena Osaka.

The Mongolian-born yokozuna failed to get ahold of the frenetic rank-and-filer, who circled around and plowed Hakuho straight off the dohyo before the grand champion could mount a defense.

The other yokozuna, Kakuryu, quickly muscled No. 5 Ryuden (4-6) over the straw to find himself within a win of his colleague at 8-2 after Hakuho's shock upset. 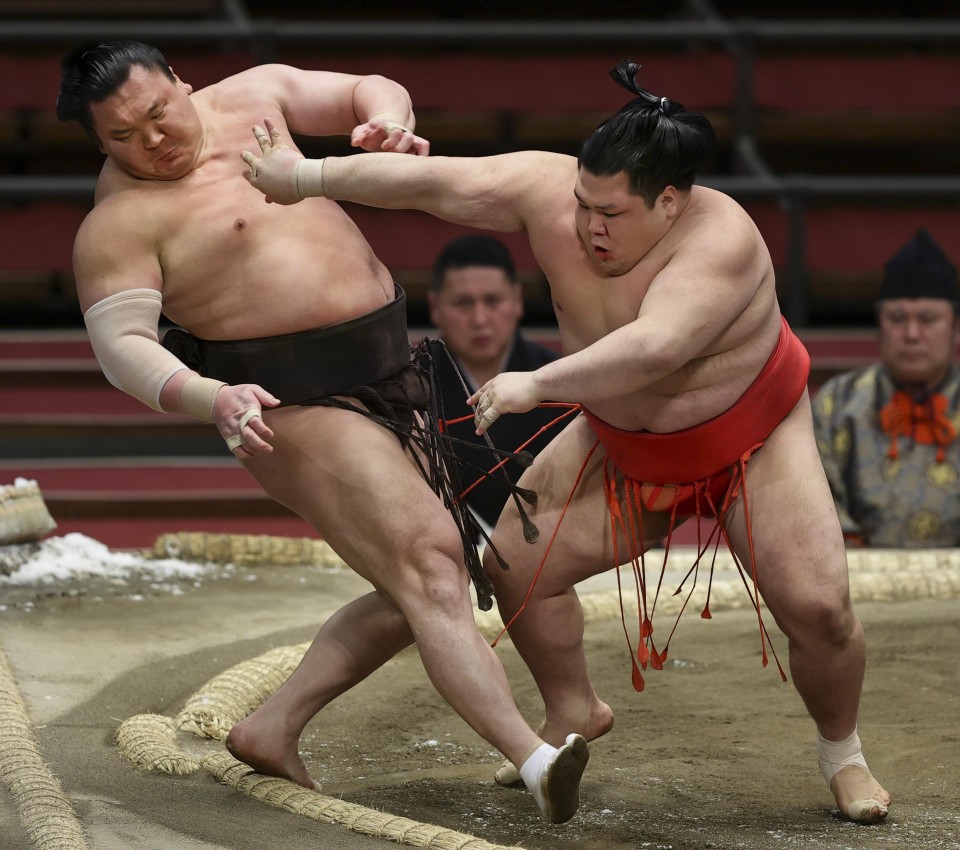 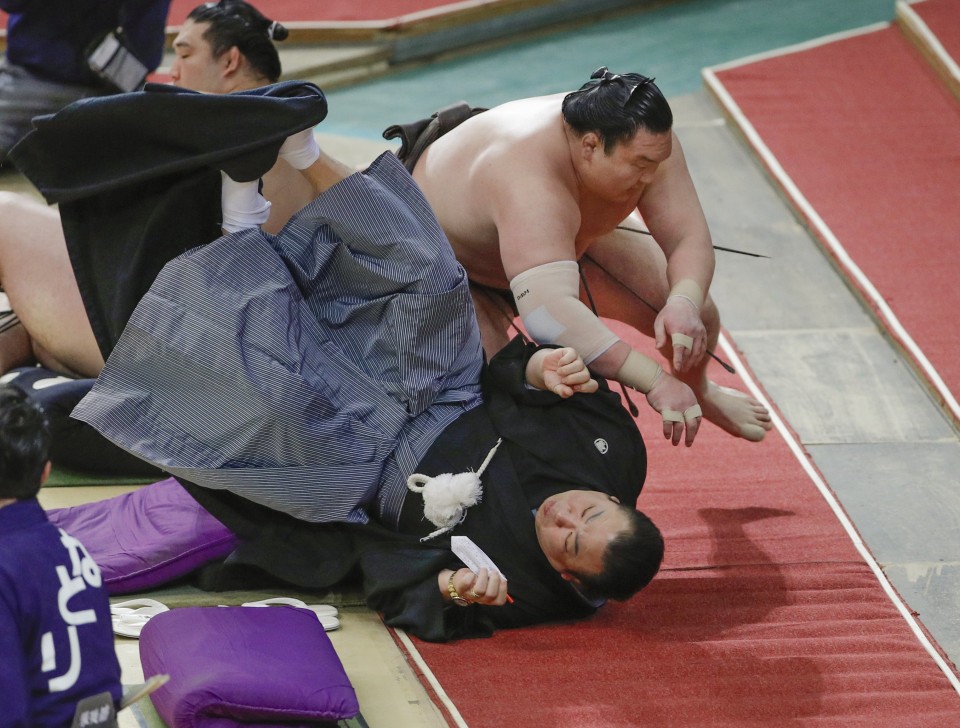 The remainder of the 15-day meet, being held without spectators as a safety measure against the virus, had been cast into doubt when No. 15 Chiyomaru pulled out with a fever and recorded a temperature of over 37.5 C for two straight days.

Chiyomaru was diagnosed at a local hospital as likely having a bacterial skin infection but underwent a coronavirus test Monday to be safe. The Japan Sumo Association announced a negative result before the start of matches Tuesday. Chiyomaru will return to the meet on Wednesday.

The JSA decided to hold the grand tournament without spectators for the first time in the sport's history on the understanding it would immediately cancel the meet should a wrestler or association member test positive for the virus.

In other action, the two men who entered Day 10 one win behind sole overnight leader Hakuho had mixed fates. No. 13 Aoiyama improved to 9-1 for a share of the lead, while No. 9 Takanosho (8-2) succumbed to his second loss but kept his place on the leaderboard. 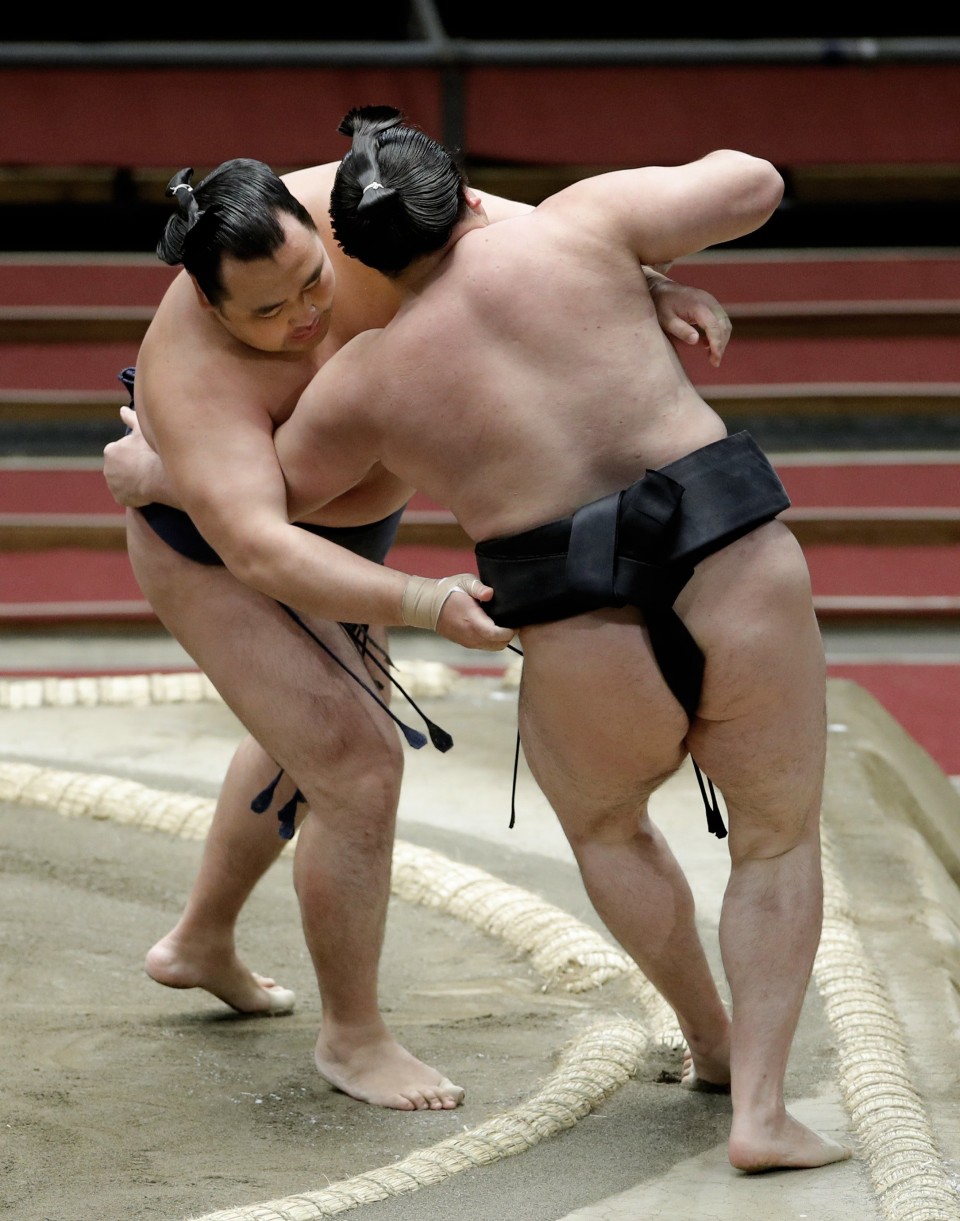 Aoiyama wasted little time dispatching No. 16 Shimanoumi (5-5), who had no answer for the Bulgarian's powerful shoves and was quickly driven over the straw.

But Takanosho faltered in his match against No. 7 Takarafuji (7-3), getting the better of the initial clash but overextending his reach as Takarafuji sidestepped and forced him down to the clay.

Ozeki Takakeisho was slapped down by sekiwake Shodai as both wrestlers moved to 5-5. Takakeisho took Shodai to the straw twice but the sekiwake skillfully jumped aside and let the ozeki's momentum do most of the damage.

Sekiwake Asanoyama and No. 3 Mitakeumi both prevailed on day 10 to join Kakuryu and Takanosho at 8-2, one win off the pace.

Asanoyama racked up another win in his bid for an ozeki promotion, beating No. 4 Enho (3-7). The division's lightweight had Asanoyama chasing him around the ring but stepped out as the sekiwake kept him on the ropes with a relentless shoving assault.

Mitakeumi hit komusubi Endo (5-5) hard with his initial charge and bulldozed the fan-favorite over the straw.

Hokutofuji (2-8) fell to his eighth defeat and ensured a losing record. The returning komusubi struggled to gain ground against No. 6 Myogiryu (3-7) and was pulled down by the arms while trying to connect on a thrust.