Infected man in Japan who wanted to "spread virus" dies

A man infected with the novel coronavirus who went out to drink earlier this month after saying he wanted to "spread the virus" died Wednesday at a hospital in central Japan, local authorities said.

After testing positive with the pneumonia-causing virus on March 4, the 57-year-old man from Gamagori, Aichi Prefecture, went to two drinking establishments in the city that evening despite being requested by health officials to remain at home. The local authorities said they did not have the power to prohibit him from going out.

The man's death was due to pneumonia caused by the new coronavirus, the prefecture said, adding he developed a fever and respiratory abnormalities shortly after being admitted to the hospital on March 5. He was suffering from hepatocellular cancer.

Police launched an investigation into the man, whose identity has not been released, last Friday after a woman in her 30s working at a Filipino pub tested positive for the virus, which originated in China and causes COVID-19. The woman's nationality has not been disclosed.

The police had planned to question him on suspicion of obstruction of business after he left the hospital. 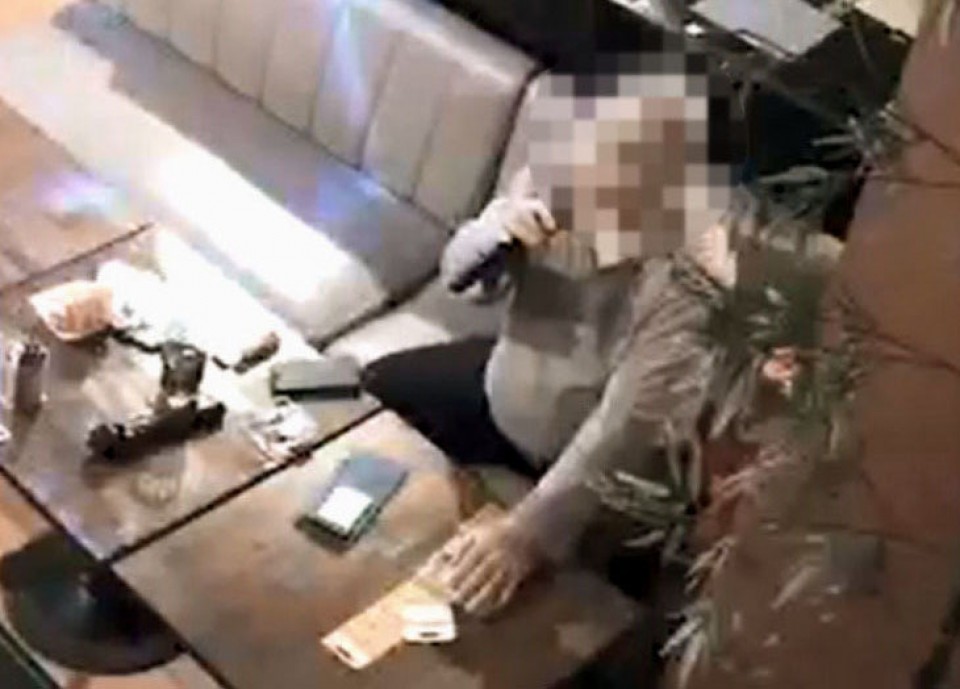 (Photo taken March 4, 2020 shows a man infected with the new coronavirus at a pub in Gamagori, Aichi Prefecture.)
[Photo courtesy of the pub operator]

The man spent 15 minutes at an "izakaya" Japanese-style drinking establishment before going to the pub for about 40 minutes, according to Gamagori city officials.

At the Filipino pub, the man sang karaoke and put his arm around a female employee who was serving him, a source knowledgeable of the situation said.

Although the female employee tested negative for the virus, another female worker developed a fever on March 8 and later tested positive, officials of Toyota city, also in Aichi, said last Thursday. The woman lives with her family in the city.

Both the izakaya and the Filipino pub temporarily suspended business from March 4, with the pub manager filing a complaint with the police last Friday regarding disruption of business.

The man had tested positive for the virus a day after his parents, with whom he lived, were found to be infected.

Before taking a taxi to go out drinking, the man told his parents he wanted to "spread the virus," according to the Gamagori city officials.

Aichi Prefecture currently has the second highest number of domestic COVID-19 infections at about 120, after Hokkaido, where some 150 cases have been confirmed.

Japan has so far found 13 clusters of people infected with the pneumonia-causing virus, according to the health ministry, including one at a day-care center for the elderly in the central Japan prefecture.

In a separate incident, police on Monday arrested a man in Kiryu, Gunma Prefecture, on suspicion of obstructing business after he told passengers on a train he was infected with coronavirus, causing the operator to suspend the line for around an hour.

The 54-year-old man, Kiyoshi Kogure, was confirmed not to be infected with the virus and was drunk at the time of the incident, according to the police.