Sumo: Hakuho victorious on Day 1 in front of empty arena

Hakuho made a winning start to the Spring Grand Sumo Tournament on Sunday, overpowering Endo at an empty Edion Arena Osaka.

The 15-day tournament is taking place behind closed doors after the Japan Sumo Association earlier this month made the unprecedented decision to keep out spectators to help combat the ongoing coronavirus outbreak.

Before the top-division bouts kicked off, JSA Chairman Hakkaku delivered an address in which he thanked sumo fans for their continued support despite the tournament being held under such unusual conditions.

"For the wrestlers, this meet will be very difficult, but we are grateful for fans voicing encouragement," Hakkaku said.

"We hope to meet the expectations of everyone watching on television."

Former ozeki Kotoshogiku likened competing in the subdued atmosphere to a religious rite.

"It has a sanctified feel to it, like going to a (Shinto) shrine," said the 36-year-old, who is now fighting near the bottom of the upper-division rankings as a No. 13 maegashira. "Yet again I felt that this is indeed a sacred place, and I want to give it all I have." 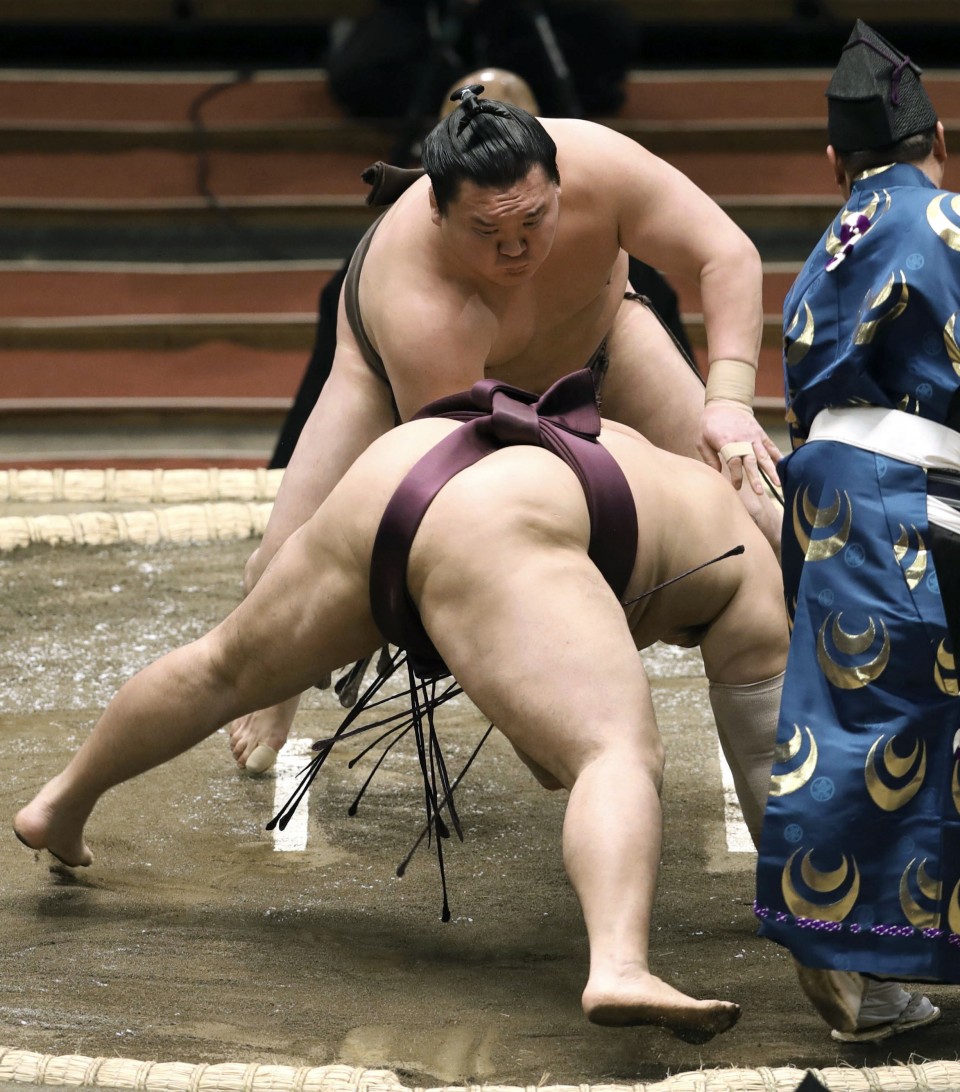 Grand champion Hakuho, who will turn 35 on Wednesday, is aiming to extend his record for career championships to 44. Both he and fellow Mongolian-born yokozuna Kakuryu pulled out of the previous New Year Grand Sumo Tournament in January due to injury.

Hakuho opened with a hard slap to the face of komusubi Endo, who appeared to lose his footing before getting yanked to the clay by the all-time great, who took Japanese citizenship last year.

The resounding win was payback for Hakuho, who lost to Endo in January before withdrawing with a fever caused by a skin infection.

Kakuryu had little trouble dispatching No. 1 maegashira Daieisho, claiming a quick victory by rear push out. Daieisho charged hard at the jump, but Kakuryu showed quick footwork to get behind the former komusubi and send him over the straw with a shove in the back.

Takakeisho, the sole ozeki following the retirement of Goeido, outmaneuvered No. 1 Takayasu to improve to 5-6 in their head-to-head meetings.

Takayasu opened with a hard hit but Takekeisho held firm against the former ozeki, stepping to the side to move him off balance before shoving him out. 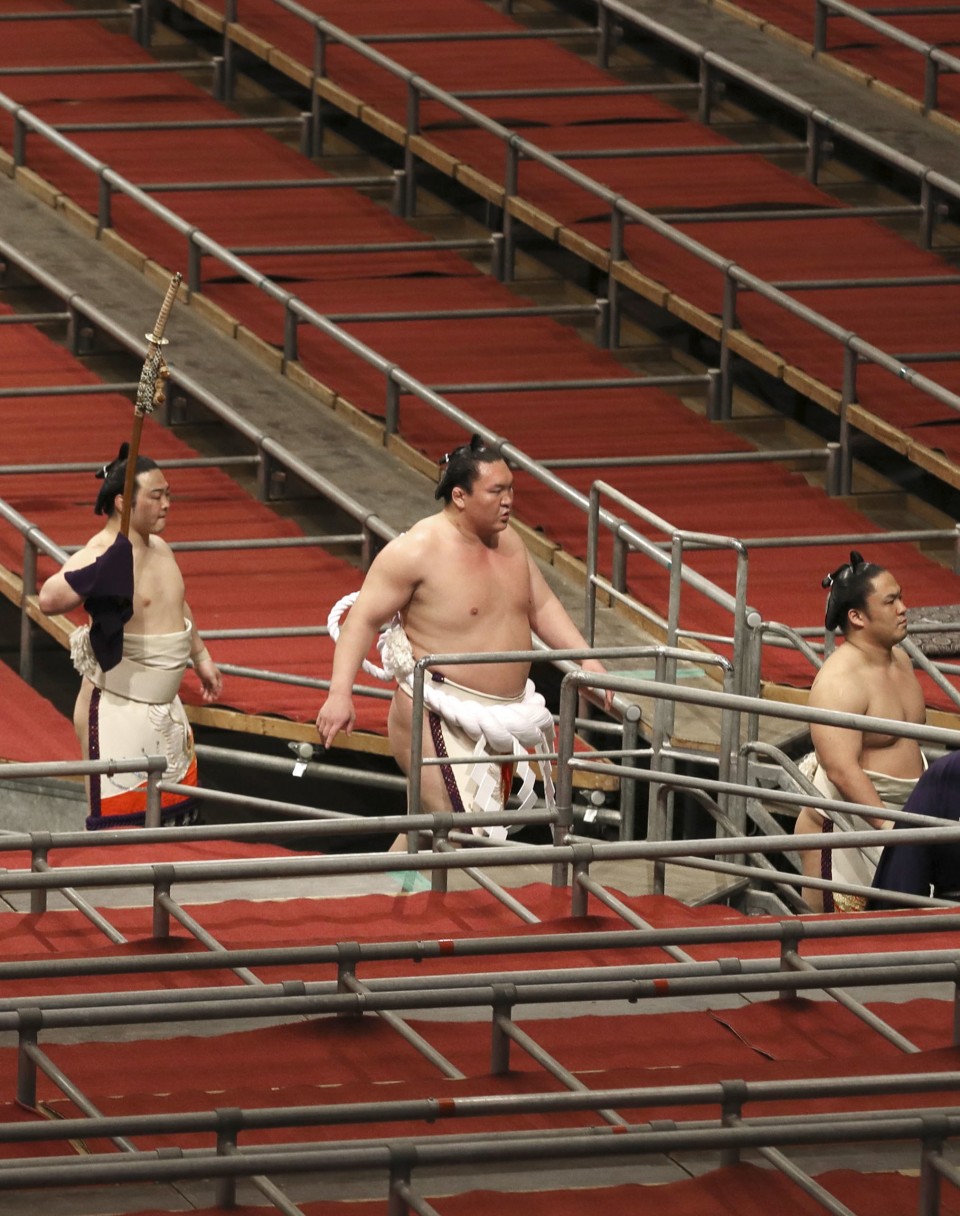 Sekiwake Asanoyama opened his bid for a second Emperor's Cup by forcing out No. 2 Okinoumi. The winner of last year's summer tourney took a belt grip but was made to work by Okinoumi, who resisted two force out attempts before succumbing to a third.

The 26-year-old Asanoyama is aiming for promotion to sumo's second-highest rank after going 10-5 in January. Should he win 12 bouts here, he will reach 33 wins over three meets, one of the standards for ozeki promotion.

Sekiwake Shodai -- fighting in one of the three "sanyaku" ranks below yokozuna for the first time in three years -- secured a straightforward win against No. 2 Tokushoryu, the surprise winner of the New Year tournament.

The Tokitsukaze stable grappler took a left underarm grip at the jump and quickly shoved his larger opponent over the straw.

Komusubi Hokutofuji, also making his sanyaku return, lost to No. 3 Yutakayama. With neither gaining the upper hand at the opening, Yutakayama won a pushing and thrusting battle to claim victory by frontal push out.

Popular No. 4 Enho, the smallest and most entertaining wrestler in the makuuchi division, said the lack of a crowd left him without his usual spark.

"My fighting spirit wasn't there," he said after his loss to No. 3 Mitakeumi. "Whatever it was I was fighting for today, I couldn't find it. I need to find some inspiration."