Myanmar still free of COVID-19 despite rising cases in neighbors

Myanmar still claims to have avoided the coronavirus pandemic despite being surrounded by three countries battling the virus, including China where the outbreak started.

As of Friday evening, 176 suspected cases have been tested since January, with none having returned a positive result, according to the government. Additionally, 12 suspected cases are still awaiting test results, the latest health ministry update said.

Although no confirmed case has been identified, the authorities are taking measures to prevent the virus from gaining a foothold in the country. 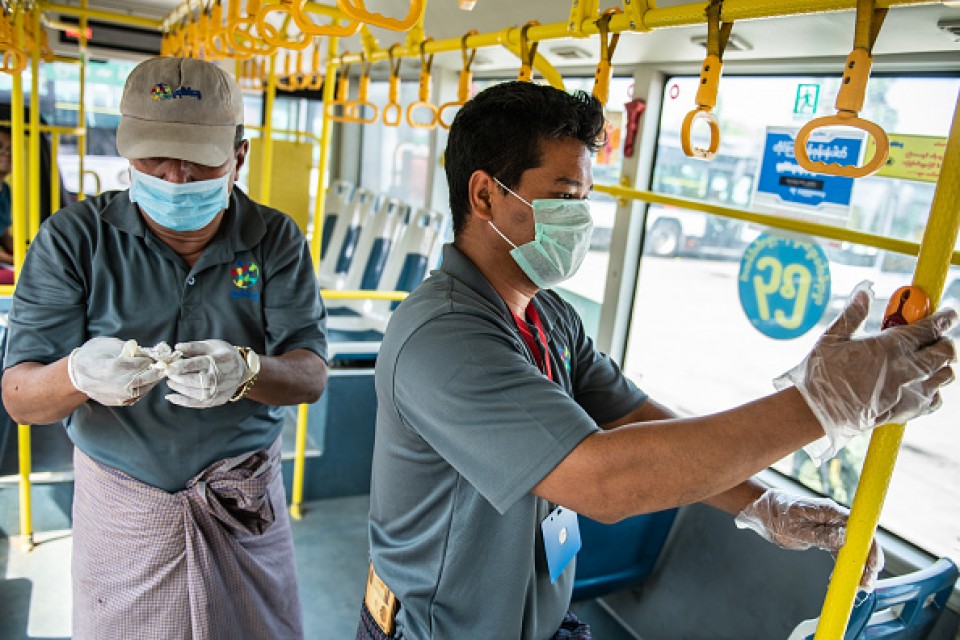 (Workers disinfect a bus, amid concerns of the COVID-19 coronavirus, in Yangon on March 19, 2020.)
[NurPhoto/Getty/Kyodo]

Strict temperature screening and health checks are being implemented at shopping malls, hotels and restaurants and occasionally even at parking lots since mid-February.

The government led by Aung San Suu Kyi has decided to cancel most events and celebrations involving mass gatherings, including the annual water festival Thingyan held in mid-April.

It has also ordered the closure of cinemas, bars and karaoke bars until the end of April.

Suu Kyi's administration has announced tax relief plans for small businesses and low-interest loans for the garment sector, aiming to keep factories running and to minimize the impact on the economy.

On Friday, the government suspended visas on arrival and e-visa systems temporarily for all foreign nationals as part of its stepped-up precautionary measures.

It also began enforcing a compulsory 14-day quarantine for all travelers arriving from or having visited the United States and eight more European countries including Britain during the past two weeks.

Myanmar shares a nearly 2,200-kilometer land border with mainland China, where the coronavirus outbreak began, and a 2,400-km border with Thailand, which announced 89 more cases Saturday.

The country also shares a 1,600-km border with India, which has over 270 confirmed cases.

Tokyo Olympics must not go on, Washington Post says