As Malaysia ordered a two-week nationwide lockdown to curb the spread of the new coronavirus, a horde of workers commuting daily to Singapore formed a long queue at the border checkpoints to make it in before the measure took effect midnight Tuesday.

Singaporeans affected by the shuttering of commercial activities in the neighboring country also rushed home, exacerbating the traffic jam at the border. Those Singaporeans included holidaymakers who were forced to leave hotels as they were suspending operations due to the lockdown.

Facing the highest number of coronavirus infection cases in Southeast Asia at over 670, Malaysia on Wednesday prohibited entry of foreigners and barred Malaysians from traveling abroad. Those who return from abroad must be screened and self-quarantine for 14 days. 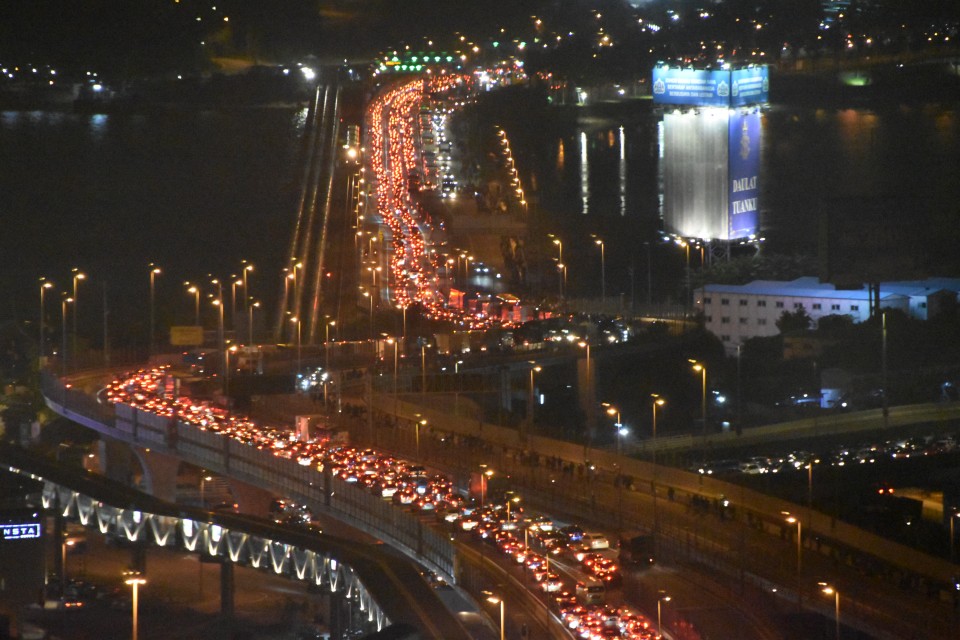 (Traffic congestion is seen at a causeway linking Malaysia's southernmost state of Johor (foreground) to Singapore (background) at night on March 17, 2020.) 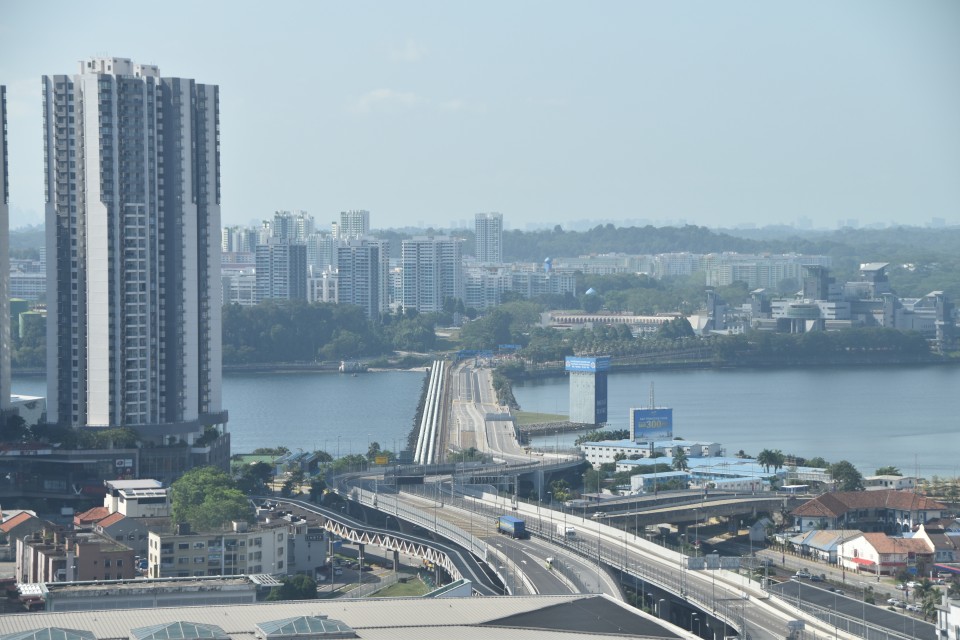 (A deserted causeway linking Malaysia and Singapore as seen in the morning on March 18, 2020.)

All public activities, including those of religious nature, have to be postponed, and businesses must shut down except for markets and shops that sell daily necessities. Schools are also closed.

In Johor Baru, Malaysia's southernmost city on the border with Singapore, the exodus of people caused traffic to be snarled on Tuesday night with a long snakelike line of vehicles heading to Singapore's immigration checkpoint.

For thousands of Malaysian workers commuting to Singapore, in particular, making it through the border before midnight was crucial to continue to work in Singapore for the next two weeks.

Alif Nasir, a 27-year-old man who works as an air-conditioner technician in Singapore, was trying to get to the city-state before midnight after collecting his clothes from his home in Malaysia for the two weeks he would have to stay put in Singapore.

He had found temporary accommodation at a Singaporean colleague's home, but was not sure if he would be able to make it into Singapore in time due to the traffic jam.

"If I cannot make it, I will just have to go back to my grandmother's house to help my grandfather, a corn farmer, grow corn," he said.

The congestion on the road leading to Singapore was likely spurred in part by its recent requirement for anyone coming from other Southeast Asian countries to self-isolate for 14 days upon arrival. The rule exempts Singaporeans and Malaysians arriving via the land route. 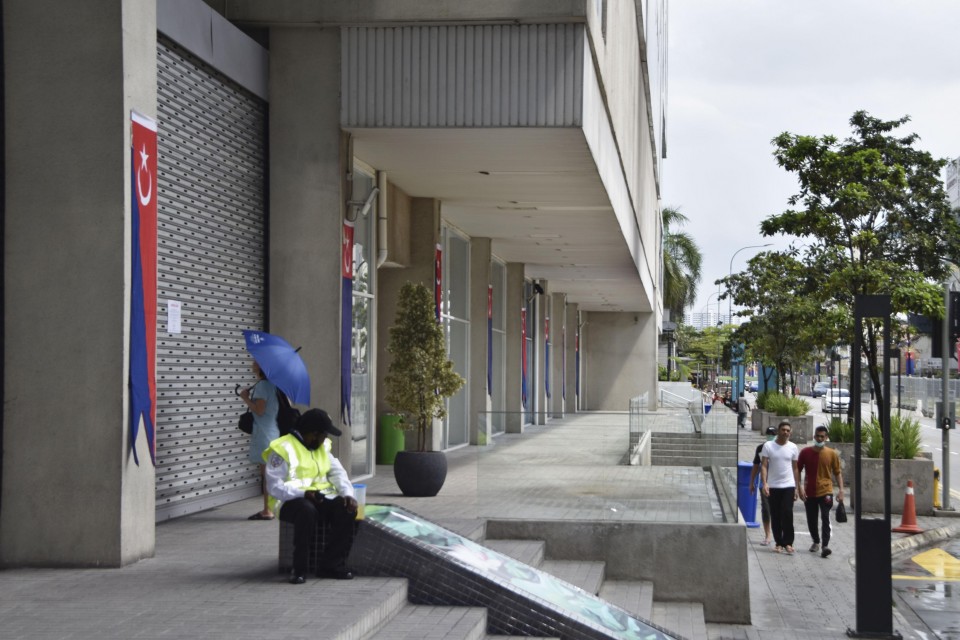 The exemption reflects the fact that an estimated 300,000 people commute daily via two causeways that connect the two countries, including a large number of Malaysians who have taken higher-paying jobs in Singapore while enjoying a relatively lower cost of living in their home country.

Concern over a potential economic impact of the Malaysian lockdown is mounting in Singapore, which depends on its northern neighbor not just for its water and food supply but also for workers to run its economy.

Many Singaporeans rushed to supermarkets to stock up on groceries when they heard of the lockdown, even though their government assured them that it had already been diversifying its sources of food supply beyond Malaysia.

Many employers in Singapore, especially those involved in critical services such as the city's bus operators, rushed to find accommodation for their workers who are hit by the lockdown. The bus operators employ a considerable number of Malaysian drivers.

Reacting to news of Malaysia's decision to lock down the country, Singapore Prime Minister Lee Hsien Loong said on Facebook that he received reassurance from his Malaysian counterpart Muhyiddin Yassin that the flow of cargo between the two countries would continue, including food supplies. 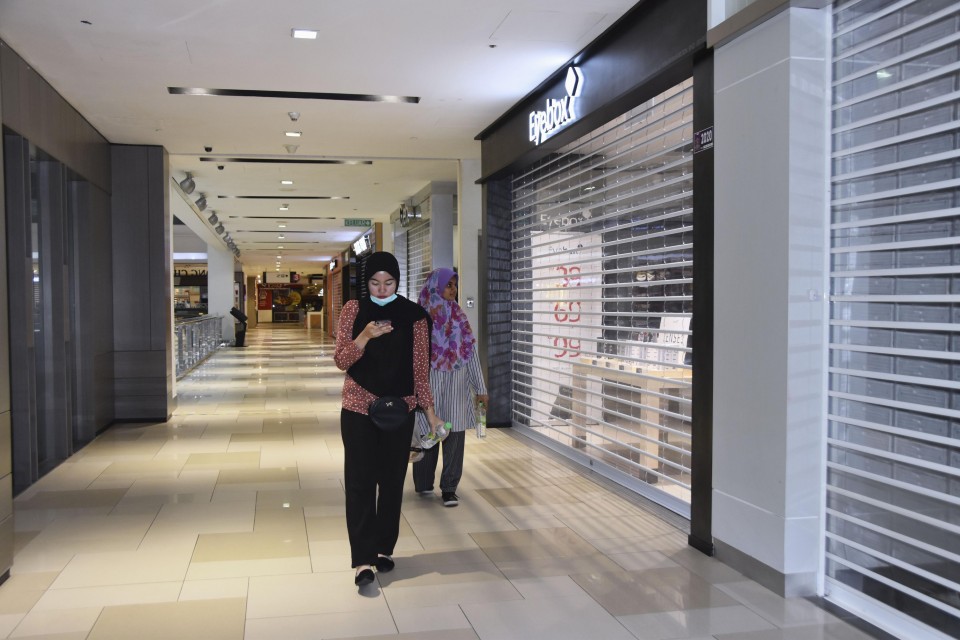 The American Chamber of Commerce in Singapore on Tuesday expressed concern about the economic impact the Malaysian lockdown would have on the economies of both countries.

Noting that U.S. companies in Singapore depend on the continued flow of people and goods across the border, the chamber called for special exemptions to be made when it comes to Malaysia's movement restrictions for its nationals who work in Singapore.

"These exemptions should prioritize workers that provide essential services such as health care, financial services, manufacturing," the chamber said in a statement.

Japan to ask 14-day self-quarantine for travelers from Europe

Infected man in Japan who wanted to "spread virus" dies